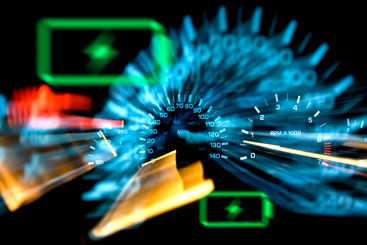 However, the batteries that are going to power the automobile industry’s transition to electric vehicles are going to need lithium. Given the firm’s position as an industry leader in the lithium market, Albemarle’s share price could recharge. 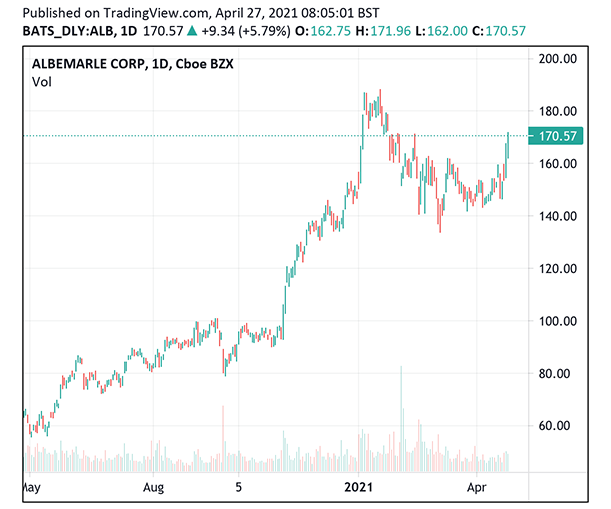 Lithium-carbonate prices have soared this year as the automobile industry makes the switch to electric vehicles. Over the next decade, this demand will only increase. Tesla [TSLA] is eyeballing 20 million EV sales by 2030; that same year Volkswagen [VOWG] wants 25% of its sales to be from EVs, and five years later in 2035 General Motors [GM] aims to stop selling petrol cars altogether.

To meet the automobile sector's ambitious targets, lithium producers will need to expand production, which could be good news for Albemarle's share price.

Evercore ISI analyst Stephen Richardson believes Albemarle’s share price still has more upside left in it. On 19 April, the analyst raised his rating on the stock from hold to buy, along with a adding a $200 price target – hitting this would see a 24% upside on Albemarle’s share price as of 23 April’s close. Richardson describes Albemarle – one of the biggest and most diverse lithium producers – as the “800lb gorilla in the lithium market”. Upcoming plans to expand production by 300,000 metric tons could allow it to “take advantage of increasing lithium prices and a tightening demand outlook.”

Further backing came in March from Cowen & Co, which initiated coverage on Albemarle’s share price with an outperform rating, while Loop Capital upgraded its rating from hold to buy.

Albemarle's financials were hit by the COVID-19 pandemic, with net sales coming in at $879.1m in the fourth quarter, an 11.4% drop from the $992.6m seen in the same period last year. Lithium sales came in at $358.6m, down 12.8% from $411.1m year-on-year. For full year 2021, the company expects lithium volumes to increase due to efficiency improvements in North America.

Completion of its La Negra and Kemerton expansion projects should lead to greater sales volume by the start of 2022. /p>

“Longer-term, we expect lithium demand to grow in line with greater EV adoption. We are accelerating our lithium growth projects to capitalize on this trend and generate strong investment returns,” Albemarle said in its fourth quarter results.

Lithium as an investment theme has been a strong performer on our thematic screener, gaining circa 158% this past year and approximately 9% in the past month (to 23 April’s close).

This bullishness is reflected in Wall Street, where lithium companies have received a string of upgrades. B. Riley’s Lucas Pipes started coverage of Lithium Americas [LAC] at the end of March with a buy rating and CA$25 price target – well above the current share price of CA$17.76 (as of 23 April’s close). Pipes cited a project in Nevada called Thacker Pass where Lithium America will mine for the ore. As most lithium is produced in South America and Australia, a US mine offers benefits such as lower freight rates and sourcing risks.

Along with Albemarle, Evercore ISI analyst Stephen Richardson also upped his target on Livent [LTHM] from $10 to $20, arguing that recent price weakness in the stock could represent a buying opportunity. Livent’s share price has dipped due to rising coronavirus cases in Argentina, where it operates.