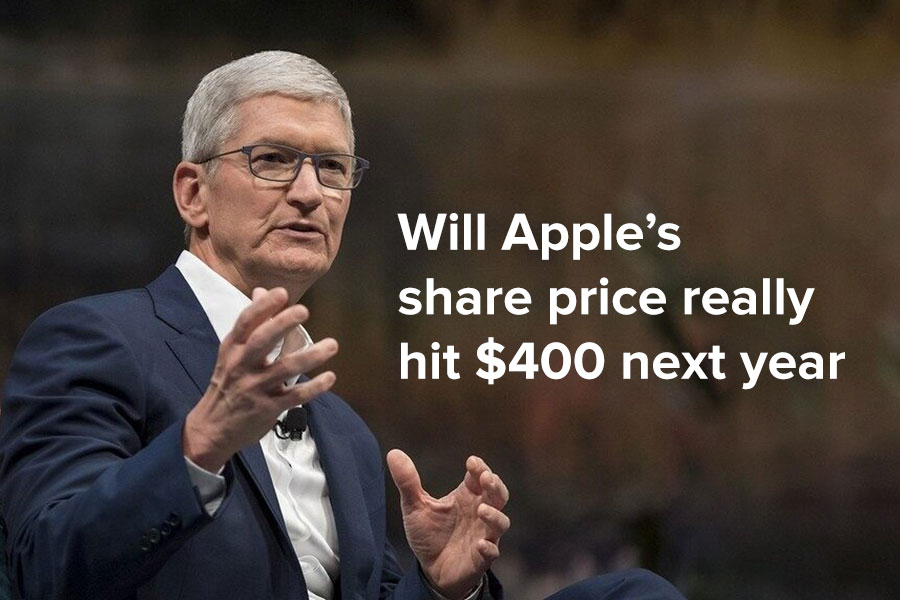 Apple's [AAPL] share price has proven more resilient than most during the coronavirus outbreak. Despite supply chain disruption in China, the stock is up 2.8% this year, trading above pre-outbreak levels.

Strong hardware sales and demand for its subscription services have helped - validating Apple’s decision to diversify its business model. However recent Q2 earnings revealed falling iPhone demand. But with the future of the global economy so uncertain, what’s the outlook for Apple’s share price? And can that share price really hit the $400 level by Autumn next year, as one analyst suggests? 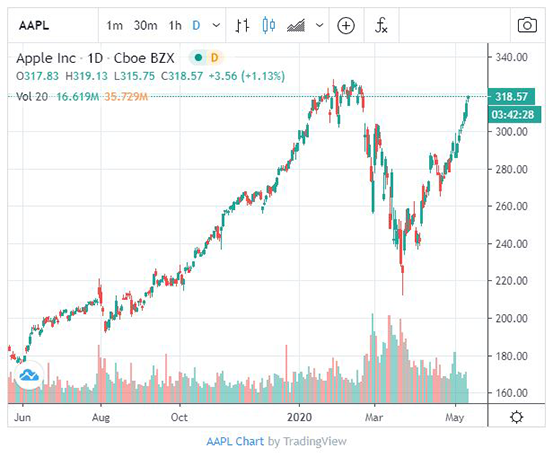 Apple’s share price has been boosted by robust earnings results, in spite of the bleak economic output. Apple saw earnings per share come in at $2.55 a share, beating Wall Street's expectations of $2.26 a share. Revenue came in at $58.3 billion, beating the expected $54.54 billion.

iPhone revenue came in at $28.96 billion, down 7% from the same quarter last year. Making up some of the short-fall was revenue from subscription-based services like Apple Music and iCloud. This came in at $13.34 billion, up 16% from the previous year. Apple CEO Tim Cook noted that the lockdown had seen more people watching their subscription-based streaming service. In addition, sales, wearables and accessories contributed $6.28 billion.

“Despite COVID-19’s unprecedented global impact, we’re proud to report that Apple grew for the quarter, driven by an all-time record in Services and a quarterly record for Wearables,” Cook commented.

Despite the recent market downturn, Apple appears confident in its own stock and the share price’s valuation - going so far as to announce plans to buy back $50 billion in shares.

While that's down from the $67.1 billion Apple spent last year, it underlines Apple's commitment to its shareholders. Steven Fiorillo, writing on Seeking Alpha, notes that Apple has given back $400 million to shareholders since 2012 in the form of buybacks and dividends.

Fiorillo reckons Apple could hit $400 a share by October 2021 as newly-remote based office workers buy more of its products to enhance home offices. That would be a hefty jump from the $315 level Apple’s share price has been trading around so far in 2020.

Apple is looking to the past to arrest slipping iPhone sales, launching a new range of iPhone SEs. First released in 2016, the SE is one of Apple’s cheapest iPhone models, targeting the competitive mid-range market. CEO Tim Cook has claimed a "strong customer response" to the new, affordable iPhone.

However, Apple will need to be careful not to damage the perception of its higher-end models, with the second generation of SEs having many of the same features. Something CMC Chief Market Analyst Michael Hewson notes:

“It could well alienate some of its more affluent users who have paid a lot more for some of the same features, which are now available in this smaller budget model.”

In the Q2 earnings call, Apple CEO Tim Cook declined to offer any official guidance for Q3. Cook put this down to the current unpredictability in demand caused by the coronavirus, telling CNBC:

“We have great confidence in the long-term of our business. In the short-term, it’s hard to see out the windshield to know what the next 60 days look like, and so we’re not giving guidance because of that lack of visibility and uncertainty,”

That didn’t stop CFO Luca Maestri offering some clues for this year, saying he expects iPhone and wearable sales to decline in the coming quarter. However, Maestri thinks revenue from iPad and Macs is expected to improve year-on-year for Q3 - something that plays into Fiorillo’s argument that people will spend more on their home working setup.

Analysts have pinned a $308.91 average 12-month share price target on Apple. Hitting this would see a 1.9% downside on the current share price. Of the 38 analysts tracking the stock on Yahoo Finance, 11 rate it a Strong Buy and 21 rate it a Buy. If Steven Fiorillo’s October 2021 $400 target is reached, that would be a healthy 27% gain.

Is that $400 target possible in the next couple of years? Well, with Apple’s supply-chain back online and retail stores reopening Apple seems back on track. Now investors and tech-fans alike will be watching out for any news around Apple’s 5G iPhone. Rumoured for an Autumn launch, the timing could take advantage of any rebound in consumer spending, driving revenue well into 2021. That could see Apple’s share price climb even higher.