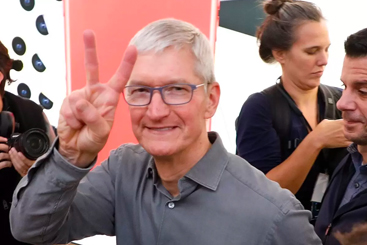 Apple’s [AAPL] share price has dropped over 8% over the past month (through 5 October) as legal wranglings and possible supply constraints weigh on the stock.

Yet, with the stock trading well below the $156.6 hit on 7 September, this could be an opportunity to buy a high-quality stock.

One thing that would help Apple’s share price is unimpeded growth in iPhone sales - in the tech giant’s latest set of quarterly results iPhone sales jumped 50% year-on-year. However, the global energy crunch is hitting the suppliers who supply the parts that go into making said handsets, with factories in China having to halt production - sometimes for several days.

While this might seem an existential problem right now, it could become a real issue if a prolonged energy crisis leads to further closures and increased supply issues. Apple’s CEO Tim Cook (pictured above) has already said that chip shortages would affect sales in the quarter ending September during a Q3 earnings call, so additional supply hiccups could exacerbate this.

As the global economy has rebounded from the pandemic, energy prices have soared. In China, where many of Apple’s suppliers are based, a combination of emission targets and reducing its coal supplies has meant the country is feeling the crisis acutely. Over two-thirds of the country is experiencing some form of power cuts, while the impact on factories has seen the likes of Goldman Sachs downgrade its growth forecasts for the country.

The fallout puts a further strain on an already stretched global supply chain. Apple semiconductor supplier Unimicron Technology announced that it had shut down three of its subsidiaries over the weekend, according to Business Insider. While another Apple supplier, ASE Technology Holding Co, said it had seen no production from a plant in Kunshan City from 27 September to 30 September.

Pegatron and Concraft Holding - both of which either assemble or supply parts for the iPhone - have also halted production or reduced energy consumption.

So far the impact has been negligible on Apple’s share price. However, longer-term there could be some impact should the energy crisis cause Apple to miss iPhone production targets. In the past couple of quarters, iPhone sales have driven headline numbers, with customers upgrading their handsets from old 4G models to the 5G enabled iPhone 12 and 13.

As it stands, Apple’s share price is trading around its July levels following the slump, which could represent a buying opportunity for a stock with a $167.92 average analyst price target. Hitting this would see a 19% upside on Tuesday’s close.

Bloomberg’s stocks to watch during the energy crunch

Looking beyond Apple and its suppliers, Bloomberg has identified potential winners and losers as the energy crunch continues.

Australia’s Woodside Petroleum was identified as one of the likely winners in the energy crisis. Since Monday 6 September, Woodside Petrolium’s share price has shot up over 26% (as of 5 October close). The stock is now nearing its average analyst price target of $26.19, while a 52-week high of $27.6 lies beyond that price point.

Along with the energy squeeze, Woodside Petroleum’s share price got a helping hand after BHP Group transferred a smaller-than-expected $3.9bn in liabilities to the Australian gas processor as part of the two companies merging their petroleum businesses.

Eve Energy’s share price [300014.SZ] has surged over 6% since 28 September. The maker of lithium batteries has a hefty CNY138.76 average analyst price target - a 40% upside on Tuesday’s close. Eve Energy, which supplies Tesla, could be at risk from power shortages that have affected other parts makers. If power rationing lasts, then material prices could increase adding to the cost pressures facing manufacturers.

Adaro soars, but coal prices could be peaking

As coal demand increases in the region - along with prices - Bloomberg identifies Indonesia’s Adaro Energy Tkk [ADRO.JK] and Australia’s Whitehaven Coal Ltd [WHC.AX] as two stocks to watch. Adaro’s share price has climbed over 20% since 27 September, although Tuesday this week the stock gave up some of those gains, dropping 1.61% in the session. Whitehaven Coal’s share price has gained over 7% in the same time frame, with a 2.37% gain on Tuesday.

Both stocks are now trading above their average analyst price targets - something to bear in mind.

China’s renewable and energy suppliers could be worth considering as they have so far proven resilient. Bloomberg points out that the state-backed Economic Daily newspaper suggested that the ultimate solution to the energy squeeze is to focus on lower energy consumption. The news outlet picks out China Longyuan Power Group Corp [0916.HK], Huaneng Lancang River Hydropower Inc. [600025.SS] and Fujian Mindong Electric Power Ltd [000993.SZ] as stocks that warrant further investigation.