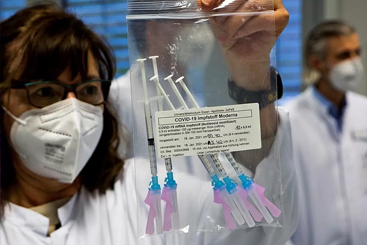 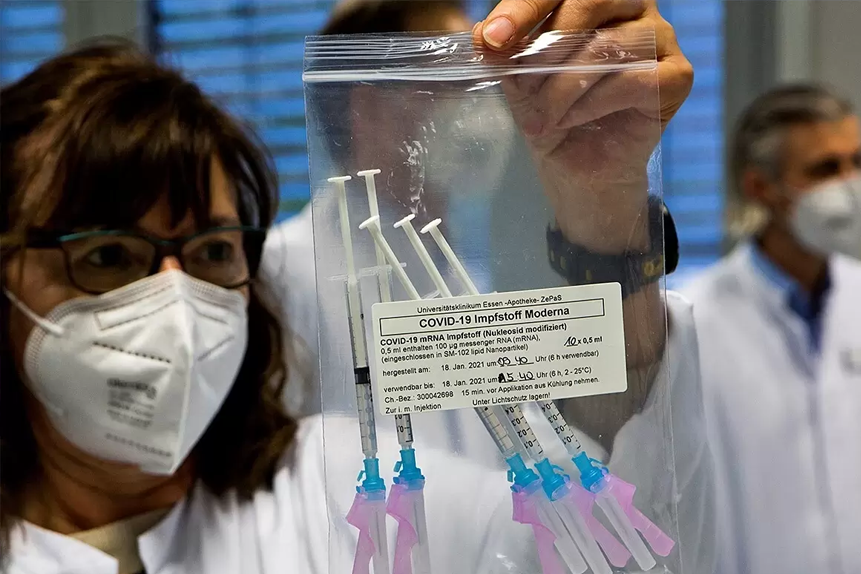 Moderna is set to announce earnings for the quarter to June 2021 before markets open on 5 August. Zacks expects Moderna to announce sales of $4.29bn, a 6,368.43% increase year-over-year, with earnings per share expected to increase 2,038.71% year on year to $6.01. CNN Money has slightly lower consensus estimates for both sales and earnings, at $4.2bn and $5.96 per share respectively.

The high sales estimates proposed by both panels are similar, with Zacks most optimistic estimate of $5.47bn, effectively equalling CNN Money's$5.5bn. The same is true of the low sales estimates, which come in at $2.87bn and $2.9bn respectively. There is a very wide range in sales estimates from both panels, indicating that Moderna’s revenue could grow anything from 4,225.55% to 8,144.16%. Both panels report the same range of estimates for earnings per share, which again sees a wide spread. The low estimate of $3.27 is less than half the high estimate of $8.12.

Assuming the Zacks consensus estimates are accurate, Moderna’s sales are set to increase 121.48% from the previous quarter, with earnings forecast to rise 111.62% on the same period.

Zacksanalysts expect Moderna’s sales to increase 2,191.26% in 2021 as a whole to $18.41bn, before falling 14.41% in 2022 to $15.76bn. This forecast fall is related to the outsize influence on this year’s performance of Moderna’s successful COVID-19 vaccine rollout, and concerns that this will not be sustained into the future. These fears are currently suppressing the Moderna share price to a mere 12x multiple of consensus earnings.

Moderna estimated in May that its vaccine would generate revenues of $19.2bn in 2021, but this estimate could grow larger with the upcoming earnings announcement. The company has increased the price of its shots recently, from $22.60 per jab to $25.50, along with rival Pfizer, which increased its price from $18.40 to $23.15. Moderna’s estimated production capacity is one billion doses in 2021, but it is looking to scale this up to around three billion in 2022, especially with its positioning as a potential provider of booster shots to counter the rise of the Delta variant. The US government recently upped its order of 300 million Moderna doses with another 200 million shots.

The success of its COVID-19 vaccine rollout drove a 200% surge in the Moderna share price to 20 July, and it debuted on the S&P 500 the following day.

Moderna’s inclusion in the S&P 500 has boosted its holdings in a number of biotech ETFs. As of 30 June, it was the third-highest holding in the iShares Biotechnology ETF [IBB] with 2,704,971 shares giving it a 5.86% weighting. As of 2 August, IBB’s 2,802,330 shares made Moderna its top holding with an 8.89% weighting. The surge in the Moderna share price, as well as that of other vaccine producers such as fifth-largest holding BioNTech, which has a 4.51% weighting as of 2 August, drove gains of 9.66% in the year and 19.86% over the trailing 12 months for IBB.

That said, these stocks have kept the biotech industry afloat over past months. Most other major ETFs in the space have fallen this year, among them the SPDR S&P Biotech ETF [XBI], which fell 18.82% in the year to date as of 30 July. Moderna is XBI’s second-largest holding as of 2 August, with 1.11% of its weighting.

While the Moderna share price has overperformed, other stocks such as diagnostic testing company Veracyte [VCYT], XBI’s seventh-largest holding, which fell 10.22% in the year to 2 August have dragged down the fund, and the broader industry.