Argaam – Is the oil rally over? 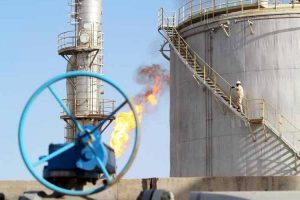 Crude oil prices continue to be roiled by the selling pressure. October was one of the worst months for oil bulls as both the benchmarks – Brent and WTI – fell almost 10 percent on a monthly basis.

So what’s the outlook of oil? A few months back, many analysts feared the risk of oil touching $100 a barrel. But now as the Brent is struggling to break above $75 a barrel, are such over-ambitious predictions near impossible now?

“Yes, I think the market has put in a major top, barring an unexpected geopolitical event in the Middle East that threatens the supply chain,” Jim Wyckoff, Senior Analyst of Canada-headquartered Kitco.com, told Argaam.

Too much oil, too few buyers

Oil works on the simple economic principle of demand-and supply, but only if other things such as geopolitical situations, remain normal.

Currently, on the supply side oil producers’ output remains elevated, and the rising US stockpiles and shale oil boom are going to keep the market flooded, at least in the near future.

And now with the US allowing eight countries to keep importing Iranian oil after the sanctions come into effect on Nov. 4, the supply fears have also subsided to some extent.

What’s worse, the demand side too doesn’t look all positive as emerging markets, especially China, are slowing. The strengthening US dollar too has weighed on oil prices.

“The US-China trade war has negatively impacted the oil market because China, the world’s second-largest economy, is being hurt by the tariffs imposed by the US. The only way oil will hit $100 is if there is a geopolitical shock in Asia or the Middle East,” Wyckoff added.

Last month, the International Energy Agency (IEA) had also cut its estimate for global oil demand growth for both 2018 and 2019 by about 110,000 barrels a day to 1.3 million and 1.4 million barrels a day respectively, due to the growing pressures to global economic growth.

Despite the sharp fall in oil prices in recent weeks, however, some analysts believe oil still has a lot more upside, as fundamentals don’t support this fall.

“International benchmark Brent crude has fell by more than 11 percent from its recent highs. However, from a price perspective this seems quite normal as oil price had rallied by more than 30 percent in 2018 alone. On the charts, this seems like a normal correction and the uptrend looks all set to continue. Oil market fundamentals are on a strong footing,” said Vijay Valecha, chief market analyst at Century Financial Brokers.

Market observers say at this stage, it’s simply difficult to know the full impact of sanctions on Iran, and of the US waivers, on whether these factors would increase the pressure on producers with spare capacity to produce more, or they would lead to a drop in spare capacity.

The latter case would be viewed as price-positive for oil as it would continue to tighten the market. The ongoing US-China trade war and the demand from Emerging Markets, especially China, are the other two crucial factors that would set the tone of oil price for the rest of the year.

“While the negative impact of rising crude oil prices has yet to affect the 2019 demand outlook, there is no doubt that it will have an impact sooner rather than later. EMs led by China and India represent close to 90 percent of global demand growth,” said Ole Hansen, Head of Commodity Strategy at Saxo Bank.

Overall, as the oil market looks ahead to the next trading week, when Iran sanctions come into effect, traders must prepare for a potentially very busy one. Crude oil prices will remain very sensitive to any new headlines related to potential trade tensions, the US dollar movement, and anything that could impact the demand-supply balance.