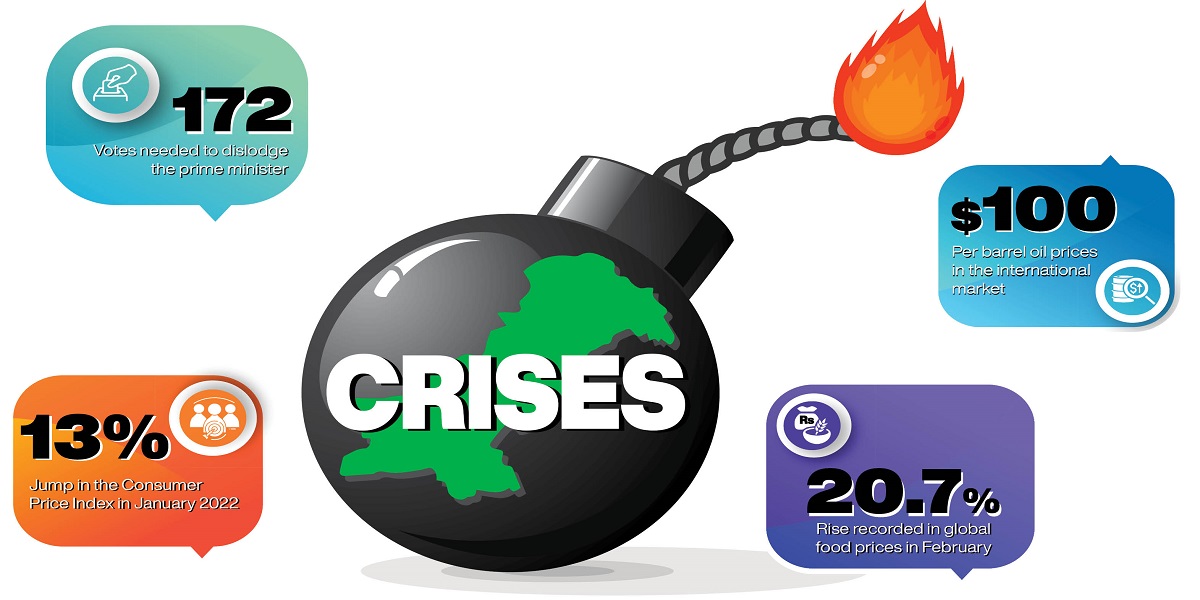 KARACHI: As the opposition parties are striving to topple the government, criticising Prime Minister Imran Khan for economic mismanagement and a flawed foreign policy, the incumbent has decided to fight back.

He has taken to public campaigning and is addressing rallies countrywide, making his point clear as to why he is being called out.

Besides many of his first-success initiatives such as combating the Covid-19 pandemic, Ehsaas Programme and managing the macroeconomic situation, the added feather of Islamophobia Day triumph at the United Nations has given him an instant agenda to go on.

After failing to dethrone the Pakistan Tehreek-e-Insaaf (PTI) government through street protests, the nine-member opposition alliance, Pakistan Democratic Movement (PDM) and the Pakistan Peoples’ Party (PPP) have moved a no-confidence motion in the National Assembly on March 8. The motion is yet to be put to vote, but the current turmoil has made it a bitter show of power politics. In the 342-member National Assembly, the opposition needs 172 members’ support to dislodge the prime minister.

The opposition parties believe that the government’s policies have led to spiral inflation and compromised on sovereignty at the hands of a pinching International Monetary Fund (IMF) programme.

The country’s inflation measured by the Consumer Price Index clocked-in at a 24-month peak of 13 per cent in January 2022, as the prices of almost all commodities and utilities exhibited an upward trend. This was the highest CPI inflation since January 2020 when it was 14.6 per cent.

At a time when Pakistan is struggling against a double-digit inflation, the UN Food and Agriculture Organisation (FAO) has warned that poorer countries in Asia, Northern Africa and the Middle East that depend heavily on wheat imports might suffer significant food insecurity because of the Russia-Ukraine war.

Ukraine and Russia, which is under heavy economic sanctions for invading its neighbour two weeks ago, account for one-third of the global grain exports.

FAO Director General Qu Dongyu said that the Russia-Ukraine conflict’s intensity and uncertain duration may disrupt the agricultural activities of these two major exporters of staple commodities and could seriously escalate food insecurity globally when the international food and input prices are already high and vulnerable.

The UN agency also noted that Russia is the lead producer of fertiliser and a key fertiliser component — urea — price has jumped more than threefold in the last 12 months.

“Supply chain and logistical disruptions on Ukrainian and Russian grain and oilseed production and restrictions on Russia’s exports will have significant food security repercussions,” Qu said in a statement.

The FAO said that the global food prices reached a new high in February, rising 20.7 per cent year-on-year, owing to an increase in the prices of vegetable oils and dairy products.

Pakistan is planning to purchase two million tonnes of wheat from Russia to build the country’s strategic reserves, amid a rise in the local demand.

For Pakistan, which is heavily reliant on imported oil, pulses, edible oil and sugar, the impact of the rising global commodities prices on its economy would be devastating. In such a scenario, this political arm-twisting is quite unnerving and would impact the economy adversely.

Devesh Mamtani, chief market strategist at Century Financial, told BOL News that the resurgence in domestic demand has spurred a considerable jump in imports and with the commodity prices on the rise, those imports have proven painfully expensive.

“Indeed, with oil prices currently hovering just below $100/barrel, Pakistanis are now facing some of the country’s highest-ever fuel prices. Millions of Pakistanis are suffering financial hardships, as the prices of energy, daily commodities and medicines soar across the country that could likely affect the political leadership in the country,” Mamtani said.

An economic meltdown is putting the political leadership under immense pressure and bringing the threat of unrest because of the record inflation — the fourth highest in the world.

“However, it is essential to know that the world economies are facing record inflation on account of supply chain disruptions, commodity shortages due to the ongoing war and other macro conditions that are resulting in surging inflation in Pakistan too,” he said.

Earlier when Pakistan was granted the IMF bailout, Islamabad had slashed food and energy subsidies, attempted to increase the tax collection and devalued the rupee to meet the IMF provisions.

However, to curb the surging inflation, the government reduced fuel prices by Rs10/litre and electricity tariff by Rs5/unit to freeze the new rates, amid surging fuel prices for four months with the price differential being covered by the government.

Analysts believe that the move is designed to claw back some political space in the face of mounting threats from the opposition and messages coming to the prime minister from his own party about the devastating impact that inflation has had on their electoral prospects.

They say this measure is expected to give some temporary relief to the already hard-hit government.

The opposition parties accuse the PTI government of deliberately destroying the economy through such measures.

The Pakistan Muslim League-Nawaz (PML-N) warned that the new government would be unable to face the economic crisis created by the PTI government.

Former finance minister Miftah Ismail said that the PTI government had started “laying mines”, which would explode only after a few months when it would not be in power.

“They are making moves one after another because they want to create problems for the next government. Because they are so sure that they have to be out once the no-confidence resolution is tabled and they would not be elected by the people of Pakistan after their worst governance, they are playing all those tricks to create challenges for the new government. They are laying landmines and it would be one of the toughest tasks to fix the economy,” Ismail said at a press briefing.

While the opposition is criticising the prime minister’s efforts to curtail inflation by reducing the oil and electricity prices, many businessmen have hailed the decision.

Awais Saeed Piracha, CEO of Trinity Enterprises, said that the prime minister’s initiative to reduce the oil and electricity prices would lessen the cost of everything that is directly relevant to the consumable items.

“In Pakistan, it is quite difficult for the government to control inflation. In a country where the production level is inefficient, supplies are short, the consumption level is high, where investment is mostly done on the properties and fixed assets, such problems are quite common,” he said.

“The government doesn’t have many options to control these gaps. However, I’m quite hopeful that it will continue to take actions for the betterment of the people,” he added.

To curb the rising prices of a few commodities that would increase the demand during the holy month of Ramazan, Pakistan’s top economic decision-making body has approved Rs8 billion ‘Ramazan Relief Package’ for the people facing high inflation rates.

Under the package, at least 19 essential items will be made available at subsidised rates to the people at 6,000 Utility Stores Corporation (USC) outlets across the country. The commodities include rice, flour, pulses, sugar, edible oil, dates, tea and milk among other essential items. This relief package should likely to help in taming the record prices and allow the people to celebrate their festivities.

But the embattled prime minister is focused to go on. His latest achievement was at the UN General Assembly. The prime minister congratulated the Muslim Ummah after the United Nations (UN) adopted a landmark resolution, designating March 15 as the International Day to Combat Islamophobia.

Pakistan introduced the resolution on behalf of the Organisation of Islamic Cooperation (OIC). It marks the day when a gunman entered two mosques in Christchurch, New Zealand, killing 51 people and injuring 40 others on March 15, 2019.

Taking to social media, the prime minister wrote that the UN has finally recognised the grave Islamophobia challenge being confronted by the world.

“Today, the UN has finally recognised the grave challenge confronting the world: of Islamophobia, respect for religious symbols and practices and of curtailing systematic hate speech and discrimination against Muslims,” the prie minister said in a series of tweets.

All said and done, the political twists and turns will go on to rewrite the new rules of engagement and it is very likely that instability will undermine the economic turf in weeks and months to come.

Will PM Khan be able to court himself out of the mess? Not a simple answer is in the wings.