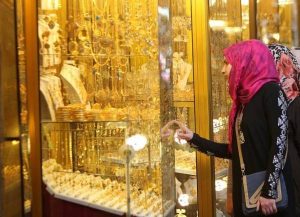 As the US dollar continues to hold strong in international markets, gold prices fall as investors search out safe bets elsewhere. As the week started, UAE 24-karat gold fell from Dh147.25 per gram to Dh146.75 per gram as Monday played out. You can check the live rates on business24-7.ae

Vijay Valecha of Century Financial has been watching the situation carefully. “Gold prices weakened for the start of this week as rising interest rates and a strong bull market in global equities signals that there are better avenues for investment,” he said. In the UAE, Valecha expects the price of 24K to move between Dh145 and Dh149 per gram.

When asked to speculate on the reasons behind these circumstances, Valecha pointed to a bull equities market and rising interest rates among the forces pushing investors to other assets.

Valecha also reminded investors to bare in mind that August and September, as well as the other remaining months of the year, are traditionally strong months for gold and other precious metals, highlighting an historical rise of 4.1% on average.