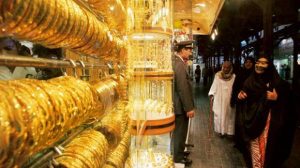 Despite anticipated high demand for gold before Diwali, prices edge down on Monday, offering a relief for buyers

The anticipated buying rush before Diwali hasn’t done much to prop up gold prices in the UAE.

After rising in the last few days, jewellery rates in the country inched down on Monday, offering a slight relief for last-minute holiday buyers.

Industry sources, however, said there is still a “good demand” for gold jewellery in the UAE and that the latest decline is only temporary.

“Weekend sales were better than expected and we think there will be more buying closer to Dhanteras, the first day of Diwali, when people think it’s auspicious to buy and gift gold jewellery,” said Karim Merchant, CEO and managing director of Pure Gold Group.

“So far, the buying activity is good. The price movement depends on many economic factors, not just the physical demand for gold.”

The precious metal had gone up to its highest level in more than three months last week due to high safe-haven demand from investors amid a slide in global equities. On Tuesday, global gold prices hit $1,239.68 an ounce.

“Gold is pausing for a breath and is probably consolidating for the next possible move higher. Some speculative investors would be in a position to take profit,” Mitsubishi analyst Jonathan Butler was quoted by Reuters as saying.

Analysts had earlier forecast that gold would continue to shine until the first week of November, especially since Indians celebrate the festival of lights. Buying gold during the special occasion, which is expected to fall on November 7, is deemed auspicious in the Hindu religion.

According to the latest Kitco gold survey, the majority of polled professionals on Wall Street (67 per cent) also predicted gold to maintain its upward momentum this week. Only a small number (28 per cent) were betting on the bullion to lose its shine.

A major factor that could boost the precious metal prices, however, would be the escalation of the trade war between the United States and China. “Heightened risk aversion” could also prompt investors to shy away from the US dollar.

“The Trump administration may respond to a sustained drop in the Chinese yuan by launching the fourth round of US tariffs on China,” noted Century Financial’s weekly market report.

Vijay Valecha of Century Financial said the latest decline might not be sustainable. “The current easing in gold prices might be a temporary dip, as fundamentals are still positive for the yellow metal,” Valecha said.

“A further escalation of the trade war will likely be a risk-off event, leading to a rally in the safe assets like gold. Also, President Trump has launched a verbal assault on the Fed recently, upping the ante against the Fed’s rate hike plans and this may cause the greenback to take a beating. History shows gold tends to benefit the most from currency wars,” Valecha added.