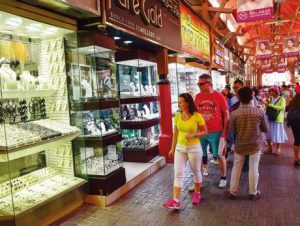 The price of gold has hit its lowest level this year and may have bottomed out, according to the latest analysis.

As of 5pm on Sunday, 24-karat gold was trading at Dh147 per gram, down by 75 fils since the beginning of the month and cheaper by a whopping Dh12 from around January this year.

“Gold has slashed its shine and has come to the lowest point of the year. Gold prices have not dropped [further] over the weekend and seem to have bottomed out,” said Vijay Valecha of Century Financial.

“This might be a good time to be buying gold.”

The precious metal has been losing its shine due to the strengthening of the US dollar, but experts said the trend may not continue, especially since demand for gold tends to go up during the months of August and September.

“Even though global markets have been affected by a range of uncertainties in [the first half of 2018], gold has declined. In our view, this was heavily influenced by a stronger US [dollar],” according to a research note by Bank of America Merrill Lynch.

“Uncertainty over Italy may have pushed peripheral spreads higher, which is normally bullish for the yellow metal, but falling rates in core Europe meant that [the] euro declined.”

The bank said that it is likely for the precious metal to see some upside, but any price gains would be dependent on the performance of the US dollar, among other factors.

“We see some upside to gold, but expect price gains to materialize only if [the US dollar] weakens, [the] global / US growth starts to slow and cross asset volatility remains elevated,” the bank added.