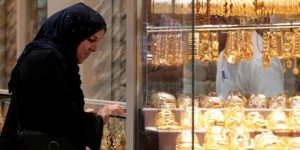 Gold jewellery prices in Dubai had a weak start to the weak, as bullion prices fell on rising interest rates and firm US dollar, and investors looked to other assets for better returns.

“Gold prices weakened for the start of this week as rising interest rates and a strong bull market in global equities signals that there are better avenues for investment,” Vijay Valecha of Century Financial told Gulf News.

“Gold seems to be losing its shine as rising interest rates and a strong bull market in global equities signals that there are better avenues for investment,” added Valecha.

Gold prices had strengthened during Friday’s last session after sinking to a 17-month low of $1,204 an ounce, as non-farm employment data in the United States came in softer than expected and the greenback weakened.

August and September are known to be positive months for gold, with historical analysis showing that prices of the precious metal during these months go up by an average of 4.1 per cent.

Just last week, demand for gold in India, one of the world’s biggest consumers of the precious metal, had already shown some uptick.

“Gold has entered into seasonally best two months of the year. Historical analysis reveals that during these months, gold prices have gained an average of about 4.1 per cent, with a probability of nearly 70 per cent,” said Valecha.