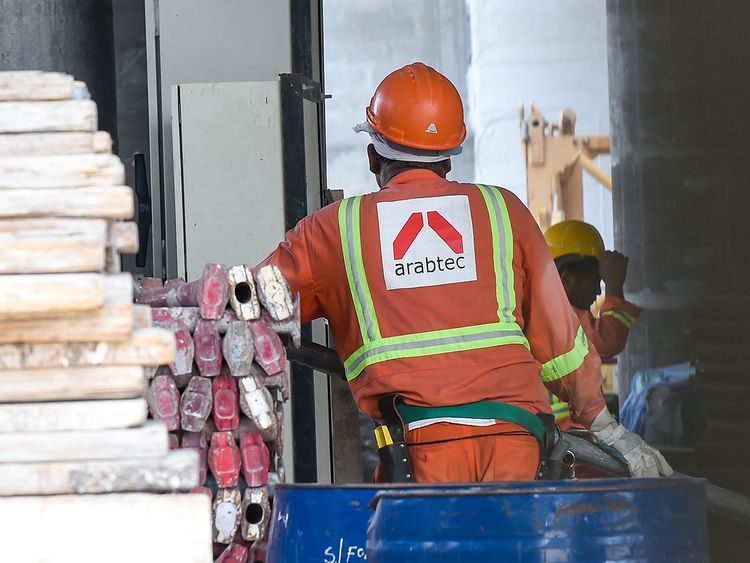 Dubai: Pressure on the UAE’s construction sector is increasing by the day, with banks now tightening up project-related financing over the last two months. With Arabtec - the country’s largest contractor and a bellwether for the wider economy - heading into liquidation, cash availability is emerging as the single biggest threat to the industry, multiple source say.

“This reluctance by banks to lend for project finance has become obvious in the last two months – even on projects from reputed organisations with good track-records,” said the general manager at a leading firm with a portfolio of projects in residential and oil and gas sector. "We just get calls from the concerned division saying they are not in a position to fund the project presently, without offering any reasons."

Typically, banks put up the required financing instruments to match the funds advanced by the project promoter as well as to guarantee performance of the contractor. In addition, banks also offer financing facilities such as monthly 'progress invoice discounting' and letter of credit limits for procurement.

“Such lending is vital to get projects off the ground – in their absence, it’s unlikely they will launch on time and created further uncertainties,” the source added. “This is the biggest risk the local construction now faces.”

The “tragedy” as far as contractors are concerned is that banks had loosened their funding taps when the COVID-19 pandemic struck and the government released stimulus measures to ensure cash got through to key sectors and businesses.

Questions about Arabtec’s viability had been circulating for some time, and it could be that banks want more time to gauge how any liquidation might affect the wider construction sector in the UAE. Arabtec, which held a board of directors’ meeting on September 29, has not formally made any statement to Dubai Financial Market on liquidation. The statement issued early this week only said that the board would review the “analysis prepared by the financial advisors”.

According to a construction industry source, “An Arabtec liquidation will be detrimental not just to its workforce or shareholders – all the subcontractor businesses associated with it will be dragged under.”

Until the last minute, many had been hopeful that Arabtec – or some of its shareholders – would come up with the funds to see it through the next few months. In fact, a statement the company issued recently talked up that possibility – “A stakeholder had previously committed to make available adequate financial support to ensure business continuity of the Group as a going concern for a period of 12 months from the signing of the consolidated financial statement for the year ended December 2019 until 11 June 2021.”

Obviously, if the liquidation takes effect, those funds have failed to materialize. The accumulated losses sustained by the company were above the 50 per cent of its share capital as of June 30, 2020. Combined losses are at Dh1.46 billion, while its share in the year-to-date have fallen by nearly 60 per cent. Around 15 per cent of the total shares are held by retail investors, according to Century Financial, while Aabar Investments is the single largest shareholder.

What does ‘liquidation’ have in store?

“Once a liquidator has been assigned [by the company] via a decision, registration of that decision is compulsory at the Registrar of Companies to be valid,” said Abdulla Alawadi, Chairman of the law firm Abdulla Alawadi & Associates. “Subsequently, the manager of the company will cease acting, step out of the picture and the liquidator will be entitled to maintain, administer, collect, evaluate the assets of the company and claim any rights due.

“In the current scenario, [Arabtec] subcontractors have to have a good eye on local gazettes to know the liquidator named for the process. Afterwards, they will have to submit hard/soft copies of their debt bonds and any supporting documentation to the liquidator. [Then they] wait for the liquidator's report to be submitted before the competent judge for approval and the liquidation of assets.”

Industry sources say that what makes Arabtec so vital to the economy is its status as the go-to contractor for infrastructure projects as well as high-profile work in the residential and commercial spaces. Not just that, it has a presence in the oil and gas contracting space as well.

Arabtec operates multiple subsidiaries “that could be by themselves be bigger than some of the individual contracting firms,” said a source. “It will be interesting to see whether the company will continue to execute its existing projects or these will be parceled out. There could be opportunities for specialist contractors to come on board.”

In the recent past, its subsidiary, Target Engineering, had won a Dh40.76 million contract from ADNOC Offshore and another 200 million riyal project from Saudi Aramco. “Core projects are unlikely to be impacted as they are handled by dedicated subsidiaries,” said Vijay Valecha, Chief Investment Officer at Century Financial.

“Liquidation is a technical proceeding – day-to-day functioning is unlikely to be impacted. A case in point is what’s happened at NMC Healthcare, which continues to function well in spite of all the brouhaha around it.”

But for the UAE construction sector and its players, this will be of scant relief. If banks double their scrutiny of projects and their financing, it will mean more time taken for clearances and the funds to flow through.

“Even with the pandemic, the new project flow in the UAE was still strong, especially in the energy related and infrastructure side,” said a source. “Banks cannot use the Arabtec excuse to slow down their funding support for the industry. An entire industry cannot be made to suffer.”