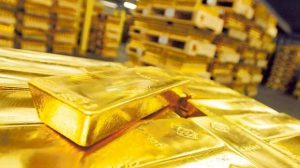 Gold fans in UAE are likely to save money on jewellery purchases if they hit the shops today, as the precious metal continues to lose its shine.

Since its peak in April, gold has lost a whopping Dh17 per gram in value, historical price data showed. That’s a saving of nearly Dh130 on a necklace that weighs 7.5 grams.

The yellow metal’s weakness is thanks to an upbeat US dollar, strong economic data coming out from the United States and expectations of higher interest rates. Investors tend to move away from safe-haven assets such as the precious metal when the economy looks good.

The price of 24-karat gold in Dubai dropped from Dh145.25 per gram to Dh144.75 per gram on Tuesday alone. Today’s gold price is one of the lowest this year and buyers looking to get new pieces can expect to spend Dh17.25 less per gram compared to a few months ago. Last April 3, the price of 24K gold reached Dh162 per gram.

“A good economy is something that gold never likes and this is exactly what is happening now,” Vijay Valecha of Century Financial said.

Data released on Friday showed that the United States has created 201,000 new jobs, exceeding the target of 191,000 jobs, while workers’ wages have also gone up.

“The US dollar has got a fresh leg up after last Friday’s upbeat US non-farm payrolls report where the data of 201,000 new jobs beat expectations of 191,000 and wages grew by 2.9 per cent against a consensus forecast of 2.7 per cent,” added Valecha.

The US treasury yields have also increased to 2.95 per cent and looks on track to hit the 3.12 per cent mark.

“The [gold prices in UAE] have come down in reaction to these news. But gold has good support around Dh142.80 level that corresponds approximately to $1,180 an ounce in the international market. Support is provided by the everlasting Iran nuclear issue and US President Trump’s trade tantrums.”