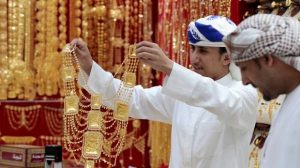 Savings of nearly Dh5 per gram await buyers, but analysts caution that another spike could happen soon

Planning to buy new gold jewellery pieces this week? Fans of the yellow metal in the UAE could score some bargains today, with retail rates dropping during the first trading day of the week.

The price of 24-karat (24K) was retailing at Dh147.75 per gram as of 10am on Monday, down by Dh1 per gram from Thursday and nearly Dh5 per gram cheaper compared to its peak in early July.

UAE jewellers were selling 24K for as much as Dh152.50 per gram last July 9, so buyers who have opted to delay their purchases are more likely to save a few dirhams if they hit the shops soon. Analysts have warned that prices are set to increase again, particularly in August and September.

According to Century Financial latest analysis, the next few days are likely to be a “key catalyst for gold,” as new meetings by the US Federal Reserve and the Bank of Japan are scheduled to take place and the non-farm payroll data in the US set to be released at the end of the week.

A strong US dollar has been cited as the key factor behind gold’s weakness. Monetary policy meetings, as well as economic data from the US, play their part as well. The American currency was trading at its highest level against the Chinese yuan in more than a year on Monday.

“The dollar-CNH (Chinese yuan) is putting pressure on gold. We’ve got a lot of central bank meetings this week but I think the big one for us is probably the Federal Open market Committee (FOMC). The Bank of Japan is probably going to move the dollar/yen a bit tomorrow,” a Hong Kong-based trader told Reuters.

“On weekly chart, gold looks to be forming a triangle pattern and till $1,195 [an ounce] is held, prices are set for a meaningful rally,” a research note from Century Financial stated.

“Historically, August and September have been positive for gold prices and the probability of delivering a positive return is 70 per cent.”