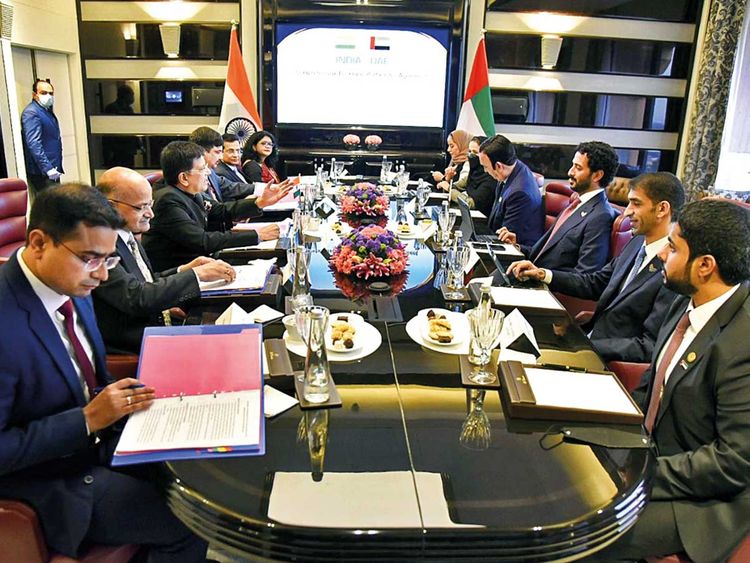 Dubai: The UAE’s CEPA (Comprehensive Economic Partnership Agreement) with India has gone live, with the first shipments under the new zero or reduced import duty from India set to arrive in the UAE after the Eid holidays. This sets the stage for UAE-India trade volumes to head for the $100 billion mark in the next five years.

For imports to UAE, on Day 1 itself 172 items from India will have complete import duty waiver and the aim is to add 11 more items to the zero rate by the fifth year (2027).

According to UAE and Indian business chiefs, the CEPA alliance, which was signed in February, also creates opportunities for the widening of investment flows across sectors – and not just those dominated by existing trade ties.

The framework of the deal will also be pursued by the UAE in similar trade agreements with Israel and Turkey. The CEPA with Israel is reportedly in its advanced stages, while that with Turkey has just been initiated. For India too, there will be upcoming trade alliances, with that with the UK to be enacted within months.

With the CEPA going live, the investment flow between UAE and India is also geared to go up a few notches. A new council to oversee investment matters will also be formed as part of the Agreement.

Scaling back on duties

“It is estimated that around 90 per cent of the products exported and 80 per cent of lines of trade from India to the UAE will attract zero duty, significantly benefitting Indian exports,” said Raju Menon, Chairman of Kreston Menon, the audit firm. “The zero-duty access for Indian products to the UAE is expected to expand over a period of five to 10 years to 97 per cent of UAE’s tariff lines. In other words, 99 per cent of Indian exports by value.”

According to available info:

123 items have been earmarked for immediate tariff elimination for imports from UAE to India, while 33 more items will have zero rate by the fifth year (2027) and four more in the seventh year (2029).

There will also be a tariff reduction for 35 items (30 per cent to 15 per cent in the fifth year) imported to India.

"The countries have agreed to set up a technical council on Investment, Trade Promotion and Facilitation, which will work towards the removal of obstacles that hinders trade and investments," Menon added. "The proposed council will also hold interactions with the private sector in the UAE and India to promote bilateral trade and large-scale investments."

Bal Krishen Rathore, CEO of Century Financial, says the launch of a technical council to address investment-related matters will be a decisive breakthrough in itself. “CEPA is likely to boost investments since an official body is now set up to address any impediments,” he said. “According to the agreement, The objectives of the council are to promote and enhance investment and trade cooperation and facilitation between the parties; monitor investment and trade relations, identify opportunities for expanding investment and trade, and to identify issues relevant to investment and trade that may be appropriate for further discussion.”

The UAE will be represented by the Under-Secretary at the Ministry of Finance, or an authorized representative, while India will have a Joint Secretary (or equivalent) from the Department for Promotion of Industry and Internal Trade.

“Creating a body with high-level representatives will give it sufficient teeth to address any potential issues,” said Rathore. “The UAE is India's third-largest trading partner, so investments should follow trade, and the overall numbers should go up substantially in the coming years.

On April 21, the UAE Ministry of Economy said a new webpage was uploaded to provide all relevant info on the CEPA with India. Companies based in the UAE – and ‘investors who wish to capitalise on the benefits’ – can use it as single-source window to take their next steps.

“This comprehensive knowledge base enhances the access of exporters, suppliers, investors, entrepreneurs, innovators, and talents to new opportunities under the scope of this Agreement, thereby strengthening their ability to develop specific expansion strategies focused on the Indian market,” said Juma Al Kait, Assistant Under-Secretary of International Trade Affairs at the Ministry.

In all, there are 18 chapters under the CEPA and lists the processes companies in the UAE can ‘adopt to expand their business relationship with the Indian market’.