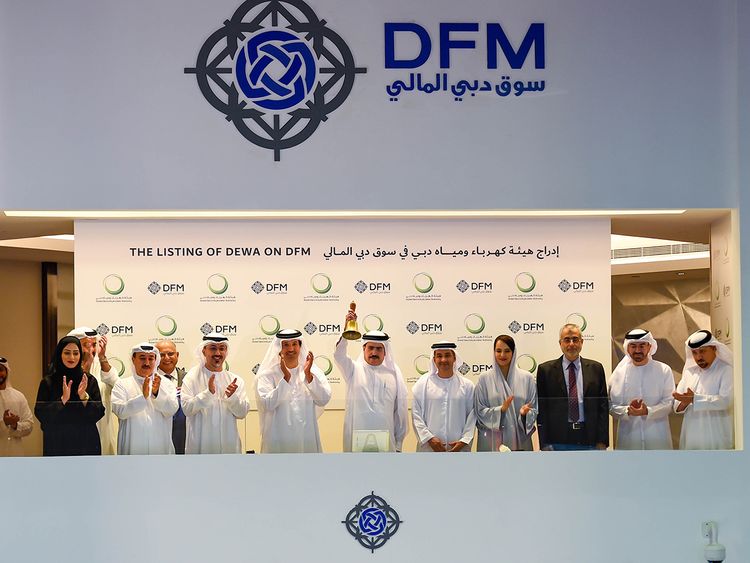 At the end of the first 30 minutes of trading, DEWA was up 16 per cent, even as UAE stocks mirrored the volatility seen in other Asian markets.

The stage is set for Dubai Financial Market to make its journey to a Dh3 trillion market capitalisation, with DEWA set to list after a hugely successful IPO. DEWA, whose retail offering was over-subscribed 37x, has listed its prospectus on DFM ahead of the start of trading.

“The strong interest we have seen from institutional and retail investors reflects the confidence in DEWA as a globally leading utility company,” said Al Tayer. “We are proud to be able to offer investors the opportunity to be a part of DEWA’s future as it supports Dubai’s growth and energy transition.”

Market analysts and investors are only focussed on one detail – how will the DEWA stock fare on the first day of trade? Or to be more pertinent, how high will it go. A 15-20 per cent spike is rated a certainty by most market watchers, while for DFM, the listing represents a truly historic moment.

The share will list at Dh2.48. “With first day listings, there is no ‘circuit-breaker’ that comes into effect when a stock climbs 15 per cent in a session,” said Vijay Valecha, Chief Investment Officer at Century Financial.

How did recent UAE listings fare?

• ADNOC Drilling shares jumped more than 30 per cent on debut in September 2021 after a $1.1 billion (IPO, the largest ever on the Abu Dhabi stock market. The listing drew orders worth $34 billion.

• Another record-setting IPO was from Multiply Group, a subsidiary of International Holding Company (IHC). Its shares reached Dh2 per share at the end of their first day of trading on December 5, 2021, 80.2 per cent higher than their pre-listing prospectus valuation.

• The AD Ports Group stock surged 15 per cent in debut after raising $1.1 billion.

• Fertiglobe, a joint venture between ADNOC and chemicals producer OCI, rose 21 per cent above its listing price on market debut. The venture’s shares traded at about Dh3.09 shortly after the market opened, compared with the Dh2.55 offer price.

The DEWA gains early on Tuesday (April 12) have come despite most Asian markets (except for Hong Kong and Shanghai) being in the red at 10.15am UAE time. Even on DFM, 16 stocks were showing declines, while at ADX, blue-chip stocks such as ADNOC Drilling and FAB showed dips.

The IPO's attractiveness is unparalleled on the DFM at the moment given its scale, the sector's current cycle, and, most importantly, the opportunity it may present as a potential high-dividend yield stock, effectively similar to a fixed-income play," said Kassabieh.

"The IPO ties to DFM's growth story, bringing in a new layer of sophistication and a new sector to the exchange. This is ideal for diversification of 'investment products'. And finally, the issuance boasts the government's confidence in its state-owned companies and their readiness to share their respective success journeys with the investing public."

DFM in the spotlight

The DEWA listing is only the first marker in Dubai's strategy to turn the DFM into a Dh3 trillion market cap entity. Adding depth through the listing of up to 10 government-owned enterprises is in the works, including upcoming ones from Tecom, Salik and Empower (in which DEWA holds a significant stake).

DFM's trading volumes during the first quarter of this year were Dh21.20 billion compared to Dh14.17 billion same period last year. The second quarter is likely to be one of the best in terms of trading volume for DFM, with DEWA asserting its influence. (Incidentally, the DFM operator's share price has gained 175 per cent since the beginning of last November, when news of the listing of Dubai's state-owned companies came to light.)

DEWA, the biggest stock on DFM by some distance with a launch market cap of Dh124 billion, also has opened up a new sub-index on the local stock market. While Abu Dhabi’s ADX has seen multiple utility and industrial entities listed in the recent past – ADNOC Drilling, Fertiglobe, TAQA, etc. – for DFM, this is the first one.