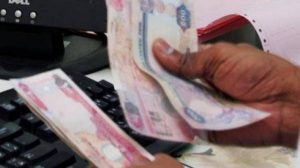 Dubai: Some UAE consumers with outstanding loans tied to prime lending rates, including those with credit card balances and mortgages, could see their monthly installments rise with the latest round of increase to key interest rates, experts have said.

Those who have stashed some cash in the bank, however, might be able to enjoy higher interest rates, although interest rates on savings deposits are still at rock-bottom levels and don’t always budge whenever new rate adjustments take effect.

The UAE Central Bank has announced that starting Thursday, June 14, it is tacking on a 25-basis-point increase in its benchmark interest rates, following a similar hike implemented by the US Federal Reserve.

The move was expected since the UAE’s currency is pegged to the American dollar. It’s the second increase implemented this year and the Federal Reserve has said it is likely that two more adjustments would follow before the end of 2018.

“[With the increase,] there is a possibility that consumers would have to pay more on loans,” said Promoth Manghat, CEO of UAE Exchange Group.

“Since the banks will now have to shell out additional sums in terms of higher interest rates, there is a high possibility that the interest on loans such as personal, housing, auto, will rise as banks will try to counter the downward pressure on net interest margins,” M.R. Raghu, executive vice president for Kuwait Financial Centre “Markaz,” told Gulf News.

Personal loans, car loans and credit debts are a part of life for many people in the UAE. The average person in the country owes more than Dh42,000, according to estimates.

But consumers shouldn’t get too wrapped up in the idea that everything will become expensive with the new rate hike. According to analysts, the increase is an indication that the economy is on a positive path and is set to reap more benefits.

Vijay Valecha of Century Financial, said that with interest rates strengthening across the UAE, consumers will be encouraged to keep their money in the bank.

“More residents will be inclined to deposit funds into UAE banks, to take advantage of the rising rates as the real rate of returns when compared to inflation will be much better,” he pointed out.

“UAE Banks are expected to benefit from the rise in liquidity, since there will be more funds available at their disposal for lending and this is likely to lead to an expansion of net interest margins.”

“Overall lending to corporations and individuals should continue to grow due to a surge in UAE gross domestic product growth anticipated in 2018 and 2019 on the back of Expo 2020 related projects and Abu Dhabi stimulus plan.”

According to a recent analysis, there has been a decline in deposits and loans in UAE this year. Gross credit dropped by 0.1 per cent in April this year compared to the previous month, while deposits fell by 0.1 per cent during the same period.