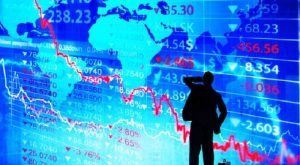 Shares on Wall Street fell for a third straight session overnight and Asian markets tracked the drop in U.S. shares early on Thursday.

“The equity market has been holding up relatively well, but it will have to decline some more if U.S. shares deepen their losses,” Yutaka Miura, senior technical analyst at Mizuho Securities in Tokyo told Reuters.

In the Middle East, most stock markets fell or ended the day close to the previous session’s levels, amid profit-taking.

Vijay Valecha, Chief Market Analyst at Century Financial Brokers said: “Investors have been buying Saudi equities ahead of a potential MSCI upgrade and Saudi Aramco’s initial public offering. Investors are seen buying aggressively select outperformers and also the expectations for inflows of foreign funds in coming months boosted the index to a multi-year high. If this is done, it could attract new big money from foreign funds to the market in the next coming months.”

Valecha said: “The Dubai index recovered from an intra-day low to close almost flat as mild buying sentiment emerged from traders who sold at higher levels.”

In currencies, the dollar retreated on Thursday on concerns over a global trade war.

The dollar index, which measures the greenback against a basket of six major peers, held steady at 89.670. The dollar index has shed roughly 0.5 percent so far this week.

Gold, seen as a safe haven, edged up early on Thursday.

Valecha said on gold prices: “Gold prices inched up on Wednesday, and hit a one week high of $1330 as investors were cautious after the sudden firing of U.S. Secretary of State Rex Tillerson. The markets were edgy after U.S. President Trump fired Secretary of State Tillerson on Tuesday. Tillerson, considered more moderate in his administration, will be replaced by CIA Director Mike Pompeo.”