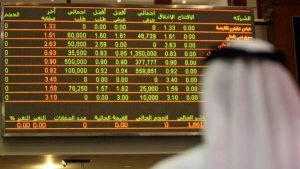 The UAE equity markets jumped on Tuesday on the back of huge gains made by Abu Dhabi banks following confirmation of merger talks of three lenders.

Overall, the Abu Dhabi Securities Exchanged gained 0.94 per cent to 4,984 points while the Dubai Financial Market (DFM) surged 0.27 per cent to 2,837 on a busy day. The UAE stock exchanges gained Dh7.5 billion in market cap on Tuesday.

UNB and ADCB counters witnessed strong activity as both the lenders’ scrips surged 14.77 per cent and 12.8 per cent, respectively – the biggest gainers of the day. ADCB and UNB closed high at Dh8 and Dh4.34, respectively, following robust demand by investment agencies and individual investors.

The merger news drove other equities high as well. Etisalat jumped to Dh16.76 while Taqa gained 6.3 per cent to Dh1.18. At DFM, Emirates NBD climbed to Dh9.30 followed by Dubai Islamic Bank to Dh5.15, with Emaar leading the growth in the real estate sector at Dh5.40.

Mahitab Ashmawi, VP, asset management, Al Masah Capital, said the local banking sector is currently trading at very attractive levels and any positive news will be reflected on the sector.

“The merger is expected to have significant cost synergies, providing a stronger new entity that is expected to come in the fifth place among its GCC peers with assets standing at almost $110 billion,” Ashmawi added.

Vijay Valecha, chief market analyst, Century Financial Brokers, said as a result of the merger, the banks would reduce the number of jobs. “A lot of duplication as well as flab will be eliminated and this will lead to less jobs.

However, considering this fact, there are approximately 50 banks in UAE serving a population of nine million. By all yardsticks, the UAE is heavily overbanked and it is in the interest of the economy to merge these entities so that the overall cost is reduced,” Valecha added.