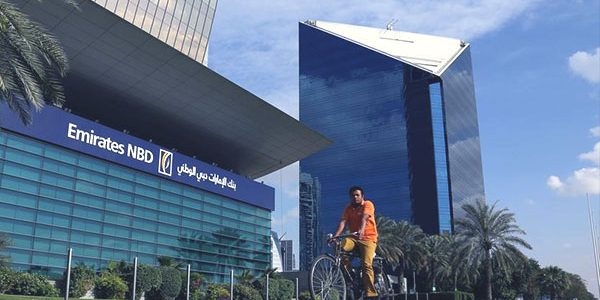 The Dubai Financial Market (DFM) made a huge jump on Monday after Emirates NBD announced an increase in the foreign ownership limit.

Analysts expect that this momentum will continue in the coming sessions and the market will see an upward trend as the investor mood is quite positive as major local companies increase their foreign ownership limit to embrace more foreign capital.

Dubai’s largest lender, Emirates NBD’s, shares jumped 14.9 per cent to Dh13.15, its highest level since October 2017. As a result of gains by Emirates NBD and Dubai Islamic Bank, the Banking Sub-Index was the biggest gainer, rising 8.15 per cent, while the Real Estate Sub-index rose 2.17 per cent and the Consumer Staples Sub-index also gained 3.11 per cent. While the Finance and Investment Sub-Index grew 2.85 per cent, all the major blue-chip companies gained with Emaar Properties vaulting 3.4 per cent, Shuaa Capital up three per cent, du rising 6.5 per cent and Dubai Investments jumping 2.27 per cent.

As a result of Emirates NBD’s decision, Akber Naqvi, founder and CEO of Zasar Holdings, expects equity markets in the UAE will witness increased liquidity.

“To keep up with the capital flow into Saudi market due to MSCI inclusion, the big regional companies such as Emirates NBD have to change their ownership limits. Otherwise they risk losing out on firepower that can be accumulated for growth/expansion and/or mergers and acquisition opportunities,” Naqvi said.

The Dubai bourse has been one of the top gainers in the region, rising nine per cent year-to-date while Abu Dhabi Securities Exchange is up 5.1 per cent. On Monday, Abu Dhabi bourse gained 0.7 per cent to close 5,156.

Vijay Valecha, chief investment officer at Century Financial, said ENBD’s decision cheered the investors of the region as it implies the willingness of regulators and policy makers to embrace more foreign capital.

“The move will support Emirates NBD plans to raise capital of $2 billion to fund the acquisition of Turkey’s Denizbank for $2.65 billion. DFM Index rallied by 4.8 per cent while Emirates NBD blasted higher by 14.85 per cent. The next major resistance of DFM index is at 2,926 and it looks like it will be taken out in no time,” he said.

“In fact we think this can trigger a rally in all UAE stocks, especially banks, where foreign ownership has been a constraint. This shall also result in higher overall volumes and the market can be a strong performer for the rest of the year,” he said.