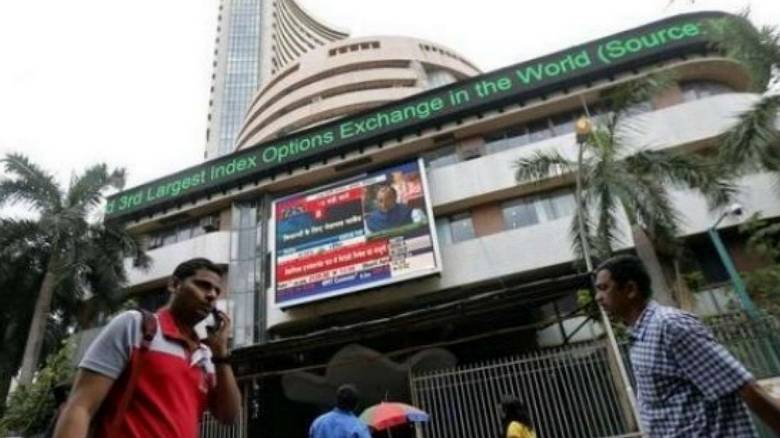 Except for Nifty pharma which slipped marginally, all sectoral indices at the National Stock Exchange were in the green with Nifty metal gaining by 2.9 per cent, private bank by 1 per cent and financial service by 0.9 per cent.

However, Titan lost by 3.9 per cent a day after the jewellery-to-eyewear maker reported a net standalone loss of Rs 270 crore for the quarter ended June. It had reported a profit of Rs 371 crore in the year-ago period.

The others which lost were Dr Reddy's, Cipla, Sun Pharma, UPL, Bharti Airtel and Tata Motors. Following the positive global cues Indian market was trading higher. Nifty50 and BSE Sensex both were up by 0.80 per cent, in early trading.

"In Nifty50 gain was led by JSW Steel which was up by 3.50 per cent, Hindalco up by 3 per cent and Axis Bank by 2.35 per cent. Axis Bank raised Rs100 billion through QIP at 5 per cent discount to the floor price of Rs442.19 per share. Among the sectoral indices metal was up by 2.90 per cent, banks by 1.15 per cent and IT by 0.55 per cent," said Arun Leslie John, chief market analyst, Century Financial.

Foreign institutional investors were net buyers in the capital market as they purchased shares worth Rs3.02 billion on Monday, according to provisional exchange data

Meanwhile, Asian stock markets rose as investors awaited a meeting between the top US and Chinese trade officials later this week to review the first six months of phase one trade deal.

MSCI's broadest index of Asia Pacific shares outside Japan was up by 1 per cent. Japan's Nikkei returned from a holiday with a 1.7 per cent gain and the Hang Seng bounced by 2.2 per cent.

Meanwhile, Indian rupee appreciated 12 paise to close at 74.78 (provisional) against the US dollar to quote at Dh20.37 on Tuesday tracking weakness in the greenback and gains in the domestic equity market.

"INR is appreciated by 0.07 per cent to 74.8225 after appreciating by 0.21 per cent to 74.87 in previous session against US Dollar amid positive global market cues and strong buying in domestic market keeping rupee strong against dollar," said John.

During the session, the domestic unit witnessed an intra-day high of 74.77 and a low of 74.86 against the greenback.

Meanwhile, the dollar index, which gauges the greenback's strength against a basket of six currencies, was trading 0.13 per cent lower at 93.46.

Forex traders said gains in the domestic currency were supported by foreign fund inflows into domestic equity and debt markets.