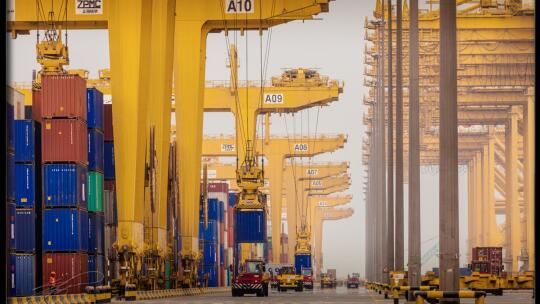 The UAE’s exports are expected to grow at an average annual rate of more than six per cent to cross Dh1.1 trillion mark, or $299 billion, by 2030 as the country diversify its economy and becomes a key driver of global trade movements, says a report.

The report, released by Standard Chartered, said global exports will also be increased by 100 per cent to $29.7 trillion from $17.4 trillion over the next decade.

The London headquartered bank, in its latest research — Future of Trade 2030: Trends and markets to watch, said 22 per cent of global corporates currently do or plan source in the UAE within the next five to 10 years. India and Mainland China will continue to be among the largest export corridors for the UAE, accounting for 18 per cent and 9.5 per cent of total exports in 2030, respectively.

“Singapore is a regional trade hub and strategic corridor for the UAE and is projected to grow at an average of 6.2 per cent per year until 2030. The UAE is focusing on expanding its exports beyond petroleum and reinforcing its position as a gateway to the Mena region,” the report said, adding that metals and minerals (60 per cent), gold (14 per cent), machinery and electricals (nine per cent) will be major contributors to the country’s exports by 2030.

Gold will be registering 8.3 per cent compound annual growth rate (CAGR) while metals and minerals, machinery and electricals will be growing at 7.6 per cent and 6.4 per cent CAGR, respectively, during 2020-2030 period, the report said.

Syed Khurrum Zaeem, managing director, head of trade and transaction banking for Africa and Middle East at Standard Chartered Bank, said India and Mainland China will continue to be among the largest export corridors for the UAE, accounting for 18 per cent and 9.5 per cent of total exports in 2030, respectively.

“As part of its ambitious diversification plans from hydrocarbons, the UAE is successfully working towards cementing its position as the key trade gateway. With global trade expected to double by 2030, trade practices will need to be reviewed to be more equitable and sustainable,” Zaeem said.

Atik Munshi, managing partner, FinExpertiza UAE, said the UAE has strived to be lesser reliant on the hydrocarbon resources since more than a decade and that has reaped good results.

“The country has always been an attractive export corridor in view of its excellent infrastructure and pro-business environment so the target of Dh1 trillion exports for 2030 seems very likely to be achieved,” Munshi told Khaleej Times on Monday.

During the last couple of years, he said there has been more inclusive changes in the legal structure as well as corporate laws which further strengthened the confidence of the investors and business community which in turn will boost foreign direct investment.

“With its strategic location and excellent connectivity, the UAE is an ideal candidate to act as an export corridor. Local manufacturing has gained focus which too would boost exports,” he said.

Bal Krishen, Chairman and CEO, Century Financial, said the projected rise in UAE exports is not a surprise since the policy reforms enacted in the country have made the country an attractive business destination.

“The country’s rising ranking in various indices is a testimony to this fact. The UAE is ranked 16th globally in the World Bank’s ‘Ease of Doing Business’ report 2021. The UAE has ranked 15th globally in Kearney’s 2021 Foreign Direct Investment (FDI) Confidence Index, up from 19th place in 2020. The UAE is one of the few countries globally that achieved a higher ranking this year in an increasingly competitive global FDI attraction environment,” Krishen told Khaleej Times.

He said the country’s solid infrastructure is an added advantage. The UAE is the main trading hub in the Middle East region and is a vital link to a market of over two billion people in Asia, Africa, and the Mena region.

“Dubai alone has over 120 shipping lines, and 85 airlines fly to more than 130 destinations. Moreover, with zero trade barriers and diverse import requirements, the country is improving horizons for UAE-based firms.

A proactive business environment and vital policy initiatives will help UAE diversify from oil and become a leading trading nation,” he said.

“The UAE, as a key growth driver, will attract more trade from India and major export markets,” said Vachani, who is also regional director for Middle East at Electronics and Computer Software Export Promotion Council (ESC).

Asia, Africa and the Middle East will see a ramp-up in investment flows, with 82 per cent of respondents saying they are considering new production locations in these regions in the next five to 10 years, supporting the trend towards rebalancing to emerging markets and greater risk diversification of supply chains.

The report, commissioned by Standard Chartered and prepared by PwC, is based on an analysis of historical trade data and projections until 2030, as well as insights from a survey of more than 500 C-suite and senior leaders in global companies.