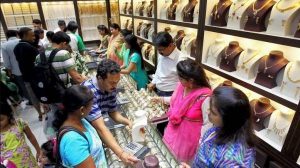 Prices are estimated to rise on global economic worries and festival demand.

Now is the right time to buy gold as prices will appreciate in the coming months due to global economy concerns and strong demand ahead of the Indian festival of Diwali.

Market analysts expect the yellow metal prices to increase approximately five per cent in the next two months from Dh148.25 on Monday to over Dh155 by December for 24K gold.

“Traditionally, gold has always rallied ahead of Diwali as India is the second largest consumer of gold. Rural areas of India are likely to witness rising demand as the Indian government had raised the minimum support price for agricultural crops recently. On the charts, gold has broken out of a daily consolidation pattern to the upside and UAE 24K gold price is expected to touch Dh149.80 by Diwali and Dh155.40 by December,” said Vijay Valecha, chief market analyst, Century Financial.

The festival of Diwali will be marked on November 7.

Valecha said that since political tensions around Saudi Arabia are lingering and trade tension between China and the US is not abating, there is a good probability that safe haven demand for gold will be sustained. “Also, demand is expected to surge with the major Indian festival of Diwali only a few weeks away.”

Otunuga, however, warned that a broadly stronger dollar remains a threat to upside gains.

Going forward, Otunuga believes gold is likely to be heavily influenced in the coming months by the dollar’s performance, US rate hike expectations, trade war fears and geopolitical tensions.

Alternatively, a broadly stronger dollar and prospects of higher US interest rates in 2019 could easily send the precious metal crashing. Investors will be closely observing if gold can push further away from the psychological $1,200 level, he added.

Century Financial’s Valecha believes uncertainties surrounding global trade, US monetary policy, the Italian budget, Brexit and the upcoming mid-term elections in the US will be the key factors driving gold price.