Oil is on the boil again 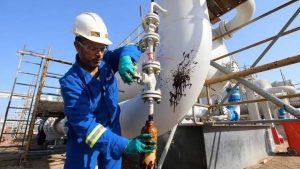 Crude surges after emerging from several weeks of hibernation

Supported by Opec-led production cuts, strong demand and the prospect of renewed US sanctions on Iran, oil rose above $75 a barrel on Tuesday and is poised to hit $80 with demand growth predicted to go higher.

“Economies with high income elasticity of demand also have high price elasticities, suggesting oil may be capped at $80/b,” oil analysts at Bank of America Merrill Lynch said.

With the global economy on a cyclical upswing, how the battle between the price and income effects on oil consumption plays out is crucial, analysts said. However, analysts at Moody’s expect oil prices to remain volatile, ranging between $45-65 per barrel, and forecasts average prices of $60 per barrel in 2018 and 2019 before softening to $55 per barrel. 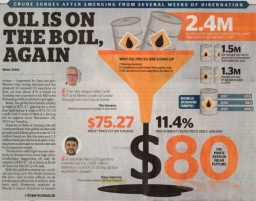 “The recent rise in oil prices will lead to a short-term reduction of pressures on GCC governments’ balances sheets by reducing fiscal deficits and slowing the build-up of government debt,” analysts at Moody’s said.

“Looks like Opec is at it again,” he tweeted.

“Oil prices are artificially Very High! No good and will not be accepted!”

Vijay Valecha, chief market analyst, Century Financial, said the price jump was powered by drawdown in US crude oil inventories which showed an overall decline of 1.071 million barrels and reduction of 1.115 million barrels in Cushing which is the delivery point of West Texas Intermediate Crude. A surprise fall in US gasoline inventories by 2.968 million barrels is a proof of strong global economic growth and reflects declining refinery utilisation due to seasonal maintenance, he said.

Ole Hansen, head of Commodity Strategy at Saxo Bank, said crude oil surged higher after emerging from several weeks of hibernation. “The rally began after both WTI and Brent crude oil broke through key technical levels and after receiving fundamental support through the renewed focus on supply disruptions.”

Hansen said Washington looks increasingly likely to re-introduce sanctions against Iran on May 12, something that could hurt its ability to produce and export crude oil. “The risk of the US walking away from the Iran nuclear deal may well have increased after Trump replaced his Secretary of State and National Security Adviser with known hawks on Iran, Venezuela, and North Korea.”

The US has until May 12 to decide whether to quit a nuclear deal with Iran and reimpose sanctions against Opec’s third-largest producer, tightening global supplies.

Stephen Innes, head of trading for Asia-Pacific at futures brokerage Oanda, said new sanctions against Tehran “could push oil prices up as much as $5 per barrel”.

Opec’s supply curtailments and the threat of new sanctions are occurring just as demand in Asia, the biggest oil-consuming region, has risen to a record as new and expanded refineries start up from China to Vietnam.

The latest US inventory figures are expected to show a 2.6-million-barrel drop in crude stocks.

One of the factors limiting the oil rally is rising US production. US output, supported by high prices, has hit record levels, partially offsetting the Opec-led cuts.