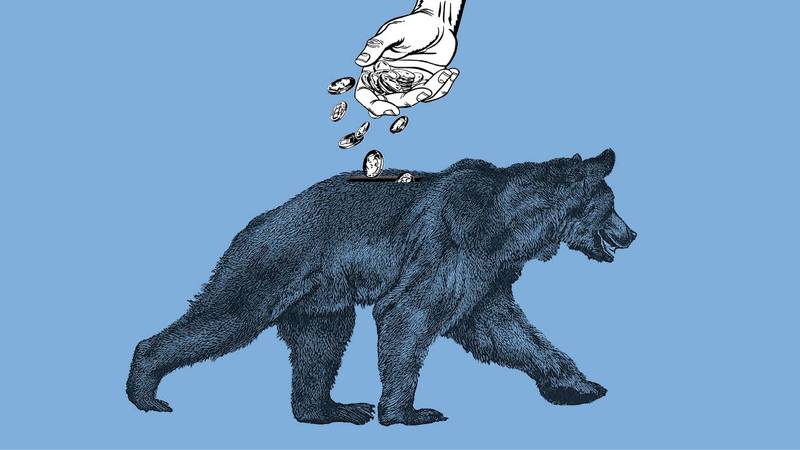 The National - How investors can survive a bear market

Bear market talk is back in fashion as inflation rises, stock markets go haywire and the doom-mongers do their best to scare us to death.

This time, it is the turn of British billionaire hedge fund manager Jeremy Grantham, who has made headlines by claiming the US is in the midst of only its fourth super-bubble of the past 100 years and now it is ready to burst.

The other super-bubbles went bust in 1929, 2000 and 2008, and the latest one is following a similar pattern as share prices rise, “flaky” speculative corners of the market crumble and the rot starts to infect the big blue chips, he says.

There is plenty of market madness out there, such as the meme stock craze, Dogecoin, non-fungible tokens (NFTs) and the clamour over star fund manager Cathie Wood’s “disruptive tech” ARK Innovation ETF, which is down by half this year.

Before you run for cover, it is worth remembering that Mr Grantham was claiming the US was in an “epic” bubble this time last year, only for global share prices to climb 22.31 per cent in 2021, as measured by the MSCI World Index.

Yet, January was volatile, with most indices falling by double digits in the worst start to a year since 2016, says Olivier Marciot, senior portfolio manager at investment management company Unigestion.

“Investor sentiment shifted from very optimistic to very pessimistic in a matter of weeks.”

Omicron and tensions between Russia and Ukraine played their part but “the main driver has obviously been increasingly hawkish central banks, especially the US Federal Reserve”, Mr Marciot says.

Stock markets have flown on two decades of near-zero interest rates and bottomless stimulus but as inflation hits a 30-year high, they may now come crashing back to earth.

A stock market correction happens when share prices fall 10 per cent and it is called a bear market when they fall 20 per cent. January gave us the former, but not the latter.

Just as investors relaxed, social media giant Facebook, now renamed Meta, crashed 26 per cent, the biggest one-day loss in history for a US company. The drop wiped around $230 billion off its market cap, reducing it to $660bn and rattling investor nerves

A host of hot technology stocks that benefitted from the Covid-19 lockdowns have had a hard time lately, James Yardley, senior research analyst at Chelsea Financial Services, says.

TV streaming platform Roku and MRNA vaccine maker Moderna fell by about two thirds, Mr Yardley says. “The tech bubble hasn’t totally burst, but there is a lot of pain out there.”

He reckons this may be a buying opportunity because their overstretched valuations are now starting to offer better value.

“My view is that deflationary forces will ultimately reassert themselves, the Fed will stop hiking and growth stocks will do well again. But I'd go buy safer, established options. I might even consider Meta, following its recent fall.”

If bear market talk scares you, then you should not be in the stock market at all, Dan Lane, senior analyst at FinTech Freetrade, says.

“That is not a throwaway comment — it is a basic rule. If your response to a crash is to panic and sell, equity investing is not for you.”

Even confident, long-term investors should examine their portfolio to ensure it still reflects their investment goals and attitudes to risk.

After the recent bull run, many investors may have outsize exposure to US technology, often without even realising it, Mr Lane says.

“The likes of Vanguard’s All-World ETF carries a global label but 60 per cent of its holdings are in the US and 25 per cent in tech. US trackers are heavy in tech, too.”

Bonds are a traditional safe haven in a market meltdown but this may no longer be the case, Mr Lane says.

“Gold might be a stop gap but we have to remember that is all it is. It does not provide an income and commodities are erratic at the best of times.”

Bear markets happen all the time, with 26 in total since the Great Crash of 1929, says Dino Ibric, vice director at online investment and fund platform Swissquote.

“There have been far more bull markets and long-term investors have gained a lot more than they have lost.”

If you are still anxious, there are several things you can do. The first is sit tight, Mr Ibric says. “Time is on your side. Just be patient. Every bearish market is followed by a bullish one.”

If you are worried about paying a lump sum into this market, invest regular monthly amounts instead, Mr Ibric says. “This reduces the impact of market volatility and spreads your costs and risks.”

Balance your portfolio by adding some “defensive” stocks such as utilities, consumer goods and healthcare companies.

You could spread your money around, with gold considered to be a strong hedge against both inflation and stock market risk.

“You could allocate a small proportion of your portfolio into Bitcoin, which some call digital gold,” Mr Ibric suggests.

It helps to learn a bit about investing. “Read up on the subject. Find out more about the companies that interest you. This way, you will be more comfortable in your investment decisions and more likely to stick with them.”

The last bear market was the coronavirus crash between late February and March 2020, when shares tumbled by a third in little more than a month, Jason Hollands, managing director at Tilney Investment Management Services, says.

Selling back then would have been a disaster as the market staged a sharp recovery. “Patient investors were back in the money by September and those with the courage to invest new money made a killing.”

The lesson is clear, Mr Hollands says. “Never let emotions take control when the sky appears to be falling in. Bear markets are typically a fantastic opportunity to pick up shares on the cheap.”

Having said that, the coronavirus crash was only stemmed by the largest stimulus programme in history, led by the Fed. Without that, the recovery may not have been so impressive. In fact, there may have been no recovery at all.

There will be no repeat bailout this year, as the Fed and others raise rates and taper stimulus.

Rising interest rates tend to weigh on stock market returns as investors can secure higher yields from less risky rivals such as cash and bonds.

Limit your exposure to US technology giants, which look expensive after years of growth, Mr Hollands suggests.

“Many have been blinded to this overvaluation as tech companies voraciously buy their own shares, investors chase past performance and money pours into tracker funds.”

The time to review your portfolio is before a crash. “Ditching shares and trying to reorganise a portfolio in the midst of a period of turbulence is a little bit like trying to change an aircraft engine mid-flight,” Mr Hollands says.

If we do have another crash, don’t try to be too clever. “Resist the temptation to take short-term positions and second-guess movements when prices are lurching all over the place. The worst days for the markets are often followed by the best days,” Mr Hollands says.

Mr Ibric tips the Vanguard Consumer Staples ETF, a defensive exchange-traded fund that has $5.7 billion in assets with an exposure to 97 consumer stocks.

The one thing you need in a bear market is something money cannot buy. A cool head.