The National – Is the latest market crash a great buying opportunity? 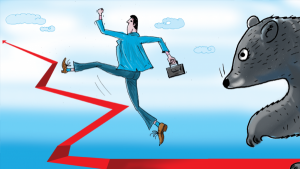 With Wall Street’s fear gauge at the highest level since February, investors can either shop for a bargain or run for cover

These are tough times for investors, as the 10-year bull market run appears to have finally roared its last amid growing volatility.

After the turbulent few weeks,US stock markets are now negative for 2018, with tech heroes such as Facebook, Amazon, Netflix and Google-owner Alphabet all slumping in recent months.

Some unwelcome records have been set this year, with Facebook posting the largest single drop in market value in US history on July 26, when it fell 19 per cent after a disappointing second quarter earnings report, wiping out $120 billion in market value in a single session.

Chinese tech and gaming behemoth Tencent Holdings has also set the wrong type of record. Its market cap has plunged from $573.3bn in January to $324bn at time of writing, a world record loss of nearly $250bn.

Wall Street’s so-called fear gauge, the CBOE Volatility Index, is at 25, the highest since February’s sell off, suggesting more trouble to come.

At times like these, investors have a choice. They can either duck and run for cover, or pluck up their courage and go shopping for shares and funds. Everybody likes a bargain so is it time to hit the sales?

Steve Cronin, the founder of DeadSimpleSaving.com, an independent community for financial education and support in the UAE, warns that nobody can correctly time market rise and falls. “Those who try are usually the poorer for it.”

What you can do is buy shares after prices have fallen. “Instead of panicking and selling, those who are still many years away from retirement should be delighted at this opportunity to buy shares at a discount,” he says.

To reduce the risk, don’t throw all your money in once and aim to keep it invested for a minimum of five to 10 years, preferably longer, to give markets ample time to recover.

Mr Cronin suggests keeping it simple by investing a regular monthly sum in a cheap, globally-diversified index-tracking exchange traded fund (ETF). “That way you will pick up stock during the market lows and be rewarded when it rebounds. Leave it there forever and benefit from the gains.”

Mr Cronin tips Vanguard FTSE All-World UCITS ETF (VWRD), which has a global spread of companies. “This means you won’t have to waste time trying to guess which sector or country will do better, and you can get on with your life.”

Steven Downey, chartered financial analyst candidate at Holborn Assets in Dubai, says don’t panic and throw in all your spare funds at once because the volatility striking markets this spring, summer and now autumn is not a short-lived blip.. “You can expect to see more dramatic moves which should give you more opportunities to buy shares at discounts.”

Some mutual investment funds allow you to benefit from increased volatility, he says, for example Amundi Absolute Volatility World Equities, which aims to achieve a positive return in any type of market condition.

He also recommends the iShares $ Floating Rate Bond UCITS ETF (FLOT.LN), which invests in floating rate US notes which should increase in value if US interest rates continue to increase.

Yogesh Khairajani, investment research analyst at brokers Century Financial in Dubai, says bear markets only happen when there is a strong probability of recession. “The IMF recently downgraded its forecasts but still predicts that global GDP will grow 3.7 per cent this year.”

Therefore, now, looks like a tempting buying opportunity with many markets appearing to offer good value as measured by the price/earnings (P/E) ratio, he says.

This divides share prices by earnings, with a result of 15 showing fair value, and anything below potentially cheap. “China is trading at P/E ratio of 10.2 time earnings yet its GDP is expected to grow 6.6 per cent in 2018. Russia is trading at just 5.4 times earnings, yet is expected to grow 1.8 per cent, while Indonesia trades at 15.3 and should grow at a healthy 5.2 per cent. All look tempting.”

India looks relatively expensive at 18.8 time zones but is forecast to grow a healthy 7.5 per cent, justifying its higher valuation, Mr Khairajani says.

He is tempted by Chinese stocks, down more than a third. “Long-term investors have a valuable opportunity to pick up Tencent, as well as e-commerce giant Alibaba and fellow technology stock Baidu.”

He says Germany has a P/E ratio of 13.7 and is his top European pick. “The iShares MSCI Germany ETF (EWG) a nice way to invest”.

Nobody can say with any certainty where stock markets will go next. Buying today is tempting but you should also keep some ammunition in reserve, in case markets fall even lower tomorrow. Then all you have to do is be patient and wait for the recovery. It always comes eventually.

There are many factors worrying investors right now and triggering a rush out of stock markets. Here are four of the biggest:

The US Federal Reserve has increased interest rates three times this year in a bid to prevent its buoyant economy from overheating. They now stand at between 2 and 2.25 per cent and markets are pencilling in three more rises next year.

Kim Catechis, manager of the Legg Mason Martin Currie Global Emerging Markets Fund, says US inflation is rising and the Fed will continue to raise rates in 2019. “With inflationary pressures growing, an increasing number of corporates are guiding profitability expectations downwards for 2018 and 2019, citing the negative impact of rising costs.”

At the same time as rates are rising, central bankers in the US and Europe have been ending quantitative easing, bringing the era of cheap money to an end.

High US rates have driven up the value of the dollar and bond yields, and this is putting pressure on emerging market countries that took advantage of low interest rates to run up trillions in dollar-denominated debt. They have also suffered capital outflows as international investors have switched to the US, driving markets lower. Omar Negyal, portfolio manager of the JP Morgan Global Emerging Markets Income Trust, says this looks like a buying opportunity. “Despite short-term volatility we remain positive about long-term prospects and profitability for emerging markets.”

Ritu Vohora, investment director at fund manager M&G, says markets fear that US President Donald Trump’s spat with China will escalate into a full-blown global trade war, with both sides suffering. “The US economy is robust enough to absorb higher input costs now, but this may not be the case as tariffs escalate. However, with a host of factors hitting investor sentiment, this is becoming a stock picker’s market.”

Europe faces two challenges right now in the shape of Brexit and the new populist government in eurozone member Italy.

Chris Beauchamp, chief market analyst at IG, which has offices in Dubai, says the stand-off between between Rome and Brussels threatens to become much more serious. “As with Brexit, neither side appears willing to step back from the edge, threatening more trouble down the line.”

The European economy may also be slowing, Mr Beauchamp warns. “A four-year low in eurozone manufacturing confidence highlights the fact that producers see a bumpy road ahead, with US-EU trade talks remaining a major question-mark for exporters.”