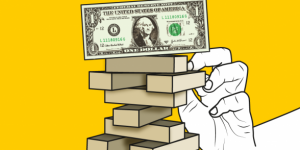 The National – Is the US dollar heading for a crash?

While now is a good time to earn in dollar-linked dirhams, that may change depending on the greenback’s fortunes

These are great times to be paid in US dollars. The world’s unofficial reserve currency is on a roll, beating all-comers as the US economy grew at an annualised rate of 4.2 per cent in the second quarter.

To put that into perspective, that is almost double the eurozone second-quarter growth of 2.1 per cent.

The US economy is now enjoying the second longest period of economic growth since the Second World War, and if sustained into next summer it will beat the record 10-year between 1991 and the dot-com meltdown in March 2001.

To stop the economy overheating, the US Federal Reserve has been increasing interest rates, which is driving the greenback even higher.

The latest increase came last week, when chairman Jerome Powell announced that the Fed was lifting rates by 0.25 per cent to a range between 2 and 2.25 per cent. This is the third this year, and the eighth since it started tightening in 2015.

Mr Powell said the US economy is now strong enough that the stimulus of low rates is no longer necessary. This may be the last increase for this year but analysts are forecasting another three in 2019 and one more in 2020, which would lift rates above 3 per cent.

If the Fed follows through the dollar may rise even higher, as global investor inflows surge into the country in search of higher returns.

UAE residents will hardly need reminding that their dirham-linked dollar earnings now go much further when travelling, buying assets in other countries or making remittances back home.

Gaurav Kashyap, head of futures at Dubai-registered broker EGM Futures, says the US dollar is up a further 3 per cent this year against a basket of weighted major currencies. “I have maintained a dollar bullish bias for more than a year and expect more upside moves through the end of 2018.”

As the US leads the world in hiking rates, money will continue to flow into US assets such as the dollar, Government bonds (known as Treasuries) and stocks.

Mr Kashyap says President Donald Trump’s trade war could backfire by hitting US growth and knocking dollar optimism, but it could go either way. “The US dollar is a safe haven asset. If the trade war hits global markets, the US dollar could thrive.”

Devesh Mamtani, head of investments and advisory (financial markets) at Century Financial Brokers, says the dollar bull trend should continue as the US economy created 201,000 jobs and average hourly wages climbed 2.9 per cent in August, both higher than expected, according to the non-farm payrolls report. “Rising geo-political tensions with Iran and Trump ratcheting up the battle with China could trigger a flight of capital to safe haven US Treasuries.”

However, Mr Mamtani says it is tough trying to call the top or bottom of any market. “For remittance purposes most people should take advantage of current rates, while more savvy investors can use futures contracts to hedge their positions, after taking advice from a qualified adviser.”

The strong US currency is punishing emerging market countries that have borrowed heavily in dollars and now find their debts more expensive to service.

Argentina, Turkey, Brazil and South Africa are in trouble and Rebecca O’Keeffe, head of investment at online trading platform Interactive Investor, says any further contagion could ultimately infect the US. “The increasing divergence between the US and other economies may cause some to worry how long the party can last for investors in the States.”

However, investors who are keeping their faith in US stocks and shunning emerging markets are getting it right for now, she added. “At some point emerging markets may become more attractive, but for now investors are happy to steer clear.”

Commodities such as oil, metals and minerals are priced in dollars so when the greenback rises, they get more expensive for buyers in other currencies, hitting demand and prices.

Fawad Razaqzada, technical analyst at currency brokers Forex.com, says demand has also been hit by fears over emerging markets and China, still the world’s most voracious consumer of commodities. “Copper, silver and to a lesser degree gold have been absolutely hammered recently.”

However, this could be a buying opportunity for dollar earners, Mr Razaqzada says. “Demand for these commodities will never perish. At these relatively inexpensive levels, they also become attractive for long-term investors.”

The downside for UAE residents is that because the dirham is pegged to the dollar, local interest rates are rising in lockstep with the Fed.

Last week, the Central Bank of the UAE followed the Fed by lifting its benchmark interest rate 25 basis points to 2.50 per cent on the certificate of deposits it uses to transmit interest rate changes to the local banking system.

If the Fed meets market expectations by bumping up rates three times next year, this would drive UAE interest rates to 3.25 per cent.

Faisal Durrani, partner and head of research at real estate specialists Cluttons, which operates in Dubai, says this mismatch between economic performance and monetary policy isn’t new. “It has sparked debates in the past about the need to re-examine the merits of a fixed peg.”

Further interest rates could pile added pressure on the local property market, where the total value of real estate transactions fell 16 per cent to Dh111 billion in the first half of 2018, according to the Dubai Land Department.

Mr Durrani says this drives up costs for both mortgage borrowers and property developers. “It may catch some people off guard, but the generally mute property market should shield households to an extent.”

Have we reached peak dollar? Luca Paolini, chief strategist at fund manager Pictet Asset Management, reckons the US dollar is now “as richly valued as it’s been in for at least a quarter of a century”, but cannot go much higher. “While dollar strength is underpinned by a robust US economy, rising inflation and expansive fiscal policy, the greenback’s ascent may have run its course.”

The US dollar may now be overbought and vulnerable to a correction. “Further gains are likely to be limited unless there’s an inflationary surprise or the current administration offers up another round of tax cuts.”

Emerging market valuations now look oversold, Mr Paolini says, which could make now a good time to buy emerging market stocks for those willing to take a chance. “We are less enthusiastic about European and US equities, however, particularly as the latter look poor value.”

Enjoy dollar strength for now but remember that the good times will not roll forever. They never do.