The National - What does Trump’s Covid-19 diagnosis mean for your investment portfolio? 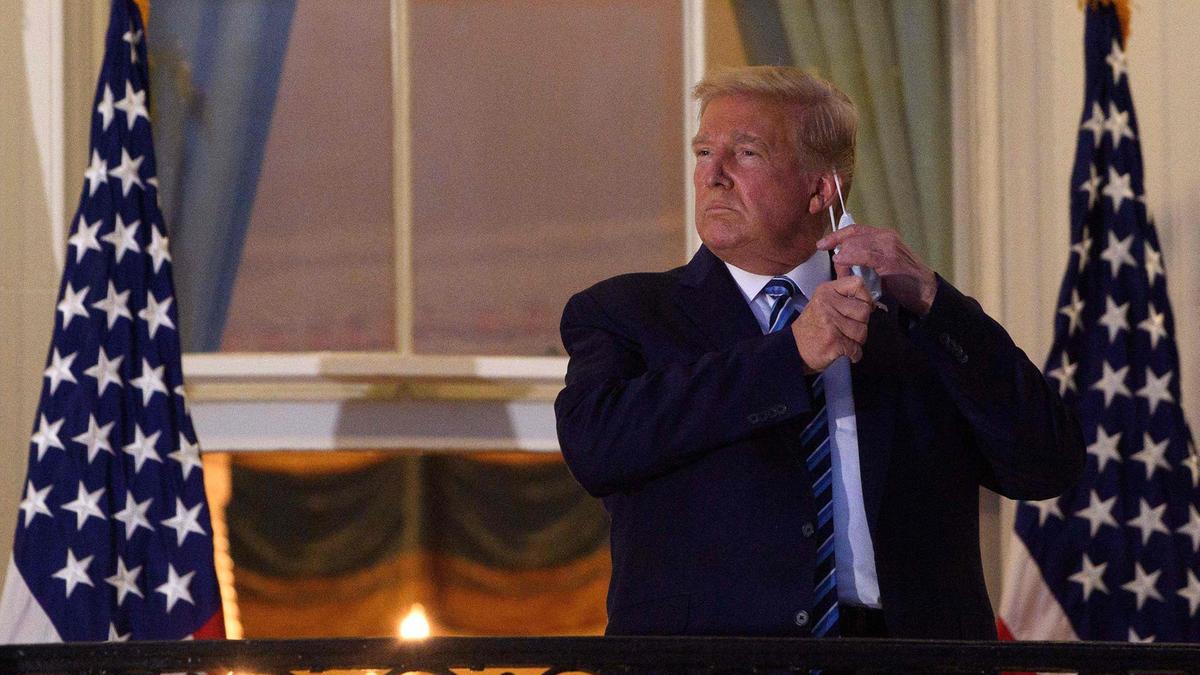 Just when investors thought the US election couldn’t get more complicated, President Donald Trump’s shock coronavirus diagnosis gave stock markets something else to get in a flap about.

Global shares crashed when the news broke, proof that markets favour a victory for the tax-cutting Republican president, but recovered when he checked out of the Walter Reed Army Medical Centre on October 5.

But markets plummeted again after President Trump scrapped negotiations over Covid-19 economic relief funding until after the election, claiming the Democrats were not negotiating in good faith.

President Trump may be “FEELING GREAT!”, in his own tweeted words, but investors are increasingly giddy in the final weeks of the campaign. Especially since this one could stretch beyond election day on November 3, with President Trump threatening to dispute any defeat.

So, how will your portfolio be affected in the volatile days ahead and how should you respond?

Steen Jakobsen, chief economist and chief investment officer at Saxo Bank, says the US election is the “biggest political risk we have seen in several decades”, coming amid a deep economic crisis, zero interest rates and infinite government and central bank stimulus. “Markets and individual freedoms have never been more under attack,” he says.

Matt Weller, global head of market research at GAIN Capital, says the US is delivering one massive storyline after another. “Ongoing protests, more than 200,000 dying from Covid-19, the biggest quarterly decline in GDP in more than 70 years, the death of a Supreme Court justice, the leak of Trump’s taxes, the acrimonious first presidential debate, and now Mr Trump getting hospitalised, then released.”

Amid all this, the biggest surprise is that opinion polls have remained stable, Mr Weller says, with PredictIt showing former vice president Joe Biden the clear 64-39 favourite at the time of writing.

Victory for the Democratic challenger could spell bad news for US technology giants, which have been the stand-out stock market performers of the past decade. “Traditionally, the Democrats have favoured tighter business regulation and they may even look to break up companies like Amazon and Facebook.”

Mr Valecha says this could hit the US Nasdaq tech index and the S&P 500, where information technology is now the biggest weighting at 25 per cent of the index.

A victorious Mr Biden is expected to unleash a $2 trillion blast of infrastructure, healthcare and education spending. Yields on US bonds are rising as a result, with investors expecting the spending splurge to trigger higher inflation and interest rates.

Mr Valecha says rising interest rates could boost bank profits by allowing them to widen their net interest margins, the difference between what they earn from lending money and pay savers for deposits.

This could also lift smaller US companies, which tend to lead the charge on a recovery, he adds.

On the other hand, Mr Biden is expected to increase corporate tax from 21 per cent to 28 per cent, which will hit company profits.

Jim Wood-Smith, chief investment officer at Hawksmoor Investment Management in London, says Mr Biden is likely to pursue a green energy policy. “US renewable energy stocks have soared this year in anticipation of a victory for Mr Biden, but are vulnerable should he lose.”

Michael Taylor, global head of front office at ADSS, says the good news is that the US dollar typically strengthens in the months following an election, regardless of who wins.

The greenback may perform better if President Trump wins as he may escalate trade tensions with China, resulting in the US dollar being seen as a safe haven.

Mr Taylor says the consensus is that a Mr Biden victory would be dollar negative, as higher taxes would not be looked upon favourably by Wall Street.

The third option of a contested result settled by the Supreme Court may trigger a flight to safety, he adds. “We would likely see ‘risk-off’ sentiment in global stock markets but dollar strength, at least in the short term.”

Mr Jakobsen says the long-term outlook for the US dollar is negative as the country struggles to cope with its huge budget deficit and mounting debt. While this is bad news for dirham earners, it may bring wider benefits. “It would increase global liquidity and allow the rest of the world to finance on more affordable terms.”

Gold may benefit as it is priced in dollars and will be cheaper for non-dollar buyers, which could drive demand.

Georgina Howard, chartered financial planner at The Fry Group Middle East, says the key to successful, long-term investing is to maintain a well-diversified portfolio that is spread across a range of asset classes such as equities, fixed income, commodities and property in different geographical regions and sectors.

Right now, she favours emerging markets. “They are benefitting from a weak US dollar, and have made a quicker economic comeback from Covid-19, notably China. Emerging market high-yield bonds may appeal if you are searching

While electoral uncertainty could create a buying opportunity, Ms Howard urges caution. “Be wary of value traps like energy and banks. These sectors may look attractive but are not necessarily long-term buying opportunities, given the impact of travel disruption on oil prices, while low interest rates do not support bank share prices. Banks are also reluctant to lend due to higher default rates.”

Fund manager Exante’s senior analyst Victor Argonov predicts another gold rush, possibly driving the price from today’s $1,891 to $2,200 by the end of the year.

Gold is already the best investment of the year, he says. “I wouldn’t be surprised if it doubled in the next three years.”

A combination of political and economic uncertainty, and low interest rates – which reduce the appeal of rival safe havens such as cash – could help gold maintain its shine.

As Mr Biden maintains his poll lead, Mr Weller says investors have seen the US dollar trend lower, US stocks recover, US Treasury bond yields spike and gold climb. “This suggests traders are preparing for a potential reflation trade, where more aggressive government spending boosts GDP growth at the risk of rising inflation.”

If this happens, beneficiaries may include US stocks, “including beaten-down value and cyclical stocks, growth-oriented currencies like the Australian dollar, and precious metals including gold and silver”, Mr Weller says.

He adds that more conservative assets could struggle, including US bonds, utility stocks and real estate investment trusts. “Safe-haven currencies such as the Japanese yen and Swiss franc may suffer, and possibly the US dollar itself.”

Mr Jakobsen says Saxo Bank is now invested 35 per cent in equities, 20 per cent in fixed-income products such as bonds and 15 per cent in gold. Other holdings include commodities and inflation-linked bonds, which offer a hedge against rising prices.

Stuart Ritchie, director of wealth advice at AES International, says most ordinary investors do not have to worry about short-term market shifts. “If you weren’t swayed by the Covid-19 crash in March and stayed invested, you shouldn’t be running scared now.”

His advice? “Sit tight and do nothing. Markets always rebound, given time. When they do, they work in favour of those who stuck to their strategies.”

Do not make rash investment decisions based on the latest headlines. “If you are globally diversified across asset classes and geographies, you are already well placed to benefit wherever markets move,” Mr Ritchie says.

Mr Valecha says US companies should remain a good bet for investors despite the country’s political twists and turns “due to their innovation and better corporate governance practices”.

Investors should therefore treat any dip as a buying opportunity. “In the long term, US Federal Reserve monetary policy is the biggest driver of US stock market performance, not politics. The Fed has already committed to low interest rates for the long term, so investors need not worry.”