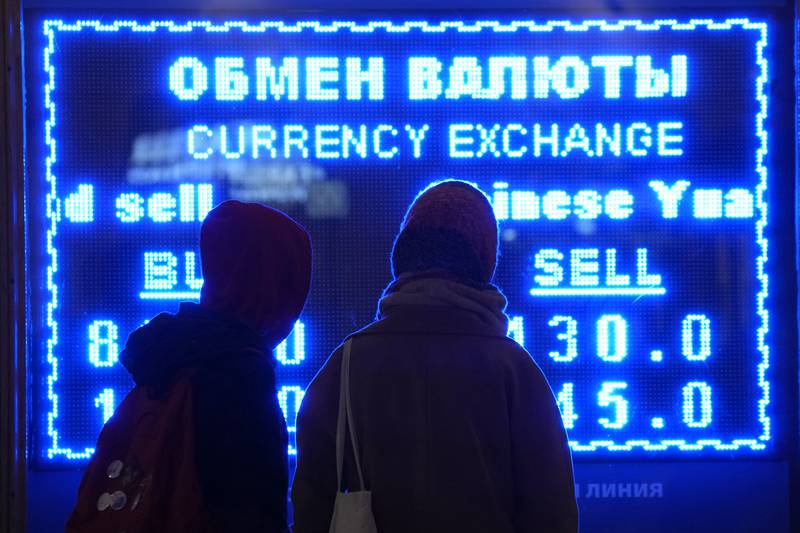 The National - Why investors should remain defensive amid Russia-Ukraine crisis

The global economy had barely recovered from the coronavirus pandemic when Russia's military offensive in Ukraine began.

The outlook is bleak as the price of fuel and food rockets, and shares, currencies and even safe-haven assets such as gold go haywire.

Oil prices rose to almost $133 a barrel on March 7, their highest level since 2008, after the US banned Russian energy imports, while Goldman Sachs predicts it could reach $175 by the end of the year if the conflict is not resolved.

US inflation has hit a 40-year high of 7.9 per cent, driven by rising gas, food and housing costs. Currencies are also volatile — and not just the Russian rouble.

The euro has fallen sharply, as the war is right on the EU’s doorstep. Countries heavily reliant on all imports, such as India, have also been affected.

The war is primarily a humanitarian and political disaster, but it is also a financial one, says Mike Hollings, chief investment officer at LeifBridge, part of Shard Capital. “Investors are shocked by events and seeking safe havens.”

“The war’s outcomes are still so hard to predict, as is its duration, that cutting exposure to equities seems to be the most prudent approach.”

But there winners as well as losers. Airline stocks and hotels are struggling as fuel costs soar and traveller confidence plummets, while defence stocks are flying.

Oil stocks are the major beneficiaries, with BP surging by more than 5 per cent and Total Energies by about 4 per cent after the US banned Russian oil. In New York, Chevron rose by 7.8 per cent and Exxon Mobil was up 4.8 per cent.

Inevitably, Russian shares have been hit hardest of all, Susannah Streeter, senior investment and markets analyst at Hargreaves Lansdown, says. “With the sanction screws turning ever tighter and access to the depths of its war chest out of reach, Russia’s financial system looks in even greater peril.”

The Fitch ratings agency says that the country is close to defaulting on its debts and is expected to miss a series of bond payments. “Russia has now retreated further into junk status,” Ms Streeter says.

Investors should stay calm and resist the temptation to dump all their risky assets in a panic, Emma-Lou Montgomery, associate director at Fidelity International, says. “You will only be locking in recent losses and miss out on any recovery. As always, a diversified portfolio is key.”

If you really want to know how the war is going, look at the oil price, Mr Beauchamp says. Although crude prices have retreated to around $112 a barrel at time of writing, “they certainly don’t think the prevailing situation will improve any time soon”.

With supply constrained and demand increasing as the market wonders how to replace seven million barrels of Russian oil a day, the only way is up for energy prices, especially in Europe, Ms Streeter says.

“There is no magic wand to speed up the shift to renewables. It is going to be a hugely difficult and expensive transition.”

If this continues, the EU, India and Japan will falter, “leading to stagflation sooner rather than later”, he says.

By contrast, oil exporters in the Gulf, such as the UAE and Saudi Arabia, will experience a strong recovery in government revenue, he says.

Oil is not the only commodity affected, as wheat prices have risen by about 50 per cent, Ms Streeter says.

Ukraine and Russia account for about 30 per cent of the world's traded wheat, and exports have ground to a halt.

The Chicago Wheat index hit a record high of $13.63 a bushel amid volatile trading, up from less than $8 in mid-February.

Prices have cooled a little, but futures contracts trading in Chicago are still around $11 per bushel, a 14-year high, Ms Streeter says. “This is set to make a trolley load of goods more expensive with the price of baked goods … and pasta in particular expected to rise.”

Some producers may have hedged against this dramatic rise in prices for now, but the volatility is expected to linger, she says. “Our food bills are going up along with everything else.”

Physical metals, too, have surged on fears of shortages.

The London Metal Exchange was forced to suspend trading in nickel last Tuesday after reporting “unprecedented movements”, with prices more than doubling to $100,000 a tonne.

Russia is a leading global exporter of the metal, which is in demand as the electric vehicle revolution speeds up, Ms Streeter says. “Russia is the world’s leading exporter and palladium is an essential material for computer chip manufacturing.”

In times of trouble, investors race to buy the world’s reserve currency and safe haven, the US dollar.

It has been the same this time, too.

This is bad news for anybody earning money in other currencies, who face a double inflation shock as commodities are all priced in US dollars, Mr Hollings says. “Energy and food prices are rising sharply in US dollar terms, while the currencies consumers buy them in are falling relative to the greenback.”

Currencies pegged to the dollar, such as the UAE dirham, enjoy some protection against inflationary pressures, he says.

Many people who raced to load up on dollar assets such as US Treasuries did so after dumping the euro.

It has been a bad year for the single currency, which fell below parity against the haven Swiss franc for the first time since January 2015.

The euro is down around 5 per cent against the dollar, although it has recovered slightly on expectations of tighter monetary policy from the European Central Bank, which plans to wind down bond purchases and increase interest rates to curb inflation in a surprisingly hawkish switch.

Currencies of the countries closest to the war have also been sold off, Vijay Valecha, chief investment officer at Century Financial, says. “Sweden could face repercussions and its currency faces near-term headwinds. Yet energy exporter Norway’s currency is rising as it benefits from higher oil prices.”

Oil importing countries such as India and Pakistan are suffering as oil prices rise, Mr Valecha says. “India imports more than 80 per cent of its oil and its import bill could top $100 billion this year. The Indian rupee has plunged to a record low of 77.02 against the dollar.”

Emerging market currencies are likely to remain under pressure as dollar strength increases the cost of servicing their debts, at the same time as they spend more on energy imports.

The British pound is a “risk-on currency” and has been hit by the war as investors switch into risk-off mode.

In these uncertain times, even safe haven gold is volatile. The price recently spiked 3.5 per cent to $2,068 an ounce, within touching distance of its $2,804 August 2020 record, but has since fallen back to $1,987 at the time of writing.

Like every other asset class, the gold price will continue to be driven by headlines, he says. Investors should, therefore, resist the temptation to go all-in on gold.

The precious metal may be an inflation hedge but it does not pay any income, while bonds are volatile and cash is being eroded in real terms by inflation.

Today, your best defence is to diversify between asset classes and invest for the long-term.