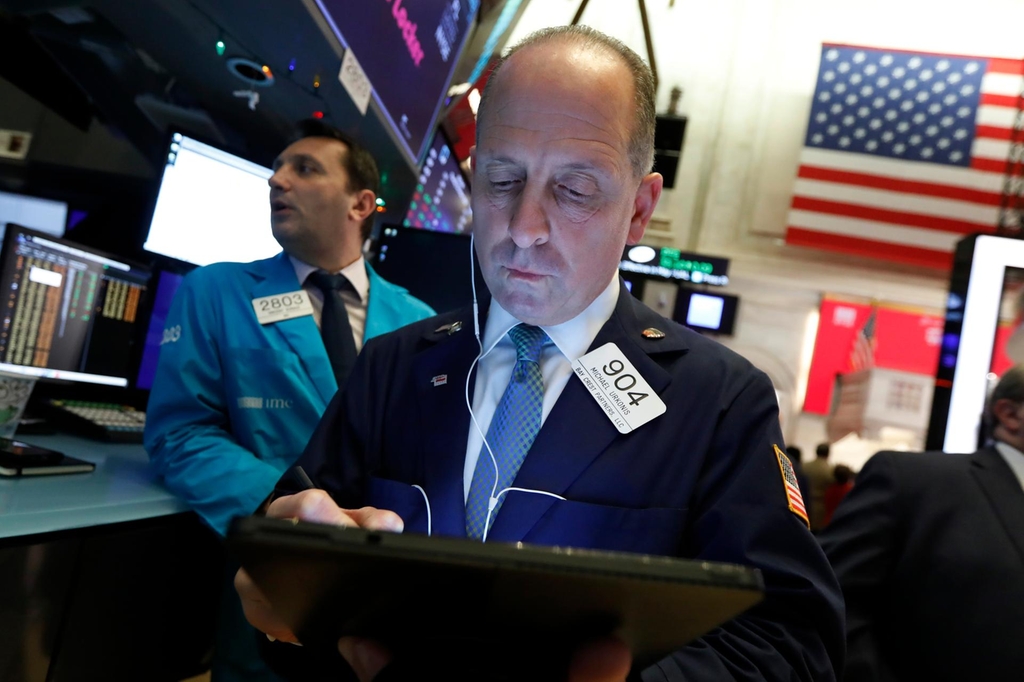 The National - Will the long boom in global markets last another year or should investors cut and run?

The past year has been excellent for investors but it is now drawing to a close and as always, past performance offers a little guide to how markets will perform in the year ahead.

The new year is upon us, so which asset classes will fly in 2020 and which ones look vulnerable? And will investors be celebrating this time next year as well?

The global economy is going through a “synchronised slowdown”, according to the International Monetary Fund’s latest World Economic Outlook report in October, with a projected growth rate of only 3 per cent in 2019, the weakest since the financial crisis.

Global growth should improve “modestly” in 2020 to 3.4 per cent, but that is down from a 3.6 per cent forecast in April. Worryingly, this recovery is “not broad-based and is precarious”, amid rising trade and geopolitical tensions.

Advanced economies will fare worse with  the growth of just 1.7 per cent, as US growth slows to 2.1 per cent from 2.4 per cent in 2019. Emerging markets should compensate by increasing their growth rates to 4.6 per cent from 3.9 per cent. However, most of the increase is expected to come from a rebound in “stressed” countries such as Argentina and Turkey, and countries that slowed significantly this year, including Brazil, Mexico, India, Russia and Saudi Arabia.

In contrast, growth in the Middle East and Asia should rise to 2.9 per cent from 0.9 per cent.

Without monetary stimulus, global growth would be 0.5 per cent lower, the IMF said.

Rick Lacaille, global chief investment officer at State Street Global Advisors, says the good news is that “2020 is not a year of recession”.

“We expect the global economic recovery to continue against a backdrop of continued monetary easing, policy shifts and persistent pockets of resilience,” he says.

Mr Lacaille says there are still plenty of risks out there, notably Brexit, US-China trade tensions, Iran and impeachment proceedings against US President Donald Trump.

Climate change is also a growing long-term risk that is now embedded in virtually every market and industry.

“Climate change poses risks for financial markets as they attempt to digest climate’s impact on economic growth on society and on the global energy mix,” Mr Lacaille says.

Ross Jennings, head of sales and relationship management at RBC Wealth Management, says loose monetary policies from central banks, plus some additional fiscal stimulus, should keep most developed economies growing through 2020 and probably longer, which will continue to support growth in corporate earnings, dividends and share buybacks.

Investors should respond by having a well-balanced portfolio. “Low-interest rates mean that the search for yield becomes even more important,” he says.

Vijay Valecha, chief investment officer at Century Financial, says global stock markets enjoyed a “stellar” 2019, with the US, Europe and Asia ending the year far higher, boosted by the US Federal Reserve’s decision to cut interest rates three times over the year.

Thanks to dovish central banks, markets should do well in 2020, too.

“The Fed and European Central Bank have both indicated they will do whatever it takes to prevent a market downfall,” Mr Valecha says.

Robert Alster, head of investment services at Close Brothers Asset Management, says the US may perform better than many believe. “Its economy continues to grow at a healthy rate, underpinned by low unemployment and healthy wage growth,” he says.

President Trump will be desperate to keep the momentum going ahead of November’s presidential election.

Fawad Razaqzada,  a senior analyst at Forex.com, says optimism over the US-China trade deal is a boost for both countries but also the eurozone, whose exporters have been caught in the crossfire, seeing a sharp drop in shipments to China, the world’s second-largest economy.

“A partial trade deal should alleviate some of the growth concerns” and the focus will now turn to phase two of the trade deal, Mr Razaqzada says. “This means more lengthy, back and forth negotiations, keeping investors on their toes. The issue of intellectual property theft may prove particularly difficult to resolve.”

So this is not the end of the trade war, but it could be the beginning of the end, Mr Razaqzada adds. “The same could be said of Brexit, although perhaps it is time for the underperforming FTSE to play catch up with the rest of the world,” he says.

Nannette Hechler-Fayd’herbe, head of global economics at Credit Suisse, says we are unlikely to see a repeat of the extraordinary market performance of 2019.

“Nevertheless, we expect good results from emerging market equities, particularly in China, where technology firms trade at a large discount to their US peers,” she says.

Investors in the UAE had a disappointing year, with the market rising only 3.14 per cent in the year to November 29, according to MSCI.

The Dubai economy grew marginally, with the IMF projecting growth at 1.6 per cent this year, although rising to 2.5 per cent in 2020.

“Headwinds will persist this year and next due to lingering trade tensions, the global economic slowdown, low energy prices, Opec-led production cuts and tensions with Iran,” he says.

Despite these, Mr Zilkens says growth should pick up thanks to the ongoing fiscal stimulus measures, spending related to hosting Dubai Expo 2020, rate cuts in line with the US Fed and continuing diversification efforts.

Many private investors use government and corporate bond funds to diversify their portfolio and provide some defence against falling stock markets. Bonds pay a fixed rate of interest, which looks attractive when interest rates are falling  and therefore performed well in 2019, thanks to easing from the Fed. We could see a repeat next year.

However, do not expect much of a return from fixed-income investments, Mr Valecha warns investors.

At the time of writing, 10-year US Treasuries yield only 1.8 per cent, although he says that looks “lucrative when compared to European and Japanese bonds, where yields are in negative territory”.

Ms Hechler-Fayd’herbe says government bonds remain unattractive due to their low yields and are likely to disappoint again, except in a “recessionary risk-off environment”, which she does not anticipate. “Emerging market bonds will likely perform best,” she adds.

There were clear signs of a global property market slowdown this year, and Simon Kinnie, head of real estate pricing at the Aberdeen Standard Investments Research Institute, expects a slow 2020, too.

“After nine years of strong returns, real estate pricing is looking stretched,” he says. However, he expects “medium-term returns to be reasonable” and does not expect a crash.

“We continue to favour the Americas and European regions as a result of their stronger-than-average three-year total return forecasts,” Mr Kinnie says.

Kate Everett-Allen, partner at real estate specialists Knight Frank, tips Paris to grow faster than any other prime global market at 7 per cent in 2020, boosted by tight supply, strong demand and the Paris 2024 Summer Olympics.

Berlin and Miami should both grow around 5 per cent, followed by Geneva and Sydney at 4 per cent with Madrid, Singapore, Melbourne and Los Angeles close behind.

Ms Everett-Allen anticipates a drop of 2 per cent in Dubai but is generally bullish due to Expo 2020, which is triggering significant investment in new infrastructure such as the expansion of the metro line.

“These changes, along with the introduction of long-term visas of up to 10 years, will boost prime demand,” she says.

She expects modest falls in New York and Vancouver, amid widespread caution. “In a late-cycle, low-yield environment, prime buyers are monitoring risk carefully, many with a heavy dose of realism.”

Oil prices stabilised in 2019 at around $60 for a barrel of WTI crude and $65 for Brent, as global growth and demand held steady, despite the US-China trade war.

Those hoping for a surge next year may be disappointed, with Goldman Sachs predicting WTI at $58.50 and Brent at $63 in 2020, slightly lower than today. JP Morgan predicts $64.50 and $60 respectively.

Mr Valecha expects Brent crude prices to decline slightly to $60 in 2020, with the price underpinned by “Opec’s current stance of extending production cuts, combined with a fall in US shale oil production”.

As ever, a geopolitical shock could drive the price sharply in either direction.

The gold price rose an impressive 18 per cent this year, according to goldprice.org, boosted by economic nervousness and the Fed’s interest rate cuts.

Gold is traditionally seen as a safe haven in times of falling stock markets, but Giles Coghlan, the chief currency analyst at HYCM, says the downside is that it pays no interest. “Shares have dividends, bonds have coupons, but gold offers no such incentive for holding it.”

That is now less of an issue with the Fed and other bankers slashing interest rates, destroying the returns on cash and bonds.

The European Central Bank has cut its deposit rate to minus 0.5 per cent, while the Bank of Japan also has negative rates of minus 0.10 per cent and the Swiss National Bank has gone even further cutting to minus 0.75 per cent.

“In this environment, with the market nervous of equities and bonds offering smaller and smaller yields, gold has found its time to shine again,” Mr Coghlan says.

Recent US-China trade optimism, which could drive a global equity rally, could hit demand. “However, if the trade war continues, expect gold buyers to keep buying,” he says.

Falling interest rates could add to the impetus, as could growing investor nervousness.

That means it roughly doubled in value, although by the time you read this, its value may have lurched again.

Gary McFarlane, cryptocurrency analyst at online platform Interactive Investor, says the virtual coin has retained its appeal because none of the problems that triggered the financial crisis have been successfully addressed.

“Instead, unconventional monetary policy has stored up yet more problems as seen in the emergence of negative interest rates in some markets.”

Political uncertainty, distrust in financial institutions and social revolts around the world have further underpinned its price, Mr McFarlane says. “This further enhances Bitcoin’s appeal as a safe haven of sorts, but also as an alternative store-of-value bridging currency in the most distressed economies.”

Other uses include getting around capital controls in China, or avoiding the dollar in countries faced by US sanctions, he adds.

More than any investment, the future is impossible to predict. Bitcoin could rescale its all-time high of $20,000, or crash to $2,000. Approach with caution.