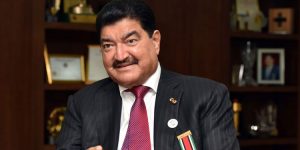 Shares of NMC Health Plc, the London-listed hospital operator that he founded, soared as much as 42% on Thursday, erasing a big chunk of their decline for the year. Another major investment for the 77-year-old Indian-born investor, financial services company Finablr Plc, is up more than 25% from its recent low, wiping out the slump since its initial public offering in May.

NMC shares surged after Reuters reported that two groups have made competing bids for a 40% stake in the company, citing people familiar with the deal. One of the groups is backed by Chinese conglomerate Fosun, Reuters said.

NMC on Thursday also reported earnings in line with analyst estimates and said it plans to buy back as much as $200 million of stock. NMC was trading 26% higher at 11 a.m. in London.

The report of interest in the NMC stake held by United Arab Emirates-based investors stung the short sellers who had been betting on a further slump in NMC shares. Speculators had been targeting the company because of its high leverage, concern about corporate governance and rising receivables.

“Investors’ primary concern with regards to NMC Health has been the huge debt lying on its balance sheet,” said Vijay Valecha, chief investment officer at Century Financial Consultancy LLC in Dubai, who has high-net-worth individuals from the Gulf among his clients. The buyback proposal comforts investors that the company “has sufficient funds at its disposal and a strong balance sheet.”

More recently, the stock was hurt by an Aug. 6 tweet from short-seller Muddy Waters Research about a new short position that the firm planned to unveil the following day. Investors speculated that NMC would be the target, pushing the shares lower. The target turned out to be Burford Capital Ltd., but the “knock-on effects of this severe move for Burford” could be hurting NMC as investors flee risk, Citigroup Inc. analyst Mathew Menezes wrote in an Aug. 7 note.

With the shares rallying, NMC may be able to avoid an ouster from the U.K.’s benchmark FTSE 100 Index. NMC was among the companies with the lowest free-float adjusted market value until Wednesday, but is now well ahead of the other potential dropouts after Thursday’s stock jump, according to data compiled by Bloomberg. The re-balancing decision will be announced Sept. 4.

Finablr, the payments processor founded by Shetty, also is having a better week. The company on Tuesday reported first-half results at the upper end of guidance, and the stock is now up 1% from its IPO price.