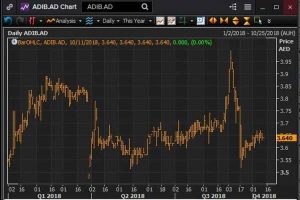 Abu Dhabi Islamic Bank (ADIB), the largest Shariah-compliant lender in Abu Dhabi raised 1 billion UAE dirhams ($272 million) through a rights issue, and the offer was five times oversubscribed, the bank said in a statement to the Abu Dhabi Securities Exchange.

“Subscription for the AED 1 billion ADIB Rights Issue was completed on 9 October and generated investor demand in excess of 5 billion AED, reflecting the support and faith of the bank’s shareholders’ in ADIB’s growth strategy and value,” the statement said.
The rights offered the opportunity to purchase shares at a price of 2.16 UAE dirham per share for existing shareholders and other investors.

The statement added that the bank’s capital raising plan also included “raising $750 million of additional Tier 1 capital through a perpetual sukuk”. The issue was three times oversubscribed and priced at a profit rate of 7.125 percent, accumulating $2.1 billion in orders.

ADIB, with more than 122 billion dirhams in assets, has recorded a 2.19 percent increase in its stock price since the start of the year on the Abu Dhabi Securities Exchange, as most United Arab Emirates banks have been boosting their indices during 2018.

The bank recorded a 3.8 percent rise in second quarter net profit to 572.7 million UAE dirham. Investors are awaiting the bank to release its third quarter earnings results later in October.

According to data from Eikon, one analyst gave a ‘buy’ rating on the company’s stock, two analysts gave a ‘hold’ rating.

“The recent announcement of a 50 billion dirham [$13.6 bilion] stimulus announcement from Abu Dhabi Federal Government has significantly improved the macroeconomic scenario of UAE. Also, the rise of one year EIBOR rates from 2.60 percent in the start of 2018 to 3.44 percent currently can aid the bank in expansion of its Net Interest Margin.”

On Thursday, ADIB’s shares retreated 0.27 percent, in line with a 0.93 percent drop for the Abu Dhabi stock market index.

The bank’s stock price was last trading near 3.63 dirhams.

Valecha added that the bank’s management said that “they will be able to grow revenues by 18 percent from 2017 level.”

“Right now, the company is trading at approximately 6.12 times 2017 calendar year profits of 1985 million dirhams. Given the attractive capital profile of the bank, we believe shares deserve a higher multiple and they can rally by 30 percent from current level of 3.63 dirhams to 4.71 dirhams,” he added.

Elsewhere in the region, stock markets mostly tracked a drop in global markets overnight and early on Thursday.