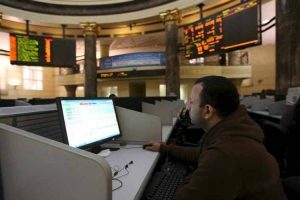 Egypt’s stock market dropped the most among its peers, following a retreat in emerging markets

Middle Eastern markets were caught up in a sharp global sell-off last month, as investors reacted to the decision by the International Monetary Fund (IMF) to cut its global growth forecast by 0.2 percent to 3.7 percent, as concerns grow over the impact of trade tensions between the United States and its trade partners.

The MSCI World index witnessed its biggest drop since mid-2012, falling 7.5 percent during the month. While Egypt was hit hard by heavy local institutional selling, the opposite was the case in Saudi Arabia – the region’s biggest market – as local buyers stepped in to ease the impact from the global backlash felt as a result of the crisis over the killing of journalist Jamal Khashoggi in the Saudi consulate in Istanbul.

Egypt’s blue chip index EGX30 was the worst performer in the region during the month of October, dropping 9.35 percent. The index has now dropped more than 12 percent since the start of the year.
The sharp drop in the Egyptian shares is mirroring weakness in emerging marketsas MSCI’s index of emerging market stocks is now down 13.44 percent for the year and dropped more than 8 percent in October.

“The market dropped to 52 week low towards the end of the month on heavy local institutional selling,” Mohamad Al Hajj, an equities strategist at EFG Hermes, told Zawya by email.

“Western accounts were net buyers as valuations are very attractive after recent sell-off (one of the cheapest in the Emerging Markets space),” Al Hajj ended.

“We expect the weakness in the stock market to continue in the short-term. Nevertheless, the long-term bull market in Egyptian shares is still intact,” Vijay Valecha, chief market analyst at Century Financial Brokers, told Zawya by email.

Saudi Arabia’s index dropped 1.16 percent during the month, as an 8.76 percent drop in Brent oil prices weighed on the Saudi market last month.

“The Saudi market witnessed significant volatility during October-18, influenced by weakness in global equity markets [and] further affected by regional geopolitical factors as well as heightened speculation in the market,” KAMCO Research said in its latest GCC markets monthly report.

Data from the Saudi exchange showed that foreign investors were net sellers of Saudi equities during most of October.

“Saudi market was unusually volatile in October, especially intraday, with record selling by QFIs (Qualified Foreign Investors) and through swaps by foreigners, which was being offset by record buying from domestic DPMs (Discretionary Portfolio Managers) and GREs (Government Related Entities),” Nishit Lakhotia, head of research at SICO bank, told Zawya by email.

“However, for the month, [the] Saudi market was only 1.2 percent down thanks to the domestic institutional buying. Such aggressive buying and selling also boosted the overall turnover in Saudi market during October.”

According to the monthly Reuters poll, twenty-three percent of the participants expect to raise their allocations to Saudi equities in the next three months and the same proportion expects to reduce them.

“Going forward, we believe Saudi Arabia volatility to come down. This is an opportune time to do some stock picking in Saudi market as recent domestic buying support was concentrated in few names only, so there are opportunities to develop positions into specific stocks that are now trading at lower multiples. We are optimist on Saudi market in the near term,” Lakhotia added.

Dubai’s index fell 1.78 percent, while the index in neighbouring Abu Dhabi dropped 0.68 percent. The real estate sector was a drag to the Abu Dhabi stock market during the month. According to the KAMCO report, the real estate index fell by 4.2 percent month-on-month in October, with Aldar Properties dropping close to 5 percent.

While in Dubai, KAMCO’s report said financial and investment services was the worst performing index, with the sector plunged by 11 percent month-on-month in October-18, driven by declines in its biggest stocks Dubai Investment (down 13.4 percent) and the Dubai Financial Market (down 5.4 percent).

“Within UAE, both Dubai and Abu Dhabi were weak in October led by selling pressure in ENBD (Emirates NBD), Emaar development going ex-dividend and underperformance by Dubai Investments. While in Abu Dhabi FAB (First Abu Dhabi Bank) weighed on the index performance, as we expected,” Lakhotia said.

“Within UAE, we expect the market to show strength led by high yielding names, particularly in Dubai. Accordingly, one can slowly build up positions in Dubai… while Abu Dhabi’s market may still be a drag as we believe FAB may continue to underperform in the near term due to earlier run up in the stock.”

Elsewhere in the region, Qatar’s index ended the month in positive territory and was the best performing bourse among its peer markets in the GCC, rising 4.97 percent. Qatar National Bank was the most traded stock in terms of value, followed by Industries Qatar and Qatar Fuel. Across the region, Bahrain’s index dropped 1.78 percent, Kuwait’s premier market index fell 2.05 percent and Oman’s index dropped 2.66 percent.