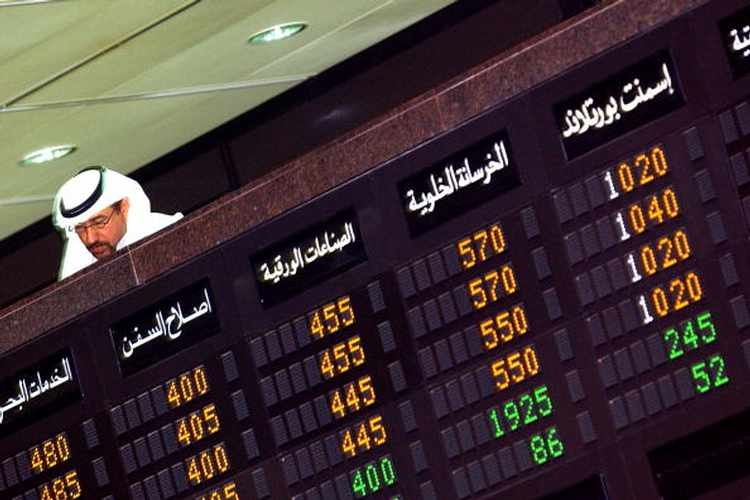 Investors in the Middle East were mostly cautious during the month of March, reflecting the calmness in global markets following a rally at the beginning of the year.

Trade talks between the United States and China were the main focus for investors, as positive or negative news on the progress in talks remains as the main factor moving global markets.

At the end of March, Brent oil prices were trading near $68 per barrel.

“National Bank of Kuwait, which has the highest weightage in the index at 17 percent, is up almost 17.5 percent YTD (year-to-date) with Kuwait Finance House (second largest constituent) increasing by 17 percent YTD,” Khairajani said.

Kuwait’s premier market index has gained 13.66 percent in the first three months of the current year, after finishing 2018 9.94 percent higher.

The Saudi index was the second-best performer in the region in March, just behind Kuwait’s premier market index, with Tadawul gaining 3.85 percent.

The banking sector was the main boost for the market, with Al Rajhi, National Commercial Bank and Samba gaining 7.97 percent, 5.57 percent and 6.72 percent respectively.

“The first inclusion of FTSE happened mid-March and was the key trigger for index gains despite modest-to-weak 4Q earnings as foreigners continue to be net buyers targeting blue chips stocks,” Nishit Lakhotia, head of research as Bahrain-based bank SICO, told Zawya by email.

The first tranche out of five from the Saudi market inclusion in the FTSE Emerging All Cap Index took place on March 18. Tadawul will also join the closely- followed MSCI emerging market index in May 2019.

“Turnover in the index recovered 25 percent month-on-month, but still remains below $800 million. With (a) more significant inclusion event in the coming months, turnover should likely improve,” Lakhotia added.

“While April will be 1Q (first quarter) results time, the index will continue to be affected more by the speculation regarding flows in (the) near term than earnings,” he said, adding that he expected the current momentum to be sustained at least until early May.

Lakhotia said that UAE markets were relatively weak in March. “Looking ahead, we see limited trigger(s) in the UAE index during April other than how 1Q earnings season plays out,” he added.

In Dubai, Aramex was one of the main gainers. Its stock climbed 7.97 percent during the month as the company announced that Australia Post Transaction Services sold its 10 percent stake in the firm for 602.6 million dirhams ($164.1 million), opening up the possibility for new foreign investors to buy into the company.

“Most stocks closed in the red in the index (real estate), led by Emaar Properties (-2.5%), as sector outlook continues to remain challenging,” the report said.

The Abu Dhabi index was one of the worst performers in the region in March. The investment and financial services sector dropped 11.7 percent during the month, according to data from Kamco Research, while the banking sector fell 1.1 percent.

However the firm noted that “trading activity on the exchanged picked up m-o-m in March 2019, as volumes traded improved by 27.4 percent to 1.25 billion shares”. It also said the value of stocks traded improved marginally by 3.3 percent month-on-month to 4.3 billion dirhams.

Lakhotia said that the “majority (of) stocks in Abu Dhabi were weak in March, partially affected by (the) dividend season.”

The Qatari market started the month on the back foot, dropping 3.27 percent during the first week, but rallied in the last week to end the month mainly flat, or 0.04 percent lower.

Qatar Fuel Company (Woqod) and Mesaieed Petrochemical Holding are both eligible for MSCI’s emerging market index inclusion in May. Arqaam Capital said that it expects passive inflows of $240 million and $230 million respectively on the two stocks as a result of the inclusion.

“Q1 results will now be in focus to see if these can justify current market levels,” Khan ended.

Egypt’s blue-chip index EGX30 dropped 0.45 percent in March, despite a rally of 1.27 percent during the first two weeks.

Vijay Valecha, chief market analyst at Century Financial blamed a correction at the end of the month for an overall decline in emerging market equities, which also led to a “decline in Egyptian blue chips, including (the) highest-weighted CIB (Commercial International Bank) stock”.

The MSCI Emerging Market index gained 0.68 percent in March, data from Eikon shows, following an 8.73 percent surge in January. Overall, the index closed 9.54 percent higher in the first quarter of 2019, Eikon data showed. CIB, which is Egypt’s largest lender, has witnessed a 12.57 percent increase in value during the first quarter, but in March saw its shares decline by 2.59 percent.

“Last week’s net flows report for the country further indicate a net outflow of approximately $10.4 million with $11.5 million outflow from bond and $1.1 million inflows (into the) equity space,” Valecha added.

Despite the slight retreat in March, EGX30 has gained 15.35 percent during the first quarter of the year. The strong momentum in Egyptian stocks in 2019 has been fuelled by the Central Bank of Egypt’s (CBE) decision to cut its overnight interest rates in mid-February for the first time since March 2018. (Read more here).

“The Egyptian pound has been under some pressure towards the end of the month, with the U.S. Fed holding rates steady,” Iyad Abu Hweij, managing director of Allied Investment Partners, told Zawya by email.

The U.S. Federal Reserve kept interest rates steady in March following a two-day meeting and signalled that there would be no further interest rate hikes this year.

“The ECB will likely be looking to absorb additional global data before determining when the next anticipated cut in rates should happen,” Abu Hweij added.

“Foreign selling has been a common theme in the market during the month, with investors setting their sights to other regional markets. In the next couple of weeks, we expect the Egyptian market to remain horizontal until a trigger event occurs,” he ended

Muscat’s stock market was the worst0hit among its peers in the region, dropping 3.88 percent.

The country’s benchmark reached a new record low in March, dropping below the 4,000 level, to end the month at the 3,983 level.

Omantel was the worst performer on the exchange, dropping 12.57 percent, while Oman Cement declined by 12.11.

“Trading activity once again declined during the month after improving in the previous month. Monthly value traded declined by 12.5 percent to reach OMR 45.3 million ($117.8 million) as compared to OMR 51.8 million in February 2019,” Kamco Research’s report said.

“Monthly volume traded also declined but at a higher rate of 22.4 percent to reach 310.8 million shares in March 2019, as compared to 400.7 million shares during the previous month,” it added.

Oman’s Capital Markets Authority issued a new commercial companies law in the second week of March. Under the law, all matters related to listed companies will come under the CMA’s jurisdiction. The law came into effect on April 1. (Read more here)

Bahrain’s stock market was mainly flat, adding 0.05 percent, following two straight months of gains. The market index has increased by 5.69 percent in the first quarter of the year.

Ahli United Bank rose 7.99 percent during the month, helping the country’s stock market index to finish flat and offsetting a retreat in other constituents of the index.

The Services index was the worst-performing sector according to Kamco Research, dropping 2.8 percent, mainly driven by the 4.3 percent decline in Bahrain Telecommunications Company’s (Batelco) share price.