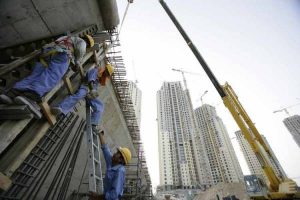 UAE produces up to 41 million tonnes of cement, while domestic demand stands at 21 million

Dubai: The UAE construction industry is expected to flourish in the coming period, which could boost cement producers in the GCC country and push up demand.

The rise in oil prices will also catalyse cement companies in the GCC, particularly in the UAE, analysts and economists told Mubasher.

According to Reuters, the UAE produces up to 41 million tonnes of cement, while domestic demand stands at 21 million, which poses oversupply as a major challenge facing the industry.

The sector witnesses a tough competition urges companies to keep their prices at competitive levels compel them to absorb any increase in energy costs, Valecha said.

Over 50% of the UAE’s cement production is exported to neighbouring countries including Oman and Egypt, along with a group of African countries, the analyst revealed.

In 2017, the majority of the UAE’s cement producers reported declines in net profits, on top of which was RAK Cement, whose total loss registered AED 21.3 million.