Khaleej Times – What’s next for Russia after the World Cup? 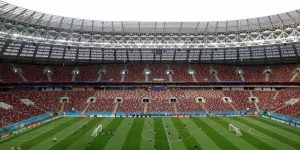 Nation spends billions for event – and while it won’t turn a profit, it sees it as a long-term investment

The year was 2008. Moscow’s Luzhniki Stadium was the venue for Europe club football’s most prestigious event, the Champions League final. Two months later, Guss Hiddink guided Russia’s national team to the Euro 2008 semi-finals – its first major football milestone since the breakup of the USSR.

Amid the excitement, Vladimir Putin, who’s not even a football fan, bid to host the 2018 Fifa World Cup. Largely seen as a political gambit, this move was ultimately geared towards cementing Russia’s place as a modern superpower alongside the United States and China.

This was indeed a strange move for a country that has little interest in the sport. But a year down the line, Fifa settled on Russia as the host of the 2018 World Cup.

As much as this came as a surprise to many, Russia’s ability to host the world’s most-watched tournament was, however, not in doubt. Clearly, the surprises did not stop there; Russia’s national team also proved that they are a football force in their own right after reaching the 2018 Fifa World Cup quarter-finals. Right from the opening ceremony and official tournament kick-off, the 2018 Fifa World Cup has been a smooth one. Again, no surprises here especially if Russia’s track record at hosting world events is anything to go by.

Their last successful world event was the 2014 Winter Olympics in Sochi. For this occasion Russia had bet the farm, spending nearly $50 billion, making it the costliest Olympics ever.

Hosting the Fifa World Cup is an expensive affair. Despite being a footballing nation, Brazil ended up spending a whopping $12 billion to host the 2014 Fifa World Cup. That’s more than the total valuation of Manchester United, Barcelona and Real Madrid put together, just for a month-long event. The 2018 Fifa World Cup in Russia is on track to be the most expensive tournament ever.

Some 12 stadiums spread over 11 cities are currently being used at this year’s World Cup. Nine of these were specifically built for the event – all at a total cost of $13 billion. Thirty percent of the total budget was spent on the construction of sports infrastructure while 50 percent went towards transport improvement. The rest of the money has been channeled towards other support activities.

When it comes to world events, initial timelines and budgets can be very misleading. This year’s World Cup is no different. The Krestovsky stadium in St Petersburg was completed eight years behind schedule. It also went over budget by a staggering 540 percent, making it one of the most expensive stadiums ever built. And that is just the tip of the iceberg.

Apart from escalating costs, there is another problem with these mammoth structures. They add a huge financial burden on the host cities; all 11 of them are either getting a brand-new stadium or having an existing one refurbished, even though several host cities don’t even have clubs that play in Russia’s top-flight football league.

Four host cities – Volgograd, Kaliningrad, Nizhny Novgorod and Samara – have teams in Russia’s second tier, which regularly draws crowds in the range of 1,000 to 5,000 spectators. Sochi doesn’t even have a professional football team. According to an estimate, the future operating cost for these massive World Cup stadiums in Russia will exceed $32 million annually.

What does Russia stand to gain? Well, if ticket sales are anything to go by, the 2018 Fifa World Cup will attract about a million international tourists. This will create temporary employment across several sectors of the economy.

Cafes, bars, restaurants and hotels continue to fill fast as the tournament approaches its final stretch. Kalachs, chudu and pyshki have also been flying off the plates as football diehards throng eating joints in large numbers to reenergize.

Financial data from previous World Cups shows that sports fans that travel to support their national teams spend up to twice as much money than usual tourists. The overall cash inflow might amount to $2.5 billion to $4 billion, giving the Russian rouble a slight advantage.

Historically, host nations see an appreciation of around 2.87 percent against the dollar from June to August – a paltry sum considering the overall investment and the fact that the effect will run dry almost immediately after the whistle blows on the final match.

To be fair, Russia admits that it will not turn a profit as a host. This is more of a long-term investment in a game that they have struggled to master and one that has mass international appeal. Is that sufficient to offset the astronomical economic costs? For Russia, no. But for Putin, maybe.

Make no mistake, this is going to be Putin’s World Cup and the concoction of politics and sports is going to be electrifying. Two recent acts of war, an economic decline and an alleged interference in the US elections and most recently the poisoning of an ex-Russian spy in southern England has attracted global condemnation. A successful World Cup will help paper over some cracks, but one thing is for sure when the party ends, the grumblings will continue.

Fun fact: Lev Yashin, the legendary Russian goalkeeper who played in the 1958 and 1970 World Cups, is still the only keeper to win the Ballon d’Or.

The writer is head of investments and advisory for financial markets at Century Financial Brokers.