Is Roku’s share price a ‘buy’ amid streaming boom? 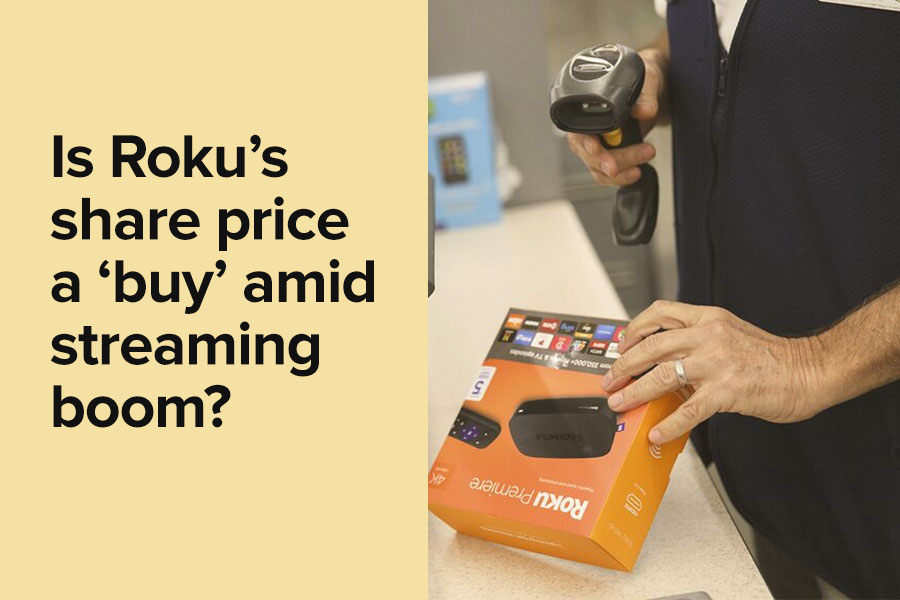 It’s been a wild ride for Roku’s [ROKU] share price investors so far in 2020. The streaming platform’s share price started the year at $135, before hitting $149 in mid-February.

The double edged-sword of pandemic restrictions, on the one hand, may help boost Roku’s viewing figures, but at the same time may dampen the company’s ad revenue. These factors, and many more, will likely weigh on its share price when the platform announces its Q1 earnings on 7 May. 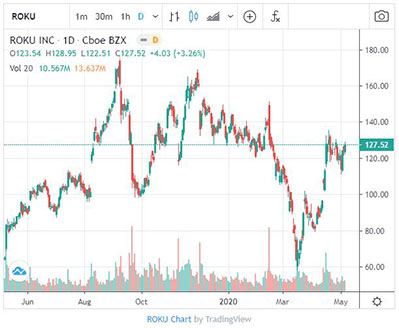 Two sides to the story

On 14 April, Roku said that streaming hours has increased by almost 50% on its platform in the first quarter, thanks to stay-at-home orders intended to reduce the spread of the pandemic. The company raised its revenue guidance for this period from $300m to $310m to $307m to $317m.

More people stuck at home means more eyeballs for streaming platforms — but on the flipside, ad revenue is falling from businesses these viewers might otherwise be frequenting.

As the US economy gets moving, these businesses will start advertising again, but many viewers may want to do something other than watch yet more digital content when lockdown restrictions are relaxed.

The fact that Roku is a platform rather than a major producer of content like means it may struggle to increase user engagement, especially with social distancing measures putting a lot of content production on hold.

Is Roku already too expensive?

Zacks Equity Research expects the company’s first-quarter results to reveal a year-on-year fall in earnings and a quarterly loss of $0.45 per share, a more than fourfold increase over the same period in 2019. The firm also notes that consensus EPS estimates for the quarter have been revised 46% lower over the last 30 days. Revenues, however, are predicted to be up 43.5% to hit $297m.

On 28 April, Michael Morris, an analyst at Guggenheim downgraded the stock to neutral from buy, maintaining a price target of $120. He noted that Roku was trading at 53 times revenue estimates for 2023 and 16.6 times annual platform average revenue per user.

“Our view of the company’s high utility for consumers and advertisers and secular growth opportunity remain unchanged,” he wrote, although Morris also observed that investors were expected to view the company as a secular winner.

Earlier this month, Oppenheimer analyst Jason Helfstein cut Roku’s share price target from $165 to $110 on the basis that he now forecasts Q2 ad platform growth of around 18% year-on-year — a third of the previous 62% estimate.

However, technology stock analyst Beth Kindig thinks that based on its financials and positioning, any weakness in Roku’s price will probably be temporary given that connected TV ads are in a growth trend while mobile is reaching saturation.

She notes that the company is more diversified than many of its peers and collects a seven-figure sum for allowing a brand to take over its home screen as well as a dollar for every Roku sold with a Netflix quick-launch button. Kindig says that every new market Roku expands into and every unit sold helps diversify the company from varying levels of ad demand.

Is Roku set to surprise?

While Zacks had estimate that Roku would post a loss of $0.14 per share in Q4 2019, when it came to its earnings report the company surprised with a loss of $0.13. The company has beaten consensus EPS estimates for each of the last four quarters.

On 29 April, Benchmark equity research analyst, Daniel Kurnos, initiated coverage of the stock with a buy rating and $153 share price target. His theory is that the company will be a significant beneficiary of any recovery in the cost of ad impressions and could continue to benefit from subscription video-on-demand channel growth and significantly lower unsubscribe exposure due to its free price tag.

The Wall Street analysts rating summary for Roku over the last 30 days is bullish, with 15 of the 21 analysts recommending it as a buy, and just two labelling it a sell.