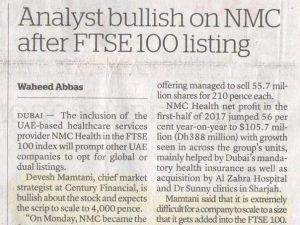 The UAE-based healthcare services provider NMC Health, which is listed on the London Stock Exchange, inclusion in the FTSE 100 index will prompt other UAE companies as well to opt for global or dual listings.

Devesh Mamtani, chief market strategist at Dubai-based Century Financial, is bullish about the stock and expects the scrip to scale to 4,000 pence.

On Monday, NMC became the “first UAE based company to be a part of FTSE 100 and we hope to see many companies to grow to such achievements globally,” says Devesh Mamtani, chief market strategist at Dubai-based Century Financial.

Listed in April 2012, the healthcare company’s shares were trading marginally down at 2,747 pence on Tuesday evening after hitting the day’s high of 2,781. In September 2016, the stock was trading 1,425. The firm through its initial public offering managed to sell 55.7 million shares for 210 pence each.

NMC Health net profit in the first-half of 2017 jumped 56 per cent year-on-year to $105.7 million (Dh388 million) with growth seen in across the group’s units, mainly helped by Dubai’s mandatory health insurance as well as acquisition by Al Zahra Hospital and Dr Sunny clinics in Sharjah.

Mamtani said that it is extremely difficult for a company to scale to a size that it gets added into the FTSE 100. “NMC Health has been on the growth curve ever since it’s listing since 2012. We expect the stock to continue doing well and we have been bullish on it since a long time,” he said, adding that the stock has shown returns of more than 80 per cent this year alone and he expects the stock to scale to a target price of 4,000.

The FTSE index lists top 100 companies on the LSE with the highest market capitalisation. NMC’s market cap was at Dh26 billion.