Khaleej Times – Gold gets sheen back, seen to glow even brighter in H2 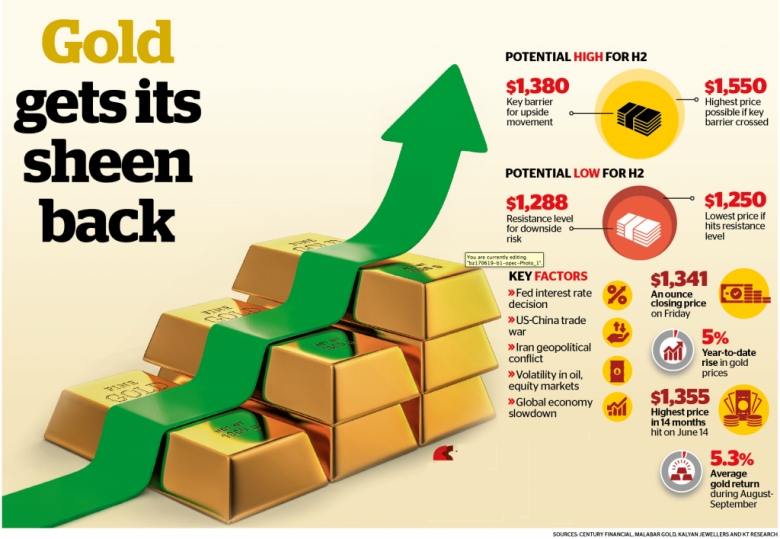 Gold prices are biased towards the upside due to ongoing US-China trade tensions, the Iran crisis and strong demand expected from festivals during the second half of 2019, industry analysts and executives say.

Gold prices eased after hitting a 14-month high of $1,355 on June 14 as intensifying political concerns in parts of the Middle East and weak data from China and the US pushed the metal higher. The yellow metal has gained nearly 5 per cent year-to-date as it was closed at $1,278 on December 31, 2018.

“The metal faces first major resistance at the recent 14-month high of $1,380, a move above that could open up doors to $1,475 level followed by $1,550 level. On the downside, the previous resistance break-out around the $1,288 region will now act as a strong support which if breached would expose the metal to $1,250 level,” said Vijay Valecha, chief market analyst at Century Financial.

He said concerns of a global slowdown due to an escalating trade war, crisis in parts of the Middle East, recent stock market volatility and declining bond yields paint a positive fundamental picture for gold in the latter part of the year.

Abdul Salam K.P., group executive director at Malabar Group, says gold works as an ideal hedge against uncontrolled market factors as they are facing some uncertainty these days due to global political and trade worries.

“Gold market growth has been positive so far this year compared to last year and we do expect the trend to keep going in the second half,” he said. T.S. Kalyanaraman, chairman and managing director of Kalyan Jewellers, sees gold prices will go up in the second half of the year.

Kalyanaraman said there was a time when seasonal demand for gold was the only reason for price fluctuations, but today it has become increasingly difficult to predict gold prices. “Various global factors along with demand during the wedding season starting from September will play a role in pricing,” he said.

Valecha said the chances of a Federal Reserve interest rate cut have dramatically increased in the past month as markets price in a further fallout from the US-China trade deal collapse.

“With the recent bunch of disappointing data, the market consensus is now clearly pricing in a bare minimum of two rates cuts this year. This will keep the interest rates and dollar under pressure which is supportive for the non-yielding dollar-denominated bullion,” Valecha added.

He further said that global inflation is subdued as commodities like oil have declined and this is good for the yellow metal since it is a non-interest-bearing asset.

The second half of the year has generally been seasonally positive for the asset as various festivities, including Diwali, the Indian wedding season and Christmas, tend to result in increased demand, Valecha added.

“For the past 20 years, since 1988, the average returns in gold has been 5.3 per cent between August-December. Jewellery-makers and wholesalers tend to stock up on gold prior to these occasions, and push up gold prices in the process,” he said.

Abdul Salam noted that currently, the trend among buyers is that they demand more lightweight and multi-use jewellery, which can be used on multiple occasions and is subtle and sophisticated. “Bulky statement-piece jewellery is in high demand for wedding purposes. Besides this, the major growth is in the demand for solitaires and diamond jewellery,” he said.

He said residents have become well-accustomed to the 5 per cent value-added tax factor now and the initial drop in sales post-VAT introduction has picked up its momentum and the sales graph is going uphill again. And the VAT refund scheme for tourists, implemented last year, has brought back visitors in large numbers to jewellery stores.