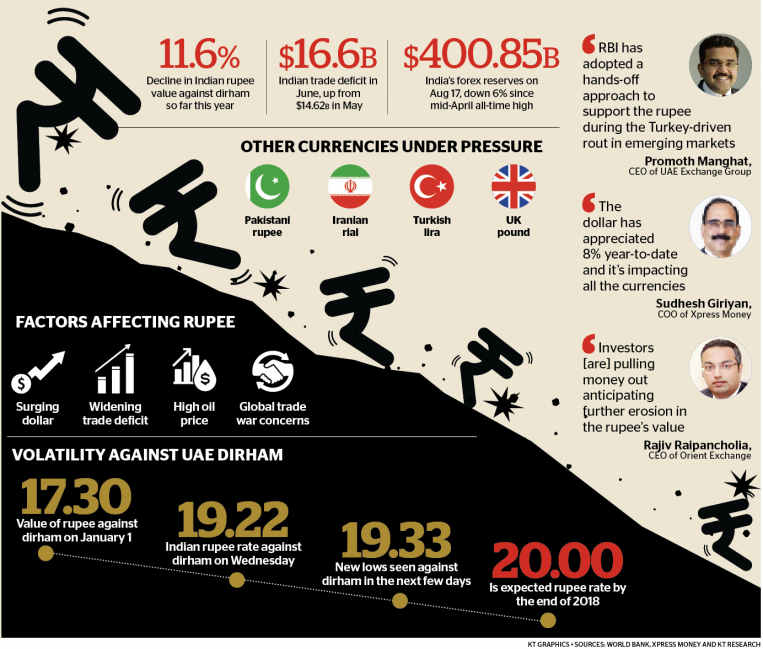 The rupee has lost 11.6 per cent against the dirham year-to-date.

The Indian rupee continued its downward trend, hitting another record low of D19.22 against the UAE dirham on Wednesday due to the strengthening of the US dollar and the currencies pegged to it.

Analysts attribute the rupee’s fall mainly due to India’s widening trade deficit and the greenback’s persistent strengthening against emerging market currencies such as the Pakistani rupee, British pound, Iranian rial and Turkish lira, among others.

The rupee has lost 11.6 per cent against the dirham year-to-date.

Sudhesh Giriyan, COO of Xpress Money, believes that the downward trend will continue as the dollar is projected to strengthen further in the coming months. Hence, the rupee hitting 19.33 in the next few days is almost certain. The Indian currency hitting the 20 level by the end of the year against the dirham cannot be ruled out.

He said a widening trade deficit, surging dollar, high oil prices and global trade issues are some of the worries that are causing the rupee’s weakness. However, Wednesday’s drop is also attributed to the dollar’s strengthening following the US-Mexico trade deal that also pushed US equity markets higher.

“The dollar has appreciated 8 per cent year-to-date and it’s impacting all the currencies. There were predictions that the rupee should see a correction from 68.9 but now it has reached 70.55,” he said.

Promoth Manghat, CEO of UAE Exchange Group, said the Reserve Bank of India has adopted a hands-off approach to support the rupee during the Turkey-driven rout in emerging markets.

“We did see some signs of RBI intervention, when the rupee touched 70.40 and 70.50 against the dollar but it was not aggressive. Month-end oil demand added to the pressure on depreciation. We did witness a good spike in remittance, when the rupee touched 70 for the first time. Meanwhile, we have observed remittances settling back to normalcy. As for the future, we sense rupee going down further to 72-73 [19.6-20 versus the dirham] by year-end,” he added.

Forex officials at local banks in India said the central bank sold dollars in small amounts as RBI was not trying to protect any level unlike when the rupee was at 69 and it was trying protect that. India’s trade deficit hit $16.6 billion in June, up from $14.6 billion in May, while forex reserves slumped to $400.85 billion on August 17, a 6 per cent drop since mid-April.

“High month-end demand from oil-refining companies and importers also contributed to the downfall. Last month, the gap between Indian exports and imports touched $18 billion against expectations of $15.7 billion and the current account deficit is forecast to reach 2.8 per cent in 2018-19,” Valecha said.

He stated that India’s government seems unconcerned as some of its officials expressed an opinion that the currency should be allowed to find its natural level.

Valecha feels the rupee’s fall will continue due to geopolitical concerns and monetary divergence between the RBI and the US Federal Reserve.

“The Indian rupee rate is likely to reach 19.90 against the dirham in the next three months. The impact of depreciation on Indian equities is likely to be negative as foreign institutional investors will try to liquidate their rupee assets and convert them into US dollar instruments,” he added.

“Sharp and unanticipated currency depreciation encourages nervous foreign investors to take money out of the country rather than bring more in. Between April and June, foreign investors pulled $9 billion out of Indian stock and bond markets. As the rupee crossed the critical threshold of 70, capital flight has intensified. Investors pull money out anticipating further erosion in the rupee’s value,” said Raipancholia.