Khaleej Times – Modi’s win to power Indian rupee, but may retreat in late-2019 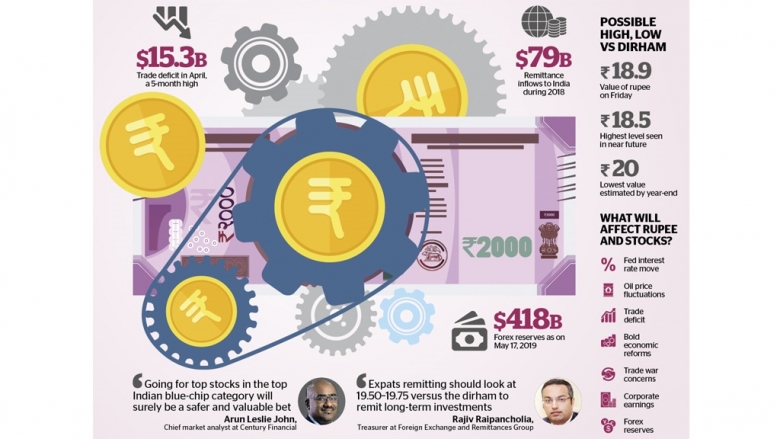 Currency set to gain strength in post-election trade, but may shed some value in late-2019.

The Indian rupee is seen to strengthen in the near future due to increased foreign funds inflow expected, following the massive victory of the BJP party in the elections, but analysts expect that the currency could touch 20 versus the UAE dirham by the end of 2019 due to a trade deficit, poor earnings and other global concerns.

Analysts expect the rupee to trade between 18.50 to 19.75 against the dirham during the remainder of the year with interest rate moves from the Reserve Bank of India and US Federal Reserve, global trade war concerns and oil prices seen to dictate the Indian currency and equity markets.

“With respect to the second half of 2019, the dirham-rupee pair is likely to stay neutral to bullish with an overall range target of 18.50 to 19.75 levels. Technically, the pair is trapped in a descending channel with current levels close to the upper-channel resistance line zone of 19.25. Any sharp breakout from this level will further put pressure on the rupee,” said Arun Leslie John, chief market analyst at Century Financial.

The rupee hit 20.20 against the dirham last October but has recovered since and is currently trading near 18.90 levels. Most of these gains are attributable to sharp inflows that Indian stock markets received this year, as well the unexpected RBI rate cuts.

Rajiv Raipancholia, treasurer at Foreign Exchange and Remittances Group and CEO of Orient Exchange, sees the rupee appreciating in the next couple of weeks. But looking at the fundamentals, depreciation is expected by year-end.

“We can look at the rupee touching 20 per dirham by year-end,” he added.

He said an increasing trade deficit, a slowdown in foreign institutional investor inflow, poor corporate earnings and increased crude prices are some of the factors that will depress the currency in the coming months.

“Interest rates are still high for deposits at around 7 per cent. Indian expatriates remitting funds back home should look at 19.50-19.75 versus the dirham to remit long-term investments, which would be a reasonably good rate,” Raipancholia said, adding that remittances grow between 4 to 8 per cent before and during Eid.

Antony Jos, executive director at Joyalukkas Exchange, noted that the Indian currency could get stronger temporarily as the election results are out.

“Narendra Modi stormed to a second term with a record mandate. But there are other global economic factors that also influence the Indian rupee, like a trade account deficit, Fed rates, oil price, Brexit and the trade war tensions,” said Jos.

Promoth Manghat, group CEO at Finablr, said the electoral win of Modi will significantly enhance investor confidence and should reflect in gains for the rupee.

“The resounding mandate points to a stable government, which will be able to ensure continuance of ongoing reform measures and unhindered policy decisions,” Manghat said.

Going ahead, John noted that with most of the gains for the rupee already factored in after the ruling NDA alliance returning to power, chances are that the pair will track global macro correlation with its peers and the overall dollar strength in markets as of now.

With the euphoria around the Indian elections coming to an end, NRIs are advised to cherry-pick and look for value-based stocks of companies that have sound fundamentals and are a good value pick.

“Going out for top stocks in the top Indian blue-chip category will surely be a safer and valuable bet. Other strategy would be to look out for names that have been laggards for the last five years, but which have good value fundamentals [such as SBI, L&T, Hero Motor, which have rallied by an average of only 20 to 25 per cent against a blue-chip average rise of more than 75 per cent], John said.

He noted that after successfully passing major bills like the Goods and Services Tax and announcing drastic measures like demonetisation, markets are increasingly betting on the fact that with absolute the majority on hand, chances of further bold and meaningful reforms are likely more than ever.

Going ahead in the second half of 2019, the Nifty is expected to trade with a neutral to positive bias in the average range of 11,400 to 12,600 points with an upside bias, John added.