Khaleej Times – Why having Aadhar, PAN card is a must for NRIs 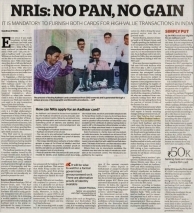 Ever since it was made mandatory to link your Aadhaar card with your PAN card from July 1, 2017, NRIs in the UAE were confused on whether they need a PAN card – yes, you do – and an Aadhaar card – yes, again. Without an Aadhaar card, you may not be able to file your income tax. However, most NRIs were happy since they do not fall into the bracket of filing tax returns. However, let us look at those NRIs who have properties, buy shares and gold for investment purpose and make considerable income in India.

V. Nagarajan, a Chennai-based property consultant, explains that the “mandatory linking of the PAN-Aadhaar cards” rule does apply to NRIs. However, a PAN card is becoming absolutely necessary for conducting banking/hospital transaction above ?50,000 or other sale transactions in India. It is also necessary to quote your PAN card number if you need to do any transaction above ?200,000 in India.

The Permanent Account Number, commonly known as the PAN card, is a 10-digit alphanumeric number issued by the Income Tax Department of India. PAN is obligatory for a large number of financial transactions such as salary or business/professional income, sale or purchase of assets (like property, jewellery, etc.) above specified limits, to buy mutual funds/shares, open bank accounts, etc.

The PAN card in its present form has been around from 1995 and is applicable for all individuals and businesses having taxable income, including foreign nationals/entities having financial transactions in India.

The Aadhaar number is a 12-digit random number issued by the Unique Identification Authority of India (UIDAI) to residents of India. The process of issuing Aadhaar commenced from 2012 onwards and is generated through a unique process of demographic and biometric procedures. Aadhaar is applicable to only residents of India and NRIs are not mandatorily required to possess the card.

Krishnan Ramachandran, CEO of Barjeel Geojit, said: “The Aadhaar is becoming the primary source of identification [like the Emirates ID] and is being gradually integrated into all economic spheres of activity. Be it obtaining a mobile number or to avail of government benefits/subsidy, the Aadhaar card is the prime requirement for many a transaction. Recently, the government has announced the linking of PAN cards with Aadhaar. This means that while filing income tax returns in India, apart from giving PAN card details, the assessee is also required to furnish his Aadhaar number.”

Though NRIs are not mandatorily required to possess a PAN card, it is advisable for all those who have or are likely to have in the near future taxable income in India. Moreover, in India, it is mandatory to quote PAN in all documents pertaining to financial transactions, for instance purchase and sale of shares and mutual fund schemes.

“I am interacting with a number of developers across south Indian cities such as Bengaluru, Chennai and Hyderabad. The consensus is that without a PAN card, it is becoming increasingly difficult to do a banking transaction if the amount exceeds ?50,000 – either deposit or withdrawal or property-related transaction of buying and selling. It will be difficult to register property as registration authorities do not entertain applications without proper KYC [know your customer] documents as proof of identity. In India, the registrar insists submission of a PAN card copy for any sale or buying transactions,” added Nagarajan.

Key investment sectors in the Indian economy now demand greater transparency after the ambitious reform measures adopted by the Narendra Modi government such as the Goods and Services Tax and demonetisation in a bid to bring the unorganised sector into the organised trade.

It has now become mandatory to link your PAN with Aadhaar with effect from July 1, 2017, as per the income tax laws. However, the government has exempted certain class of individuals from linking these two documents subject to certain conditions. Even before the Supreme Court judgement was announced upholding the legality of section 139AA, the Central Board of Direct Taxes (CBDT) had, in its notification dated May 11, 2017, clarified the categories of individuals who are exempted from compulsorily linking their PAN with Aadhaar by exempting them from the purview of Section 139AA of the Income Tax Act.

He says: “It is advisable for NRIs to have both Aadhaar and Pan cards since the former is the best form of digital identity for NRIs. Passports are susceptible to identity frauds and to get stolen or lost. An Aadhaar card also solves various other problems such as inheritance in the case of NRIs having families settled in India and it also makes banking to and from India easier. It will make the future of NRI voting a less cumbersome process and will act as the primary identity for all future reforms and transactions.”

Speaking from a remitter’s perspective, Sudhesh Giriyan, COO of Xpress Money, says there is no compulsion to have an Aadhaar/PAN card while remitting money from abroad. From an Indian beneficiary’s standpoint, an Aadhaar or PAN card can serve as a means to fulfill the KYC requirement. However, other photo IDs, as stipulated by the regulator in India, can also serve the KYC need.

However, according to bankers such as Joseph Thomas, senior vice-president and chief representative at IndusInd Bank: “NRIs surely may need an Aadhaar card for transaction purposes but it will be wise to wait for a formal government announcement on it. There are alternative proofs of identity available such as passports and PAN cards.”