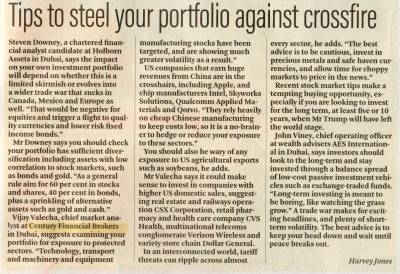 As if stock markets did not face enough uncertainty, investors now face the added threat of a trade war between the world’s two largest economies.

US President Donald Trump’s trigger finger has been itching for years, and last month he fired his opening protectionist salvo, threatening import tariffs on steel and aluminium.

China shot back with tariffs of its own and if the war escalates UAE-based investors could get caught up in the crossfire.

Mr Trump may claim that “trade wars are good, and easy to win”, but history suggests the reverse. Should you run for cover?

Donald Trump has been bristling for a trade showdown with China for years, accusing the country of manipulating its currency and stealing US technology, and destroying thousands of jobs in the process.

On March 8 he backed words with action, announcing import tariffs of 25 per cent on steel and 10 per cent for aluminium, while exempting Canada, Mexico and possibly other allies.

On April 1, China responded by hiking tariffs by up to 25 per cent on 128 US products, including certain fruits and nuts. Mr Trump retorted by proposing 25 per cent tariffs on around 1,300 industrial technology, transport and medical products worth around $50 billion.

War talk continues to intensify, with China mooting 25 per cent tariffs on US imports worth $50bn including soybeans, autos and chemicals – designed to hurt swing states ahead of upcoming congressional mid-term elections.

The Dow shed another 572 points on Friday after Trump threatened $100bn of tariffs, warning that “rather than remedy its misconduct, China has chosen to harm our farmers and manufacturers”.

Chris Beauchamp, chief market analyst at online trading platform IG, says Trump’s latest escalation reinforces the idea that neither side is prepared to back down. “The risks of miscalculation are high, in this game of chicken no one wants to be seen to blink first.”

He says the US administration appears to be making things up as it goes along, adding to the sense of danger. “China’s retaliation has also surprised everyone in its size and scope, suggesting Beijing is in no mood to be trifled with.”

Rebecca O’Keeffe, head of investment at online trading and investment platform Interactive Investor, fears a chain reaction will drag more countries into the dispute. “Expect further turmoil in a world where China is not willing to turn the other cheek and Mr Trump likes to get the last word,” she says.

Others suggest this is mostly bluster. Guy Foster, head of research at financial planning firm Brewin Dolphin, notes that several weeks of public consultation will follow before US tariffs bite. “China has given US agricultural and aeronautic businesses and workers time to lobby for a climbdown.”

Ross Teverson, manager of the Jupiter Global Emerging Markets Fund, is also relaxed. “Mr Trump’s bark is worse than his bite. Despite the protectionist rhetoric, a sensible agreement on trade between the two nations will eventually prevail.”

He says Mr Trump typically begins negotiations from an extreme position to strengthen his bargaining power, before ultimately agreeing upon a middle-ground. “Just over a year ago, investors were taking Mr Trump at his word and considered it quite probable that the US would abandon the North American Free Trade Agreement (Nafta). Today, the likely outcome is simply a set of minor updates.”

Mr Teverson adds: “As is often the case with Mr Trump, the headlines overemphasise the worst-case scenario, and investors should avoid making rash decisions.”

History shows that protectionist wars are bad, and hard to win. The Smoot-Hawley Tariff Act of 1930 in the US, which imposed punitive duties on more than 20,000 imports, triggered retaliatory action that slashed US exports by half, aggravating the Great Depression and fuelling the rise of fascism.

In 2002, George W Bush gave steel tariffs another go but withdrew them after just 21 months, amid pressure from US businesses, threats of retaliation from Europe and the World Trade Organisation declaring them illegal.

It also invites retaliation, he says: “The risk is a mutually reinforcing cycle of escalation with spiralling costs to all involved.”

Mr Dehn says abandoning free trade does not just threaten China, but could undermine key allies such as the UK and Europe at a critical time. “The EU is only just pulling back from the eurozone debt crisis and can ill afford an external shock to exports from its largest trader partner, while the UK needs free trade with America more than ever after Brexit.”

Mr Dehn suggests abandoned trading partners should seek solace in the arms of China, whose economy is on course to be two to three times larger than the US by 2050. “China’s financial markets are destined to replace US markets as the world’s benchmarks for stocks, bonds and currencies in exactly the same way US markets previously replaced the UK.”

Mr Trump’s war talk could actually be mask domestic failings, Mr Dehn suggests. “The Trump administration does not appear to understand that the reason some American companies are struggling to compete is that US productivity is in decline and the dollar is seriously overvalued. Current policies will not solve these problems.”

In contrast, China’s policy framework aims at greater openness in a bid to achieve President Xi Jinping’s ambition of making China the next economic and financial hegemon. “We expect China to fill every vacuum left behind as America shrinks from the world.”

Kim Catechis, head of emerging markets at fund manager Legg Mason Martin Currie, believes an all-out trade war remains unlikely but savvy investors can use today’s uncertainty as an entry point into Chinese and emerging markets. “These trade restrictions will only serve to accelerate the rapid growth of intra-regional trade to the exclusion of the US, further shifting the axis of world trade in favour of emerging markets.”

He says Mr Trump has given fresh impetus to three ongoing trade-related developments that could help China forge ahead of the US.

China is also looking to recreate the ancient Silk Road, through its Belt and Road initiative, which will speed up trade with 65 nations.

Finally, it is now pressing ahead with the Trans-Pacific Partnership (TPP), alongside 11 countries including Mexico, Peru, Chile and Malaysia, despite last year’s US withdrawal. On free trade, it is seizing the moral high ground.

Mr Trump may feel China has more to lose, given that its exports to the US last year totalled $506bn last year, against imports of just $130bn, but even if he does win his war, it could prove a pyrrhic victory.

Steven Downey, a chartered financial analyst candidate at Holborn Assets in Dubai, says the impact on your own investment portfolio will depend on whether this is a limited skirmish or evolves into a wider trade war that sucks in Canada, Mexico and Europe as well. “That would be negative for equities and trigger a flight to quality currencies and lower risk fixed income bonds.”

Mr Downey says you should check your portfolio has sufficient diversification including assets with low correlation to stock markets, such as bonds and gold. “As a general rule aim for 60 per cent in stocks and shares, 40 per cent in bonds, plus a sprinkling of alternative assets such as gold and cash.”

Vijay Valecha, chief market analyst at Century Financial Brokers in Dubai, suggests examining your portfolio for exposure to protected sectors. “Technology, transport and machinery and equipment manufacturing stocks have been targeted, and are showing much greater volatility as a result.”

US companies that earn huge revenues from China are in the crosshairs, including Apple, and chip manufacturers Intel, Skyworks Solutions, Qualcomm Applied Materials and Qorvo. “They rely heavily on cheap Chinese manufacturing to keep costs low, so it is a no-brainer to hedge or reduce your exposure to these sectors.”

You should also be wary of any exposure to US agricultural exports such as soybeans, he adds.

In an interconnected world, tariff threats can ripple across almost every sector, he adds. “The best advice is to be cautious, invest in precious metals and safe haven currencies, and allow time for choppy markets to price in the news.”

Recent stock market tips make a tempting buying opportunity, especially if you are looking to invest for the long term, at least five or 10 years, when Mr Trump will have left the world stage.

John Viney, chief operating officer at wealth advisers AES International in Dubai, says investors should look to the long-term and stay invested through a balance spread of low-cost passive investment vehicles such as exchange traded funds (ETFs). “Long-term investing is meant to be boring, like watching the grass grow.”

A trade war makes for exciting headlines, and plenty of short-term volatility. The best advice is to keep your head down and wait until peace breaks out.