Tesla's share price has tripled in value, but is it time to sell? 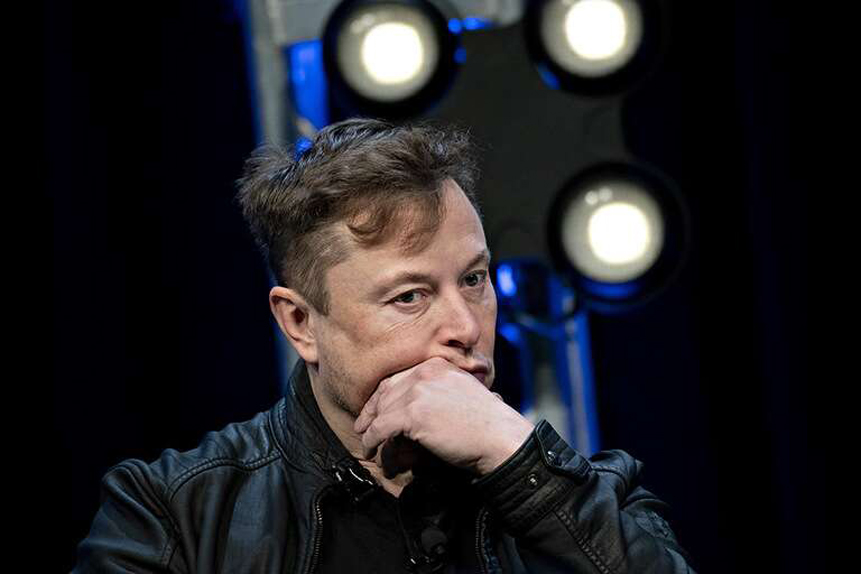 In its recently announced results, Tesla [TSLA] revealed a Q2 net gain of $104m, a fourth consecutive profit which makes it eligible for the S&P500. Indeed, Elon Musk’s electric vehicle maker has been on a roll in 2020 – its share price has more than tripled since January – and its July market capitalisation peak of $325bn made it the most valuable car-maker in the world, worth nearly double that of its nearest rival Toyota.

Musk is certainly reaching for the stars at the moment – he enjoyed a double celebration at the beginning of the month as his space enterprise SpaceX completed its first successful private “taxi service” to the International Space Station, shortly before his Starship spacecraft complete a launchpad “hop” that could open up passenger services to the Moon and Mars; but has the hype around Musk and SpaceX boosted Tesla’s share price at all?

Not quite, having taken such a giant step forward, Tesla stock suddenly took one small step backwards as its share price began to hover below the $1,500 mark. 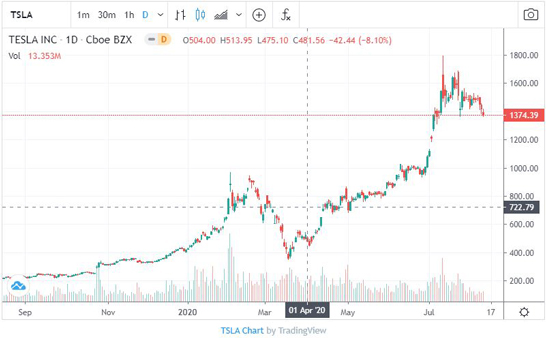 Within 24 hours of Tesla's Q2 results announcement on 22 July, the share price started to dip – despite far-better-than-expected results. Fresh off an all-time share price high of $1,643, achieved on 20 July, Tesla announced an adjusted EPS of $2.18 against an expected $0.03, and $6.04bn in revenues revenue versus an expected $5.37bn.

These figures, which included higher-than-anticipated vehicle sales at a time where the rest of the automotive industry is suffering, brought optimism from some analysts. Jed Dorsheimer, an analyst at Canaccord Genuity, increase his share price target from $650 to $1,623, maintaining a hold rating on the stock, adding that upcoming data announcements about Tesla’s Semi and Cybertruck could boost its price even further. Wedbush, meanwhile, bumped its price target up from $1,250 to $1,800.

But despite such bullish price targets following the solid Q2 release, there is still plenty of scepticism that the company is overvalued. According to MarketBeat, just five of 34 Wall Street analysts covering the stock have “buy” ratings, while 16 have “hold ratings” and 13 “sell” – hardly an endorsement of confidence.

“Investors are left with a conundrum of two forces,” wrote Adam Jonas, Morgan Stanley’s MD, Research. “Does this outstanding 2Q result make the stock easier to own … or does it mark a ‘top’ where it may be best time to sell?”

JP Morgan labelled Tesla’s share price as “highly overvalued” compared to the likes of Toyota and Vauxhall, especially given the fact that the two rivals combined sold more vehicles and generated more EBIT last year. JP Morgan automotive equity research analyst Ryan Brinkman also said that other manufacturers catching up with Tesla’s technology would bring its value down. “As more and more automakers develop and market their own electric vehicles, we expect the need to purchase such credits from Tesla will decline over time," he said.

Meanwhile, Citi Research analyst Itay Michaeli suspects Tesla’s share price has merely piggy-backed on a surge in stocks of Chinese electric vehicles, such as Nio [NIO] (580% between mid-March and 16 July).

Michaeli cited a “lack of evidence to support the recent narrative in the stock, namely that Tesla is already experiencing seemingly 'unlimited' demand that's decoupled from autos, that traditional and emerging competitors stand little chance, that FSD/AV [fully self-driving technology] is industry-leading and that Tesla should be valued vs. large Tech names,” when setting his $450 share price target in mid-July.

More clues to Tesla’s future performance may come from its “Battery Day” on September 22, where it will unveil new Tesla technologies that have been delayed throughout the year. While Covid-19 has forced other companies into virtual product launches, Musk has been determined to hold an “in-person” event later this year to showcase expected significant advances in battery cost and durability, thought to include a downward shift in unit price by moving battery manufacture in-house.

Then there’s Tesla’s new-found eligibility for the S&P 500. Entry is far from guaranteed – “the Index Committee takes several factors into account such as sector balance and size representation,” said an S&P Dow Jones Indices spokesman – but if Tesla does join, it brings investors new challenges. In a move that could happen at any time, Tesla would become the highest-valued company ever to be added to the index – and at current prices across the index, managers of passive funds would have to sell between $35bn to $40bn of shares in the rest of the index’s companies to make a hole big enough to fit purchases of Tesla shares, Vanguard Group portfolio manager Gerry O’Reilly told Bloomberg. “Assuming it’s going to be added, it’ll be an all-hands-on-deck type of trading,” he said.

Demand from index traders may push Tesla’s price higher, but O’Reilly believes there are “all sorts of crosscurrents” – not least that Tesla shareholders may see that demand as an opportunity to get out at the top, which could cancel out any price hike.

These factors will be key in determining whether Musk and Tesla’s share price stall is temporary – or whether it will continue to move up through the gears.