The National – Does the Brexit decision present an unmissable buying opportunity? 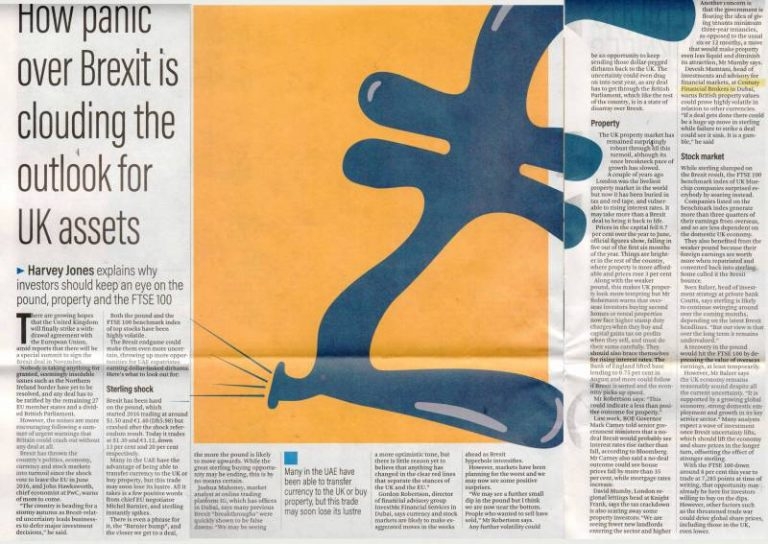 Investors should keep an eye on the pound, UK property and the FTSE 100

There are growing hopes that the UK will finally strike a withdrawal agreement with the EU, amid reports that there will be a special summit to sign the Brexit deal in November.

Nobody is taking anything for granted, seemingly insoluble issues such as the Northern Ireland border have yet to be resolved, and any deal has to be ratified by the remaining 27 EU member states and a divided British Parliament.

However, the noises are more encouraging following a summer of urgent warnings that Britain could crash out without any deal at all.

Brexit has thrown the country’s politics, economy, currency and stock markets into turmoil since the shock vote to leave the EU in June 2016, and John Hawksworth, chief economist at PwC, warns of more to come. “The country is heading for a stormy autumn as Brexit-related uncertainty leads businesses to defer major investment decisions.”

Both the pound and the FTSE 100 benchmark index of top stocks have been highly volatile. The Brexit endgame could make them even more uncertain, throwing up opportunities for UAE expats earning dollar-linked dirhams. Here’s what to look out for:

Many in the UAE have the advantage of being able to transfer currency to the UK or buy property, but this trade may be drawing to a close. All it takes is a few positive words from chief EU negotiator Michel Barnier, and sterling instantly spikes.

There is even a phrase for it, the “Barnier bump”, and the closer we get to a deal, the more the pound is likely to bump upwards.

While the great sterling buying opportunity may be ending, this is by no means certain.

Joshua Mahoney, market analyst at online trading platform IG, which has offices in Dubai, says many previous Brexit “breakthroughs” were quickly shown to be false dawns. “We may be seeing a more optimistic tone, but there is little reason yet to believe that anything has changed in the clear red lines that separate the stances of the UK and the EU.”

However, markets have been planning for the worst and we may now see some positive surprises. “We may see a further small dip in the pound but I think we are now near the bottom. People who wanted to sell have sold,” Mr Robertson says.

Any further volatility could be an opportunity to keep sending those dollar-pegged dirhams back to the UK. The uncertainty could even drag on into next year, as any deal has to get through the British Parliament, which like the rest of the country, is in a state of disarray over Brexit.

The UK property market has remained surprisingly robust through all this turmoil, although its once breakneck pace of growth has slowed.

A couple of years ago London was the liveliest property market in the world but now it has been buried in tax and red tape, and vulnerable to rising interest rates. It may take more than a Brexit deal to bring it back to life.

Prices in the capital fell 0.7 per cent over the year to June, official figures show, falling in five out of the first six months of the year. Things are brighter in the rest of the country, where property is more affordable and prices rose 3 per cent

Along with the weaker pound, this makes UK property look more tempting but Mr Robertson warns that overseas investors buying second homes or rental properties now face harsher face higher stamp duty charges when they buy and capital gains tax on profits when they sell and must do their sums carefully.

They should also brace themselves for rising interest rates. The Bank of England lifted base lending to 0.75 per cent in August and more could follow if Brexit is sorted and the economy picks up speed. Mr Robertson says: “This could indicate a less than positive outcome for property.”

Another concern is that the government is floating the idea of giving tenants minimum three-year tenancies, as opposed to the usual six or 12 months, a move that would make property even less liquid and diminish its attraction, Mr Mumby adds.

Devesh Mamtani, head of investments and advisory (financial markets), at Century Financial Brokers in Dubai, warns British property values could prove highly volatile in relation to other currencies. “If a deal gets done there could be a huge up move in sterling while failure to strike a deal could see it sink. It is a gamble.”

While sterling slumped on the Brexit result, the FTSE 100 benchmark index of UK blue-chip companies surprised everybody by soaring instead.

Companies listed on the benchmark index generate more than three quarters of their earnings from overseas, and so are less dependent on the domestic UK economy.

They also benefited from the weaker pound because their foreign earnings are worth more when repatriated and converted back into sterling. Some called it the Brexit bounce.

Sven Balzer, head of investment strategy at private bank Coutts, says sterling is likely to continue swinging around over the coming months, depending on the latest Brexit headlines. “But our view is that over the long term it remains undervalued.”

A recovery in the pound would hit the FTSE 100 by depressing the value of overseas earnings, at least temporarily.

However, Mr Balzer says the UK economy remains reasonably sound despite all the current uncertainty. “It is supported by a growing global economy, strong domestic employment and growth in its key service sector.”

Many analysts expect a wave of investment once Brexit uncertainty lifts, which should lift the economy and share prices in the longer turn, offsetting the effect of stronger sterling.

With the FTSE 100 down around 8 per cent this year to trade at 7285 at time of writing, that opportunity may already be here for investors willing to buy on the dips. However, other factors such as the threatened trade war could drive global share prices, including those in the UK, even lower.