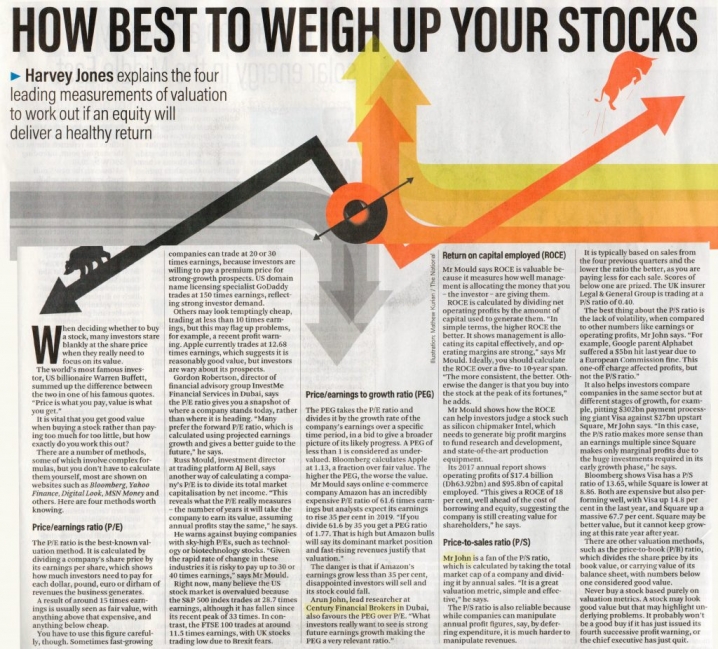 By understanding metrics such as the price to earnings ratio, investors have a better idea of whether an equity is a good buy or not.

When deciding whether to buy a stock, many investors stare blankly at the share price when they really need to focus on its value.

The world’s most famous investor, US billionaire Warren Buffett, summed up the difference between the two in one of his famous quotes. “Price is what you pay, value is what you get.”

It is vital that you get good value when buying a stock rather than paying too much for too little, but how exactly do you work this out?

There are a number of methods, some of which involve complex formulas, but you don’t have to calculate them yourself, most are shown on sites such as Bloomberg, Yahoo! Finance, Digital Look, MSN Money and others.

Here are four worth knowing.

The P/E ratio is the best-known valuation method. It is calculated by dividing a company’s share price by its earnings per share, which shows how much investors need to pay for each dollar, pound, euro or dirham of revenues the business generates.

A result of around 15 times earnings is usually seen as fair value, with anything above that expensive, and anything below cheap.

You have to use this figure carefully, though. Sometimes fast-growing companies can trade at 20 or 30 times earnings, because investors are willing to pay a premium price for strong-growth prospects. US domain name licensing specialist GoDaddy currently trades at 150 times earnings, reflecting strong investor demand.

Others may look temptingly cheap, trading at less than 10 times earnings, but this may flag up problems, for example, a recent profit warning. Apple currently trades at 12.68 times earnings, which suggests it is reasonably good value, but investors are wary about its prospects.

Gordon Robertson, director of financial advisory group InvestMe Financial Services in Dubai, says the P/E ratio gives you a snapshot of where a company stands today, rather than where it is heading. “Many prefer the forward P/E ratio, which is calculated using projected earnings growth and gives a better guide to the future.”

Russ Mould, investment director at online trading platform AJ Bell, says another way of calculating a company’s P/E is to divide its total market capitalisation by net income. “This reveals what the P/E really measures – the number of years it will take the company to earn its market value, assuming annual profits stay the same.”

He warns against buying companies with sky-high P/Es, such as technology or biotechnology stocks. “Given the rapid rate of change in these industries it is risky to pay up to 30 or 40 times earnings.”

Right now, many believe the US stock market is overvalued because the S&P 500 index trades at 28.7 times earnings, although it has fallen since its recent peak of 33 times. In contrast, the FTSE 100 trades at around 11.5 times earnings, with UK stocks trading low due to Brexit fears.

The PEG takes the P/E ratio and divides it by the growth rate of the company’s earnings over a specific time period, in a bid to give a broader picture of its likely progress. A PEG of less than 1 is considered as undervalued. Bloomberg calculates Apple at 1.13, a fraction over fair value. The higher the PEG, the worse the value.

Mr Mould says online global retail e-commerce firm Amazon has an incredibly expensive P/E ratio of 61.6 times earnings but analysts expect its earnings to rise 35 per cent in 2019. “If you divide 61.6 by 35 you get a PEG ratio of 1.77. That is high but Amazon bulls will say its dominant market position and fast-rising revenues justify that valuation.”

The danger is that if Amazon’s earnings grow less than 35 per cent, disappointed investors will sell and its stock could fall.

Mr Mould says ROCE is valuable because it measures how well management is allocating the money that you – the investor – are giving them.

ROCE is calculated by dividing net operating profits by the amount of capital used to generate them. “In simple terms, the higher ROCE the better. It shows management is allocating its capital effectively, and operating margins are strong.”

Ideally, you should calculate the ROCE over a five to 10-year span. “The more consistent, the better. Otherwise the danger is that you buy into the stock at the peak of its fortunes.”

Mr Mould shows how the ROCE can help investors judge a stock such as silicon chipmaker Intel, which needs to generate big profit margins to fund research and development, and state-of-the-art production equipment.

Its 2017 annual report shows operating profits of $17.4 billion and $95.8bn of capital employed. “This gives a ROCE of 18 per cent, well ahead of the cost of borrowing and equity, suggesting the company is still creating value for shareholders.

Mr John is a fan of the P/S ratio, which is calculated by taking the total market cap of a company and dividing it by annual sales. “It is a great valuation metric, simple and effective,” he says.

The P/S ratio is also reliable because while companies can manipulate annual profit figures, say, by deferring expenditure, it is much harder to manipulate revenues.

It is typically based on sales from the four previous quarters and the lower the ratio the better, as you are paying less for each sale. Scores of below one are prized. UK insurer Legal & General Group is currently trading at a P/S ratio of 0.40.

The best thing about the P/S ratio is the lack of volatility, when compared to other numbers like earnings or operating profits, Mr John says. “For example, Google parent Alphabet suffered a $5bn hit last year due to a European Commission fine. This one-off charge affected profits, but not the P/S ratio.”

It also helps investors compare companies in the same sector but at different stages of growth, for example pitting $302bn payment processing giant Visa against $27bn upstart Square, Mr John says. “In this case, the P/S ratio makes more sense than an earnings multiple since Square makes only marginal profits due to the huge investments required in its early growth phase.”

Bloomberg shows Visa has a P/S ratio of 13.65, while Square is lower at 8.86. Both are expensive but also performing well, with Visa up 14.83 per cent in the last year, and Square up a massive 67.7 per cent. Square may be better value, but it cannot keep growing at this rate year after year.

There are other valuation methods, such as the price-to-book (P/B) ratio, which divides the share price by its book value, or carrying value of its balance sheet, with numbers below 1 considered good value.

Never buy a stock based purely on valuation metrics. A stock may look good value but that may highlight underlying problems. It probably won’t be a good buy if it has just issued its fourth successive profit warning, the chief executive has just quit or it is launching an urgent rights issue.