The National – Is it wise to invest in renewable and green energy? 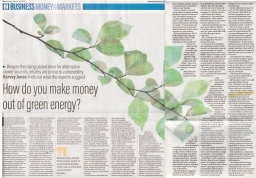 Despite the global drive for alternative power sources, returns are prone to vulnerability

It is not easy being green, as long-term investors in alternative and renewable energy have discovered to their cost.

Despite the global push for renewables, and rapid spread of wind and solar power, returns have been volatile. Green principles have come at a price. This is a disruptive sector, but is prone to disruption itself. Clean, green energy is the future – but will it leave your portfolio in the red?

The future is arriving fast as renewables now make up nearly 20 per cent of global energy consumption, according to the Global Renewable Energy Policy Network (Ren21).

Solar photovoltaic, onshore and offshore wind and hydroelectric power plants will make up about 50 per cent of the world’s energy mix by 2050, and 85 per cent of global electricity, DNV GL’s Energy Transition Outlook predicts.

It says coal use is already past its peak, while demand for oil is set to flatten from 2020 and plunge after 2028, with gas taking its mantle as the single biggest source of global energy from 2034.

We will see the impact in our homes and also on our streets, with electric vehicles set to achieve cost parity with internal combustion vehicles in 2022, and half of all global vehicle sales electric by 2033.

This is a massive global shift as the world battles to limit global warming to no more than 2 per cent above pre-industrial levels in line with the Paris Agreement.

Yet private investors with green stocks or funds will not necessarily reap the benefit. Hotly hyped new technology can quickly become superseded and too many bright ideas become early-stage burn ups.

Electric car maker Tesla is the latest green pioneer to look vulnerable. It is now the most shorted stock in the world, as it battles to raise capital to pay debts and fund operations, requiring an estimated $10 billion by 2020, according to Goldman Sachs.

Again, performance has been patchy but things are picking up. BlackRock GF New Energy, launched in 2001, is up 58 per cent in the past five years, against 35 per cent for its benchmark specialist fund sector.

Performance elsewhere has been less impressive, for example, iShares Global Clean Energy ETF, which tracks the performance of the top 30 global companies in the clean energy sector, is up just 29 per cent over the same period. Invesco Solar ETF is a fiery fund, falling 63 per cent in 2011 then jumping a whopping 123 per cent in 2013. Measured over five years, it is down 37 per cent.

Russ Mould, investment director at online trading platform AJ Bell, says alternative energy is a tricky sector despite its massive potential. “Initial adoption could take longer than expected and early movers fall by the wayside,” he says. “However, once costs fall to a certain point, mass take-up should suddenly become much more economic.”

Backing the right stock and technology is one challenge, politicians are another. “Regulatory and political interference, such as President Donald Trump’s decision to dump the Paris Agreement, are impossible to predict,” says Mr Mould. “So beware any company or industry that is heavily reliant on government subsidies, which can be withdrawn at any moment.”

Mr Mould recommends spreading your risk by investing in a broad-based fund that targets sustainable development and improved environmental, social and corporate governance, such as the Stewart Worldwide Sustainability Fund. This wider remit allows it to invest in mainstream companies pursuing a sustainability agenda, such as consumer goods companies Unilever and Henkel.

Dzmitry Lipski, an investment analyst at online trading platform Interactive Investor, says alternative energy is an exciting opportunity right now as many stocks are trading at a discount to the broader market. “Energy prices are recovering from recent lows and this should further boost demand for alternatives.”

He tips Multipartner Sicav RobecoSam Smart Energy, a €650 million (Dh2.77bn) offshore fund based in Luxembourg that invests in “future-oriented energy” such as renewables and energy distribution, management and efficiency. It has performed well, rising 77 per cent in the past five years, according to Trustnet.com.

Both funds are relative minnows, $141m and $88m respectively, which shows how slow investors have been to turn onto the sector.

For those brave enough to buy individual stocks, Adam Forsyth, alternative energy research analyst at Cantor Fitzgerald Europe, picks out Simec Atlantis Energy, which he describes as a major UK renewable energy development company with a pipeline of strong assets, including tidal and waste-to-energy projects. “The share price has slipped to around £0.24 (Dh1.13) but we have a target price of £0.75, and it has the potential to go above £3.”

Mr Brown also tips Smurfit Kappa, Europe’s largest paper packaging producer, which is caught at the centre of the waste debate. “We see strong financial opportunities for those that can do it sustainably.”

As in any radical transformation there will be winners and losers, and incumbent energy companies could struggle if the revolution gathers pace.

Geoff Wan, credit analyst at Hermes Investment Management, says despite Mr Trump’s pushback the US is going green faster than people realise amid a nationwide wide push towards a low-carbon economy and pressure on big energy companies to green their operations.

Nick Stansbury, a fund manager on the global equity team at Legal & General Investment Management, says the global backlash against plastic pollution could also hit the petrochemical and oil industries. “At least eight million tonnes of plastic enter the ocean each year. If current trends continue, there will be the same number of tonnes of plastic in the ocean as fish in 30 years.”

Governments are committed to reducing plastic usage and if global recycling for single-use plastics hits 50 per cent in 2025, this cut could daily demand by the equivalent of 2.5 million barrels a day, he calculates. “Oil demand could peak much sooner, potentially by as much as five years.”

Vijay Valecha, chief market analyst at Century Financial Brokers in Dubai, says the transformation to green energy is irreversible, the big question is how investors can ride it. “The industry is a graveyard of once-promising technologies. It would be prudent to invest in broad themes rather than betting on individual stocks.”

So instead of putting money into Tesla, invest in lithium battery technology, he says. “The electric cars of the future may be powered by lithium and investors can ride this trend by investing in the Global X Lithium & Battery Tech ETF, which spreads risk by invests into an array of lithium producers.”

Steven Downey, chartered financial analyst candidate at Holborn Assets in Dubai, says investors should approach with caution. “For clients with a strong ethical and environmental disposition, this can be a good way to invest, but beware the hype and the risk of overpaying as this sector is riskier than many realise.”