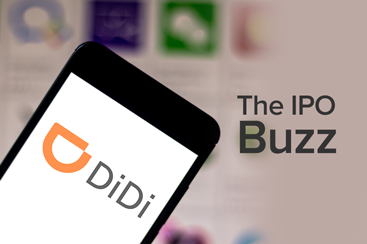 All you need to know about trading on Didi IPO

Didi or Didi Chuxing refers to China-based ride-hailing company Xiaoju Kuaizhi. It is set to go public on an American stock exchange in 2021 itself.

Explore all the nitty-gritty you must have at your fingertips regarding the much talked-about Didi stock IPO (or initial public offering), the company, as well as how to trade on Didi stock when it goes public.

Here’s Why Didi is opting for a US Exchange

Didi has chosen to list on either the NASDAQ or the New York Stock Exchange (NYSE), in spite of tightening US rules and regulations for China-headquartered companies.

Notably, in March 2021, the US Securities and Exchange Commission (or SEC) implemented the Holding Foreign Companies Accountable Act, by which the Chinese companies that do not abide by the new strict guidelines could be delisted from US exchanges.

Didi initially considered to list in Hong Kong but altered its plans owing to fears that local scrutiny based on issues like unlicensed drivers and vehicles might induce delay in the IPO process. Moreover, Didi’s prospectus cautioned that in case China’s recovery is slow, “our business… and financial condition could be materially and adversely affected.”

Didi is anticipated to go public on June 30, 2021, under the ticker ‘DIDI’. One can keep an eye on upcoming IPOs due to debut on our platform.

Didi intends to sell 288 million American Depositary Shares (or ADS) between $13 and $14 each. Didi’s IPO is seeking to rake in up to $4 billion altogether.

This sum is likely to make Didi IPO the second largest US listing of a China-based company compared with Alibaba’s listing in 2014, which raked in $25 billion, and marking it as the sixth-largest listing in the US over the past decade.

Per Financial Times estimate Didi’s valuation is likely to hit over $65 billion, while The Wall Street Journal predicts the figure might go beyond $70 billion. Reuters expects the figure could even make it to $100bn.

The top end of this range would indicate a similar market value to that of Uber Technologies, with a market cap close to $90.7 billion. Notably, Uber Technologies owns a 12.8% stake in Didi, having divested its China-based ride-hailing arm to the company in 2016. Additional major shareholders consist of the SoftBank Vision Fund, with a holding of 21.5%.

Lyft, another prominent name in the ride-hailing space, has a market cap of nearly $18.9 billion, while Singapore-based rival Grab is anticipated to list this year through a special purpose acquisition company (SPAC) deal with an expected $40 billion in valuation. Nevertheless, a fall in Grab’s SPAC partner Altimeter’s value is believed to have caused a lag.

It is conceivable that Didi Chuxing IPO will mark itself as one of the most highly valued companies in its vertical. Investors must keep a check on the company’s valuation when its pricing is declared and assess with its rivals before buying.

Didi reported revenues of $21.6 billion in 2020. In the most recently reported quarter of 2021, it raked in revenues of $6.4 billion, with $837 million in net income calculated before shareholder payouts.

As a comparative analysis, Uber Technologies’ latest quarterly revenues (excluding an accrual for historical claims pertaining to UK drivers) came in at $3.5 billion. The company reported a net loss of $108 million. Meanwhile, Lyft reported revenues of $609 million and adjusted net loss of $114.1 million. Please note that past performance is not suggestive of future results.

How to trade on Didi’s IPO

What are the potential risks for Didi?

Potential headwinds persist, particularly considering the slower-than-expected pandemic recovery amid regulatory challenges, both across China and the US. Prospective investors must go through Didi’s prospectus for the detailed list of risk factors. Nevertheless, we highlight the key risks that you must take a note of, below:

Who is Didi’s competition?

Globally, key rivals operating in Didi’s space are Uber Technologies (UBER) and Lyft (LYFT). The former owns a 12.8% stake in Didi, so it might rather look for synergies over competition. On the other hand, Lyft could impose a significant obstacle to growth in the US. Interestingly, between September 2017 and April 2021, Uber’s US market share tumbled from 74% to 68%. This largely benefited Lyft with a share of 33% in 2021, per data from Bloomberg.

Also, Singapore-based Grab is set to IPO through a SPAC in 2021, with valuation presumed to be $40 billion. Grab is Southeast Asia’s largest technology platform, and it foresees its addressable market to hit $180 billion by 2025. If Didi eyes expansion in Asia, it might possibly come into close competition with Grab. Markedly, Didi’s Asia-based operations are so far restricted to Mainland China, Taiwan, Hong Kong, and Japan.

Where can I trade on Didi’s IPO?

You may spread bet or trade CFDs on Didi’s shares as it debuts, and its shares are listed on our Next Generation trading platform. These will be in our product library under Products > Shares > US. Otherwise, you could search for the term “Didi” in the search box.

What is the lock-up period on Didi’s IPO?

Didi’s IPO might have a lockup period of 180 days. During this period, Didi insiders will not be able to sell shares. This may lead to share price volatility: for instance, in case insiders know something about the business which makes it a bad prospect, they could sell shares immediately post the lock-up period ends, causing a fall in the share price. Learn more about short selling stocks.

Who is underwriting the Didi IPO?

Didi’s IPO will be underwritten by US investment banks including Goldman Sachs, JPMorgan, and Morgan Stanley. Notably, JPMorgan and Goldman Sachs were also involved in Coupang’s IPO, which is 2021’s largest to date. Keep a track of other upcoming IPOs.

What risks does Didi’s IPO face from China’s antitrust probe into the company?

Per Reuters report on 17th June, China’s market regulator, the State Administration for Market Regulation (SAMR), had opened an antitrust probe into Didi. This is similar to those launched against other China-based US listed companies, including Alibaba Group and Tencent Holdings. The probe is investigating whether Didi unlawfully crushed smaller competitors, and the transparency of its pricing structure. Didi claims that, in case the regulator finds violations, the pricing and unfair competition breaches would be perceived as minor and be mitigated by the number of jobs the company has generated, so the company is not expecting a strong punishment.

Disclaimer: Century Financial Consultancy LLC (“CFC”) is Limited Liability Company incorporated under the Laws of UAE and is duly licensed and regulated by the Emirates Securities and Commodities Authority of UAE (SCA). Services offered by CFC include promotion and introduction of financial market products that are traded on margin and can result in losses that exceed deposits. Trading with leverage carries significant risk of losses and as such margin products may not be suitable for everyone; you should consider your investment objectives, risk tolerance and your level of experience with these products, and ensure that you understand the risks involved and seek independent advice from professionals/experts if necessary. CFC is not responsible or liable for any result, gain or loss, based on this information, in whole or in part. Refer to risk disclosure on our website.