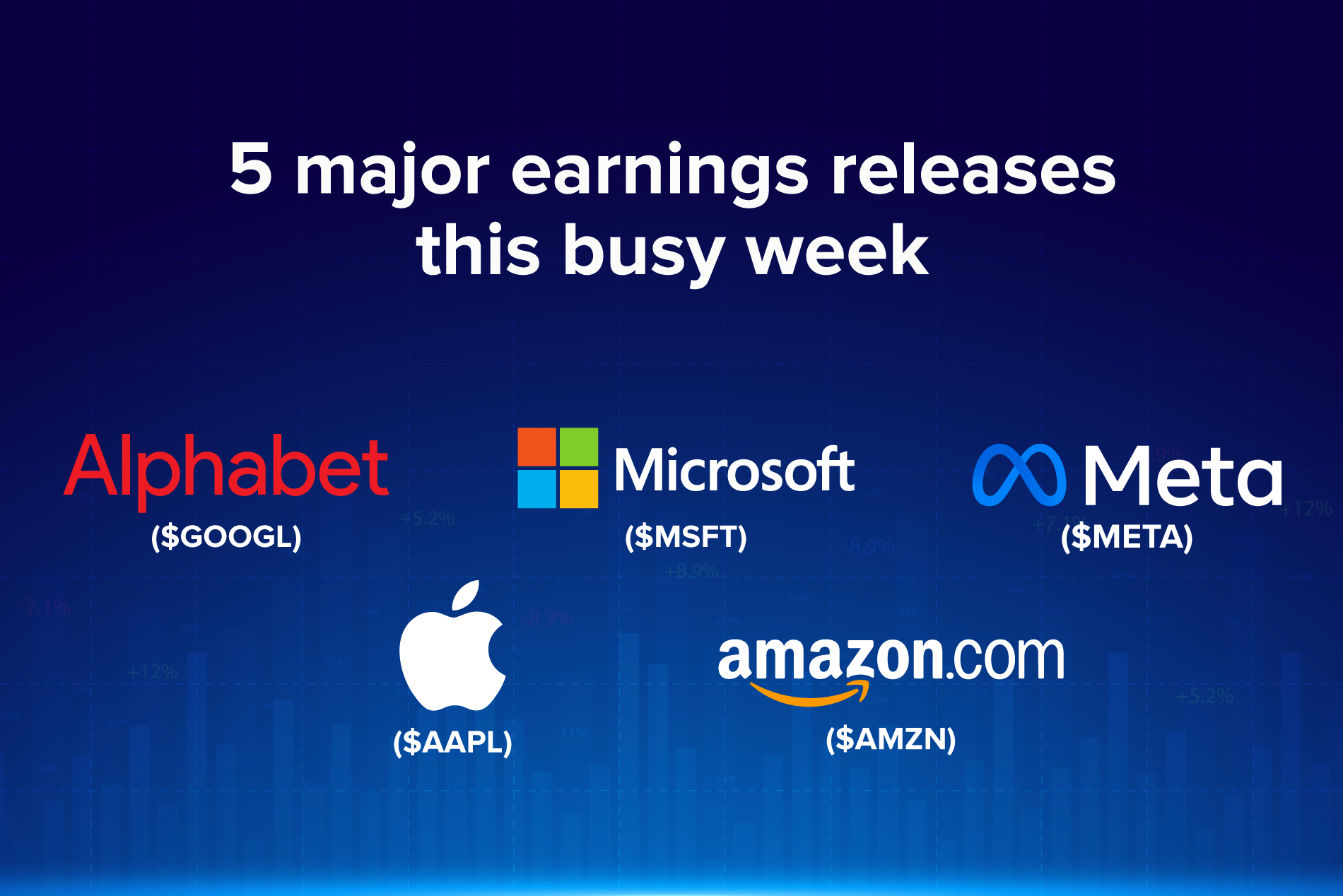 The second quarter (Q2) earnings season is in full swing, with more than 170 companies slated to release results through Friday, 29th July.

Investors will keenly watch some of the major heavy-weighted component stocks of the benchmark S&P 500 index. The list includes the big names — Microsoft (MSFT), Alphabet (GOOGL), Meta Platforms (META), Apple (AAPL), and Amazon (AMZN) — among others.

The busiest tech-heavy earnings week also happens to be the FOMC-loaded week, signalling a volatile trading week ahead. Major tech companies scheduled to report this week are expected to offer insights into the extent of the slowdown in the market.

How is the Q2 earnings scenario shaping up?

On average, companies have posted earnings that are 3.6% above estimates, lagging the five-year average of 8.8%.

The S&P 500 is reporting its lowest earnings growth since Q4 2020, on a year-over-year (YoY) basis. The second-quarter earnings season for the S&P 500 continues to be weaker than normal, as per FactSet.

Analysts typically assess the quarterly reports based on forecasted earnings and revenues and other financial metrics.

On the other hand, a company missing the estimates might result in a decline in its share price.

High inflation, rising input and labour costs, and recession fears do not portray a good picture of overall financial performance in the second quarter. Hence, it would be interesting to watch how companies are addressing the demand squeeze, and how are they attempting to tackle high costs.

Fundamentally, let us explore the factors likely to have set the tone for the impending Q2 earnings results this week (after markets close) for some of the biggest five companies:

*Data as of US markets close on July 25

However, the momentum in Alphabet’s Google Cloud Platform is expected to have continued in the to-be-reported quarter, backed by strategic investments and partnerships.

In the first quarter, Google Cloud revenues surged 43.8% YoY to $5.8 billion, accounting for 8.6% of the quarterly revenues.

Microsoft is expected to have benefited from strength in its Intelligent Cloud segment in the fourth quarter of fiscal 2022.

In the fiscal third quarter, revenues in Intelligent Cloud came in at $19.1 billion, up 26% YoY driven by 46% growth (49% on a constant currency basis) in Azure and other cloud services revenues.

Also, elevated costs and investments in hardware and VR might have hurt the bottom-line performance.

Also, investors would gauge Facebook’s update on its daily active users (DAUs) and monthly active users (MAUs), respectively. In the first quarter, DAUs climbed 4% YoY to 1.96 billion, while MAUs were up 3% to 2.94 billion.

Apple’s third-quarter fiscal 2022 top-line performance could have been negatively impacted by supply chain woes, as signalled by the iPhone maker during the fiscal second-quarter earnings call.

Investors would keenly watch whether the momentum in new iPhone and M1-powered MacBook Pro sales and adoption of the Apple Watch continued in the quarter under review.

However, Apple’s iPad sales fell 1.9% in the fiscal second quarter. It is to be seen whether supply constraints owing to the global chip shortage hurt the iPad sales in the fiscal third quarter as well.

Further, decade-high inflation globally resulting in increased labour and shipping costs and lower consumer demand concerns might have weighed on its core online retail business in the second quarter.

Also, sluggishness in online advertising spending could have been a headwind.

However, the company continues to be a cloud leader. In the first quarter, Amazon Web Services (AWS) revenues increased 36.6% to $18.44 billion. According to Synergy Research Group, Amazon continues to lead with its worldwide market share at 33% in Q1.