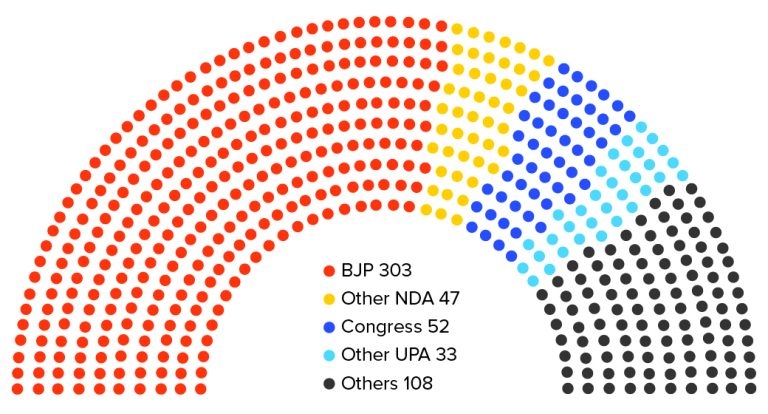 Indian Elections & the Stock Market May 23rd, 2019 was a historic day for Indian democracy. After decades, an incumbent PM won with such a landslide majority. So much so that final seat count of 303 secured by ruling party BJP eclipses major opposition parties like Congress & other regional ones by a huge count. The final picture of 17th Lok Sabha pretty much symbolizes the sentiment of the ordinary Indian – a Common man wanting a single party to govern & take the Indian growth story forward. This is against the status quo in the Indian political system which saw a regional party getting as few as 10 – 20 seats dictating national level policies & country’s best interest.

While a combination of nationalist rhetoric combined with other factors like slew of welfare programs & strongman personality might have helped PM Modi come back to power with bigger majority, all attention now turns towards the actual implementation of new policies & 2019 – 2020 budget that was presented on July 5th.The focus now turns completely to the actual ground level execution of government programs & its related effect on the Indian economic growth story. Indian equity indices Sensex & Nifty have already given a warning shot to government stakeholders – they have retraced by approx. 4 % since their early June highs. While global equity sell-off on the back of rising US – China tensions is sighted as one of the factors, Indian indices would not want to miss out their luster as a preferred investment destination amongst its emerging market peers. Indian markets have always relied heavily on FII equity & debt flows as a sentiment that either props up or causes its debacle

Historically, markets at best have failed to judge how the government will or should perform. While this is primarily on account of basic human emotions – fear and greed that drive average market sentiment, over the long run it is the actual economy performance that drives the market returns. Short term election impact on the market tends to be overshadowed by long run economic performance impact which has a more conspicuous effect on market.The below table clearly highlights the fact that over a long term there has always been an uptick in market sentiment post general election

Furthermore, below images which indicate Net FII & DII flows in Indian market depict the same story. Over the immediate short run following election outcome, there have been occasional spikes and downfall. However, over the longer run, the scenario average return to normal wherein the market returns are dictated by current market fundamentals prevalent at that time.

This year on YTD basis, Indian stock markets have received record FII inflows worth INR 55,000 Crores + (USD 7.5+ billion) with inflows being largest among Asian emerging markets. This is on the back of expectations that see Modi led government to continue with its reform agenda and furthermore come out with new policies & initiatives that support new job creation and ease the red tape prevalent amongst its bureaucracy  Majority of the Indian asset managers point to out to key reforms needed immediately in areas like job

creation, revival of public sector banks & fiscal debt management along with resolution of problems in areas like manufacturing & rural income distress.Sum and substance of the above point out to the fact that the causation effect of elections on stock markets at best is overwhelmingly present for short while. Once the realty kicks in, the initial euphoria dies down & market seemingly focus on actual economic growth & governments resolution of various problems at hand.