By Century Financial in Off The Wall 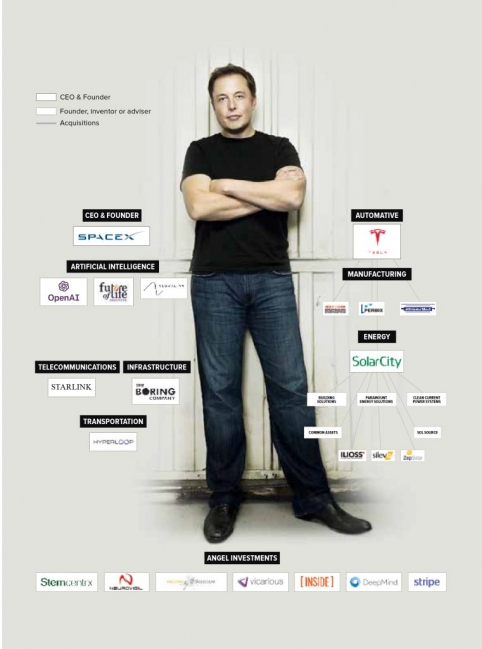 For years, Elon Musk has been imagined in the Iron Man suit.Since the death of Steve Jobs in 2011, there is the only person who possesses similar wild DNA. Some people call him paranoid, delusional and bipolar while for some he is the genius entrepreneur and the most important person alive.

After so many years of Musk and his basket of companies, he is definitely enthroned as the prince of technology. He has his kingdom which has followers who worship him like a God. By now, we all know what Musk has built. He is the co-founder of PayPal, Chairman of Solar City, architect of Tesla and CEO of SpaceX. Currently, Musk is involved in building a high-speed transportation system called Hyperloop.

Up recently, he shared his long-term vision to build a million person city on the red planet Mars over a period of 50 to 100 years. However, he looked firm on forming an outpost just in a decade. Musk’s Big Falcon Rocket (BFR), a 100 passenger spaceship is expected to finish by 2021.

While Musk was loved and respected for so many years, this year alone has brought ignominy to this Ironman. He engaged in an altercation with the Wall Street analysts over the Tesla earnings results and targeted short sellers. He accused a Thailand rescue diver of pedophilia, smoked weed with Joe Rogan, dated Grimes, and most importantly was fined by SEC for misleading conduct when he tweeted about making Tesla private and then backed off.

Tesla and Musk eventually settled with the Securities Exchange Commission, agreeing to pay $20 million each. Since then, Musk has been more careful about his tweets on Tesla. He did mention though he does not respect the SEC but the justice system. All the above flagrant behavior by the Tesla boss has narrowed down everything to one key question- Is Elon Musk, a superhero like Iron Man or his persona is reflecting on being more like alien symbiont Venom?

To assess this, we need to analyze him on his management style and human interaction. The questions we need to ask are –

a.)    How is he with people? This is not the first tech crack we have witnessed. Steve Jobs gave birth to iPhone and got the respect in the Silicon Valley. That does not make anyone a hero. There have been numerous complaints by Tesla employees on the working conditions in the company which has been blatantly neglected by Musk.

On the SpaceX front, the company settled a class-action lawsuit brought by former employees in 2017, paying out $4 million to workers who claimed they were underpaid and mistreated. It is clear that the working environment which Musk has created is not “fun” as he quotes.

b.)    Is he really trying to make a better world? Musk’s investments in electric cars, space exploration projects, solar city and finally the boring company has shown his interest in building a society where sustainable energy is primary. However, his actions and attitude represent his hunger for power. He proudly talks about forming colonies in Mars and prices the ticket to Mars for $200,000 which shows his hyper-capitalist vision.

c.)    Does he prioritize morals over higher profit? Many CEOs have in the past aimed for profit without caring about their conscience. That doesn’t make them a superhero. Musk has given money to advance his business interests to all sorts of organizations that go against his stated pro-science, pro-environmentalism, pro-immigration beliefs, including the Longhorn PAC and the National Republican Congressional Committee.

d.)    Is he honest? Musk is seen as a straightforward person who tweets whatever he wants or expresses his disappointment sometimes about SEC or less working hours. Frankly, that has what kept Tesla alive in spite of bad earnings for all these years. His impact on society is sure to have some benefits: he made electric cars famous, he is stressing on Artificial Intelligence, and he is exploring space and possibilities to reach on Mars.

But these benefits will be secondary, and the world Musk is working toward is one that will leave a lot of people abandoned, because it’s a world in which he takes taxpayer money to create transit systems—both on Earth and in space—that will be for-profit entities controlled by Elon Musk. He’s not going to save humanity but only humans who pay him what he demands.

For years Elon Musk has deceptively portrayed his image of a philanthropist, but what is great, is, in spinning the chronicles of his achievements. He is good in science, but he is no hero. He is not a humanitarian who wants to build a better world; in fact, he is just another techie in Silicon Valley who is idealized for inventing cool gadgets and creating buzz through his obnoxious tweets. He looked Tony Stark in the beginning but has turned to Venom now.